This article appeared in the June 9, 2022 edition of The Film Comment Letter, our free weekly newsletter featuring original film criticism and writing. Sign up for the Letter here. 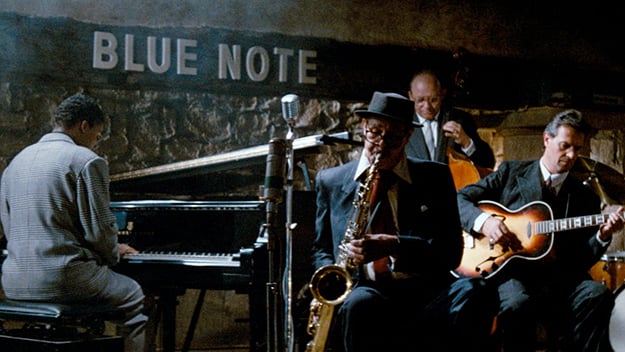 By the 1980s, jazz had lived several lives: as popular music, as avant-garde music, and finally as African-American classical music. This latter stage conferred a precarious status that simultaneously honored and cast in amber an artistic heritage whose greatest practitioners were devoted to moving the music forward, not waxing nostalgic. Bertrand Tavernier’s ’Round Midnight (1986), about a weary, alcoholic Black musician attempting to give his career a second wind in Paris, would seem in danger of contributing to this mythologization with its period setting, meticulously constructed and overtly artificial sets, and wistful adherence to the cliché of self-destructiveness as entwined with genius. Tavernier’s masterstroke, which elevates, complicates, and infuses the film with the authenticity he so desired, is to cast aging saxophonist-composer Dexter Gordon as the fictional Dale Turner—an aging saxophonist-composer befriended by a Parisian superfan who takes Dale in, tolerates his addictions and eccentricities, and helps him resume a financially viable career. The character of Dale was inspired by the lives and works of Lester Young and Bud Powell, fellow jazzmen Gordon revered and, in Powell’s case, collaborated with on two essential recordings. Tavernier welcomed Gordon as a close collaborator on virtually every aspect of the film. The result is spellbinding and, like Gordon himself, singular.

Gordon was a giant (literally: he was 6’5”) of bebop, the jazz movement born in 1940s New York that overtook the increasingly formulaic patterns of swing, pursuing a broader harmonic vocabulary, rhythmic variety, and seemingly esoteric melodies. But his personal style didn’t possess the velocity or angularity typical of bebop. As Dale says in the film, “You just don’t go out and pick a style off a tree one day. The tree’s inside you, growing naturally.” Gordon belonged to a transitional generation, making his most exciting records as jazz began to drift away from melodic adherence and tidy structures altogether and embrace wild dynamics, exploratory rigor, and abrasive dissonance. ’Round Midnight’s story begins in 1959, the year Young died, and the year Ornette Coleman released The Shape of Jazz to Come—a work contemporaneous, and equivalent in its seismic cultural impact, to the first films of the French New Wave. ’Round Midnight smartly pays little heed to the emergence of avant-gardists like Coleman, Albert Ayler, or Archie Shepp, an elision that serves to remind us just how radical the stars of bebop already were at the time. A rare few, like John Coltrane and Joe Henderson, moved seamlessly between styles, while many others, like Powell, Sonny Clark, and Eric Dolphy, didn’t live long enough to fully explore the possibilities of the new language.

Gordon stood somewhat outside all of this, doing his own thing and, from the ’60s on, making only slight concessions to innovation. He’d basically retired from music by the time he was offered ’Round Midnight, making his appearance in the film at once ghostlike and affectingly corporeal. Dale’s every utterance is accompanied by a reedy croak that exceeds his words. His gaze is soft, as though he doesn’t want to see anything too well. He has a broad, toothy smile that springs forth suddenly and transforms his face. Even in moments where lovers, colleagues, or club owners attempt to reprimand him, he never appears concerned: he remains a becalmed observer of his own erratic fortunes—and of the gradual decline in his abilities. From his very first performance in the film, seated on a cramped stage in a modestly sized Paris club, one can hear a certain sluggishness in Dale’s playing, a lumbering quality to match his stride. Gordon’s sound at this point in his career was far from the bold, spacious music of his peak years, but it is perfect for Dale. It’s captivating—at times extremely moving—in its struggle: you hear a lifetime in his cloudy phrasing and in the absence of the turns he can’t quite manage anymore. I’m loath to cite an Oscar nod as meaningful validation, but it says something that this sexagenarian saxophonist, by then somewhat forgotten, who had never appeared in a substantial role (aside from the 1960 Los Angeles production of Jack Gelber’s play The Connection), was nominated for Best Actor. (He lost to Paul Newman as “Fast Eddie” Felson in The Color of Money—a turn, as it happens, hugely informed by jazz.) It’s hard to think of many other performances that possess Gordon’s exquisite balance of charisma and control, authenticity and invention, not to mention his idiosyncratic sense of rhythm and emphasis.

Gordon’s co-stars include François Cluzet as Francis, the other half of the film’s fraught bromance and ultimately a somewhat utilitarian character; Martin Scorsese as an intimidating New York club manager; and a jaw-dropping battalion of fellow jazzmen: Freddie Hubbard, John McLaughlin, Pierre Michelot, Bobby Hutcherson (whose endearing character, when not onstage, can be found slow-cooking soul food in his Paris flat). The cast also includes every member, save the leader, of the mid-’60s quintet that propelled Miles Davis into the stratosphere, among them the great Herbie Hancock, who composed the film’s Oscar-winning score, and saxophonist Wayne Shorter, who, in a beautiful little scene that a lesser director might have scrapped, describes his favorite moment in Powell and Pressburger’s The Red Shoes: the one where a dance impresario instructs a young composer to take the plagiarism of his work as a compliment—an exchange of significance to any jazz composer. The casting of so many musical legends, along with sets assembled with loving attention to acoustics (musicians working on the film noted that the constructed clubs actually sounded better than any real club they’d ever played in), leads us to Tavernier’s other masterstroke: every musical performance in the film was recorded live, no small feat on a production this size. In this sense, ’Round Midnight is as valuable as documentary as it is as a work of fiction. For all the noirish lighting, saturated autumn hues, and handsome widescreen compositions, the most important element in the film is its music—those interpretations of numbers old and new, captured with such tenderness. Whatever you do or don’t know about jazz doesn’t matter; the music of ’Round Midnight exists in a carefully curated bubble, evocative of a time long past yet performed in a manner that’s fully present, and ephemeral as smoke.

José Teodoro is a critic, essayist, and playwright.