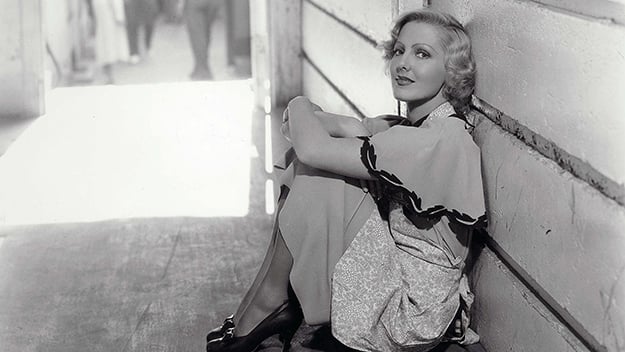 Listen to a special episode of The Film Comment Podcast: At Home featuring Sheila O’Malley on Jean Arthur and more.

When you talk about Jean Arthur, you have to talk about her voice. But how to describe it? Whatever adjective you choose needs to be accompanied by its opposite: her voice is one of paradoxes and duality. To quote Frank Capra, who cast her three times (Mr. Deeds Goes to Town, You Can’t Take it With You, and Mr. Smith Goes to Washington): “And that voice! Low, husky—at times it broke pleasingly into the higher octaves like a thousand tinkling bells.” Her IMDB page refers to it as “frog-like,” which won’t do at all. Edward G. Robinson, who acted with her in John Ford’s The Whole Town’s Talking, may have put it best in his memoir: Jean Arthur had “a voice that grated like fresh peppermint.”

Such a distinct voice had its drawbacks at first. Arthur, born in 1900, got her start in silent films. When sound came in, everything changed. Rowland V. Lee, who directed her in The Mysterious Dr. Fu Manchu (1929), observed later: “With the advent of sound no one on the lot would cast her.” Arthur heard her own voice for the first time in playback, and cried out, horrified, “A foghorn!” That “foghorn,” though, the foghorn so many people initially had reservations about, would become one of her distinguishing characteristics. Adolph Zukor, one of the founders of Paramount Pictures, where Jean Arthur was first under contract, said: “It was that foghorn quality which made her a greater star than she might have become on the silent screen.”

It wasn’t just her voice. It was how flexible she was within her voice’s “husky/tinkling bells/foghorn/fresh peppermint” so-called limitations. She could ratchet it up into the stratosphere when she was anxious (and Arthur anxious was always very funny). But she could also let the bottom drop out of her voice, allowing in a yearning softness. A whole other world opens up when Jean Arthur goes tender. People take classes for years to “free” their natural voice. Arthur’s was always freed. In a series of roles in the 1930s, Arthur became the epitome of the regular working girl (the secretary, assistant, clerk) who makes her own money, and knows how to take care of herself. She’s the kind of good-humored woman a man can be good pals with. She’s not a tomboy or a floozy. She gives as good as she gets (and what she gives is better). She holds her own in a room full of men. Arthur played ingenues in silents, but by the time she hit her stride in the 30s, she herself was in her 30s. She wasn’t a girl or a young woman, she was an adult. This makes a world of difference. Similar to her two-time co-star Cary Grant (Only Angels Have Wings, Talk of the Town), it is difficult to imagine Jean Arthur’s characters satisfied in a cozy domestic setting. She wants the man, but not the picket fence. Except for Shane, her final film, she didn’t play mothers. She rarely played a wife. The couple of times she did, marriage came with sideways eccentricities. In The Ex-Mrs. Bradford, with William Powell, she plays one of those glorious screwball ex-wives, humorous and glamorous and unflappable. In Too Many Husbands (1940), she finds herself an accidental polygamist, and instead of rushing to rectify the situation, she instead revels in the attention, pitting one husband (Fred MacMurray) against the other (Melvyn Douglas). While Arthur was always “fully grown” onscreen, her voice had the timbre of an excited kid, jumping up and down as the train rolls into town. The voice gives her a touching vulnerability, huge cracks in the armor. She had sentiment, but she was never—ever—sentimental.

Time and time again in Arthur’s films, her voice plays a huge part. There’s the opening of Easy Living (1937). While seated on the top deck of a moving bus, a fur coat falls on her head from the sky. She grabs it, stares at it for a second, and exclaims, gleeful and wondrous, “Gollleeee!” It’s a screwball voice appropriate to a screwball world. If a fur coat can descend from the sky, what else can happen? A lot, as it turns out. There’s the opening scene of Mr. Smith Goes to Washington (1939), where she talks with her journalist pal Diz (Thomas Mitchell) in the Senator’s office where she works. Arthur’s tired flat-lined voice tells the whole story of her disillusioned character. The corruption and cynicism of Washington has broken her spirit so much her voice can barely be bothered to get out of bed. Over the course of the film, her voice changes by increments, slowly loosening up until finally, there she is in the gallery of the Senate during Mr. Smith’s filibuster, and her squeals and gasps and raucous cheers show the total transformation. There’s the famous scene in the bar when, wasted, she proposes to Thomas Mitchell. Playing out in one take, Arthur sloshes around in her drunkenness, her voice lilting even more than usual, displaying sadness, anger, frustration, before she draws herself up, drunkenly indignant, “Sayyyyy, who started all this?” This scene may very well be Jean Arthur’s finest hour. Howard Hawks said it was “one of the best love scenes that I’ve ever seen in a picture”. Capra was so impressed he said, “I defy any other actress to play that scene.”

Two of her best films—Only Angels Have Wings and The More the Merrier (for which she received her only Oscar nomination)—end with a Jean Arthur “voice moment”, each so unique to her and so strange, really, it’s impossible to imagine another actress making similar choices. In Only Angels Have Wings, Cary Grant, dashing out the door, tosses a coin at her. When she sees the coin has two heads, she understands what has happened, and she exclaims, “HEYYYYY!!”, in a whining ear-splitting bellow, which grows in power as the realization sinks in. In that “HEYYYY” is Arthur’s boldness as an actress, her fearlessness in making big choices. Acting teacher Stella Adler used to say, “The talent is in the choice.” It’s a difficult thought, but a true one. Arthur’s talent was in the choice to look at the coin and start to scream in a brakes-squealing crescendo of exhilaration: “HEYYYYYYY”. Famously introverted, Arthur said in one of her rare interviews, “The only times I’m self-conscious is when I’m Jean Arthur. In front of a camera I lose my identity completely, and with it I lose my timidity.” 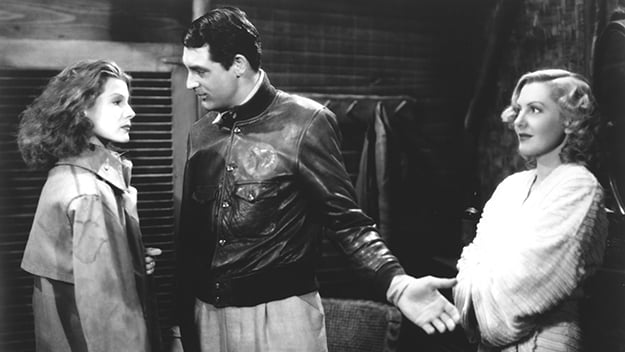 The final moment of The More the Merrier is a horse of an entirely different color. Her heartbroken character, believing she is alone in her apartment, wanders around moaning and whimpering and talking to herself. Slowly, with a dawning sense of horror and confusion, she realizes her bedroom wall has been knocked down. Her apartment is now open to the apartment next door, where Joe Carter (Joel McCrea), the man she loves, stands, staring at her. 5,000 things happen on Jean Arthur’s face at the same time: she is mortified at being “caught out” in what she thought was a private moment, she is madly in love with him, but she also doesn’t understand what has happened to the apartment wall. In this emotional maelstrom, her face a mask of panic, quavery panicked sounds burble around in her throat, growing in power until finally her voice widens out into a long loud wail. She’s crying, laughing, in love, and frightened. Simultaneously. Who could even pull off that mixture of emotions? Who would even choose to play the moment like that? Jean Arthur, that’s who.

Years later, long after Arthur’s time in Hollywood ended, she was rehearsing a production of George Bernard Shaw’s Saint Joan. She had initiated the project, Joan of Arc being one of her dream roles (when Arthur, christened Gladys Georgianna Greene, chose her stage name, she picked “Jean” in tribute to Jeanne d’Arc). Group Theatre alum Harold Clurman was brought in to direct. While it is true that Arthur had a lengthy history of unreliability, walking off projects, leaving shows mid-way through their runs, this was a troubled rehearsal process for an entirely different reason. Arthur saw Joan the way Shaw saw Joan: she may have been a warrior and a martyr, but she was also a hearty and frank peasant girl. That was how Arthur planned on playing it. Clurman wanted something more elevated. One cast member joked that Clurman tried to turn Arthur into Ingrid Bergman. Bringing us back to square one: Clurman had issues with her voice. That quavery squeaking funny adorable voice – which had brought her the love of millions, something Clurman would have done well to recognize – was not, in his opinion, the voice of a Saint. He spent rehearsals hammering away at her line readings, making her say things in a different way, rattling her.

Like Arthur those many years ago, Clurman heard a foghorn.

If by “foghorn” you mean: flexible, complicated, unfettered, fluid, responsive, free … then okay. Foghorn it is.