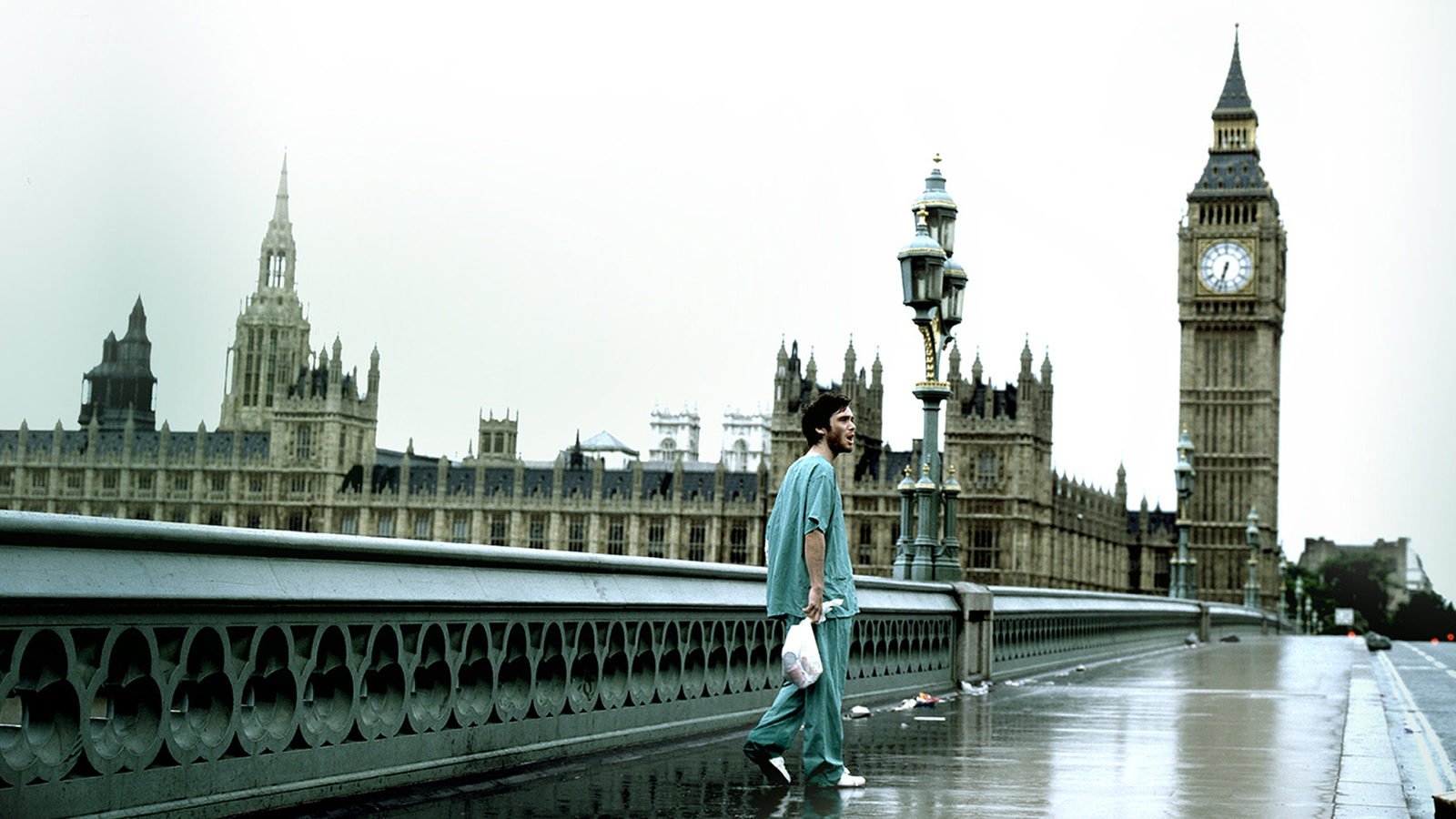 By Cecilia Sayad in the March-April 2003 Issue

Science fiction and horror films are frequently interpreted as allegories of specific realities, their fantastic and supernatural elements seen as symptoms of social and political malaise. The paranoia generated by loved ones taken over by a co-opting entity or ideology recurs within the most diverse of contexts, from Don Siegel's Invasion of the Body Snatchers (56) (evoking cold-war anxieties about Communism) to George Romero's Dawn of the Dead (78) (contagious zombie-ness as the destruction of individuality by consumerism). The examples are as legion as the ranks of the undead. Danny Boyle's 28 Days Later is set in a postapocalyptic Britain devastated by an epidemic that within seconds of infection transforms its victims into crazed cannibal killers. No aliens, no zombies—here, as Boyle asserts in the movie's press kit, people are victims of a virus that stirs within them something that is part of their nature: anger. The movie starts with the usual sci-fi tropes: mankind’s experiments go haywire with destructive results. The epidemic begins with chimps infected with “rage” (as part of research into what we presume is a cure for violent impulses) liberated by animal rights activists. The film then cuts to a young man named Jim (Cillian Murphy) waking up from a 28-day coma following a car accident. Finding the hospital abandoned, he walks out and wanders through the empty London streets. With few exceptions, those who haven’t fled the country after the outbreak are either dead or have become “the infected.” And it is with these survivors—Selena (Naomi Harris), widowed Frank (Brendan Gleeson), and his teenage daughter Hannah (Megan Burns)—that Jim will struggle to stay alive. The group sleeps amidst debris in deserted buildings, eats canned food gleaned from an abandoned supermarket, fights off the Infected, and worries about having to kill one another in the event that one of them becomes contaminated.

28 Days Later aligns itself with the typical loss-of-individuality plot—once an individual is infected, their humanity gives way to the monstrous. In that sense, the film is just one more in a genre that includes Night of the Living Dead, The Thing, Virus—which is not to deny Boyle’s unquestionable talent. Nevertheless, the film’s real interest lies in its relationship to contemporary events—or how its plot can fit different political backdrops—and it is tempting to read it in terms of the world’s current state of affairs. After all, the rage virus seems as uncontrollable as a biological/chemical attack or a suicide bombing. Not to mention the current SARS epidemic. In fact the movie began shooting on September 1, 2001. Hence it anticipates, and is contemporaneous with, 9/11. It is hard not to think of the TV images of Ground Zero or of Baghdad devastated by war when watching 28 Days Later‘s scenes of destruction, all shot on DV. One of Boyle’s accomplishments is his mingling of naturalistic technique—stressed by fluid digital camera movement—with highly surreal imagery in which red-eyed creatures attempt to devour the uninfected. Even though the script was written before 9/11, the analogy between what Boyle calls the “social rage” portrayed in the film and present day social unrest is inevitable—and that certainly adds interest to the movie. Nonetheless, people’s unpredictable reactions to different sorts of violence are a frequent preoccupation in Boyle’s films. In Trainspotting a group of youngsters causes the death of a baby because they are too stoned to hear her cry. The Beach‘s pseudo-hippie community abandon one of their number to die in agony in the woods after he’s bitten by a shark, so that his moans do not disturb their peaceful existence. In 28 Days Later the film’s characters seek protection with a group of British Army survivors but face abuse and violence at their hands.

Finally, whereas 28 Days Later revisits consolidated sci-fi/horror narrative patterns, its political undercurrents and resemblance to the current world order make one wonder whether history will ever stop repeating itself. The possibility of renewal suggested by the survivors’ attempts to start over certainly points toward hope. However, the circularity of the movie’s plot is most likely to inspire dismay. After all, if according to the old saying, “order is born from chaos,” it must also be true that chaos is born from order. By Film Comment
Underwater moonlight: French cinematographer Louvart talks about her remarkable lens-work on the new coming-of-age drama Murina
Subscribe to the Magazine