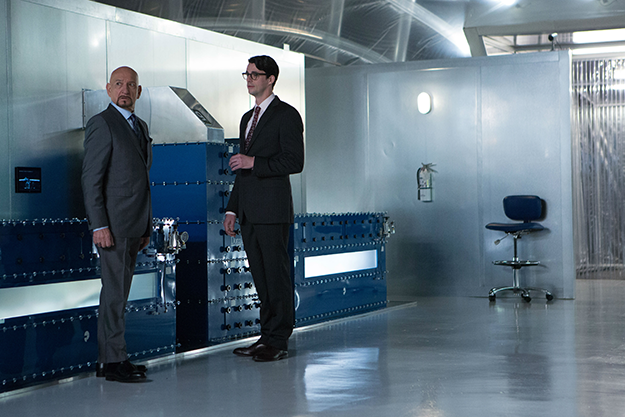 In spite of its implausible premise and Grand Canyon-sized plot holes, John Frankenheimer’s 1966 sci-fi horror classic Seconds is one of the most insightful American films ever made about the 1960s. That’s an unusual thing to say about a film whose main character, Arthur Hamilton (John Randolph), is re-living the nightmares of the Fifties: the successful but unrewarding career, the loveless suburban marriage, the endless, anonymous schlep from train to train. But the way Hamilton goes about escaping these nightmares could only have been imagined in the decade of LSD and JFK. Hamilton pays an organization called “The Company” to fake his death, reshape his flabby body (Rock Hudson plays Hamilton 2.0 aka Antiochus Wilson), and set him up with a glamorous new life as an artist in Malibu, complete with drinking buddies, wine-soaked orgies, and an endless supply of fresh paintings. A terrifyingly giggly Company executive gives Hudson some advice that might as well be the Flower Child’s motto, or epitaph: “You are alone in the world, absolved of all responsibility, except to your own interest. Isn’t that marvelous?” From the moment we hear this, we know the new life won’t last.

With Self/less, the cult director Tarsem Singh has made a loose remake of Seconds and, like Frankenheimer’s film, a remarkable depiction of an unstable generation’s hidden desires. In this go-around, Ryan Reynolds takes Rock Hudson’s part, while John Randolph’s role belongs to Ben Kingsley, who’s previously played Irish, Indian, Maori, Jewish, and Cockney, though here his over-the-top New York accent more likely represents an Englishman’s distorted perception of how Yankees sound than a wry comment on the artificiality of identity. The screenplay by Àlex and David Pastor shifts the original film’s focus from the post-WWII middle class to the one percent: Kingsley’s character, Damian Hale, is a real-estate mogul (“the man who built New York”) who’s dying of cancer—and failing to reconnect with his estranged daughter—when he learns about a controversial new mind-transplanting technology called shedding. Damian’s success is real, but its rewards are ephemeral; when he’s asked what his legacy is, he draws a blank, even though he’s literally standing in it. His motive for switching bodies isn’t so much the fear of death as it is the panicked delusion that he’s leaving nothing of real value behind; that his career amounts to a column of weightless ones and zeroes, not a city of brick and steel. In the middle of a Google session, he coughs up blood onto his laptop screen (the most striking image in a film that’s full of them). While this isn’t an especially subtle metaphor—his body is rejecting the digitized world—it does establish a conflict between infirm flesh and slick technology, and aligns Self/less with the diseases of an entire culture, not just a particular character. Sympathy for the devil? Maybe so, but after all, Tarsem—as he’s known professionally—has made a career out of crafting fearless exploratory portraits of people whom society refuses to understand. The Cell, his 2000 debut, took Jennifer Lopez inside the mind of a serial killer, and even Mirror Mirror, the Snow White comedy Tarsem made in 2012 (right around the time the phrase “director for hire” started popping up in reviews of his work), treats the evil queen, played by Julia Roberts, as “insecure” and misunderstood. It’s ironic that he’s gained a reputation for drowning his characters in punk-surreal imagery—literally so in The Cell, which features a memorable, Damien Hirst-inspired shot of the serial killer’s victim floating in a tank of water. There’s an echo of this moment in Self/less when Damian, his name no coincidence, sees his potential replacement kicking around in a refrigerated glass box (Perhaps the director is suggesting the way he views himself—when he pokes at his creations, they push back.) While the criticism that Tarsem values style over substance writes itself, right down to his training as a director of music videos (which include the hugely influential short he shot for R.E.M.’s “Losing My Religion”), style is often explicitly less important than his characters’ desires and feelings—indeed, it’s often the enemy. Take, for instance, the end of The Fall (06), in which the crippled silent-movie stunt man Roy competes with Alexandria, a young girl, for control of the fantastical story they’re co-narrating. (The story of how Tarsem convinced the actress playing Alexandria that her co-star was actually unable to walk is almost worthy of its own film.) Alexandria eventually wins out, ensuring that the story’s villain loses and two of its heroes survive; Roy, meanwhile, suffers the humiliation of seeing the stunt work for which he risked his life edited out of his movie. For all the stunning compositions and rapid-fire edits in Self/less, it’s Tarsem’s unwillingness to allow his characters to succumb to Roy’s fate—that is, to be swallowed up in the film’s visual effects—that keeps things interesting long after they should be.

Tarsem is at his best during the end of the film’s first act, in which “shedding” scientist Dr. Albright (Matthew Goode) gives Damian the body of Ryan Reynolds, takes him to a stunning Creole townhouse in New Orleans, and tells him he’s free to do whatever he wishes. The ensuing montage of one-night-stands, club-hopping, basketball, speedboats, and other youthful treats is stupid, voyeuristic, but above all, fun, making liberal use of Nola jazz and architecture. Where Seconds dismisses hedonism and steers Hamilton/Wilson toward a depressing, even nihilistic conclusion—that happiness is basically unreachable, and there’s no point in even aspiring to achieve it—Self/less can’t imagine that anyone wouldn’t enjoy all that drinking and dancing. Damian, rechristened Edward, begins experiencing memories that appear to have belonged to his buff body’s original owner. It’s these disturbing visions, not existential dissatisfaction with his new life, that trigger his flight from New Orleans. At this point Self/less becomes a different kind of movie, shifting to plotlines carefully omitted from the trailer. Edward traces a backdrop in his recurring visions to Missouri, where he meets a woman who believes him to be her husband. Her reaction confirms that his new body was stolen from a real person, not grown in a lab. (Seconds implies a similar possibility but prefers to leave it unexplored.) He also learns that his body’s previous owner was a Marine, whose skills with a gun, car, and pair of fists he can still harness whenever the plot requires him to do so. After a while, the film grows suspiciously reminiscent of David Fincher’s The Game (97), another Frankenheimer descendant, except that Fincher’s work thrives on the ironic blurring of reality and artifice while Tarsem seems to require that we sit back and pretend to be surprised as Damian’s adventures melt his cold heart.

It’s easy to dismiss the latter half of Self/less as Jason Bourne lite, what with its amnesia-driven storyline and claustrophobic fights. Yet the questions that Tarsem keeps posing in between obligatory action sequences are at least as interesting and thought-provoking as anything else in this film, The Game, or Seconds. Damian, on the run from Dr. Albright with his “wife” and “daughter,” turns to his old business partner, Martin, played by a surprisingly touching Victor Garber, for help. When Martin confesses that he’s used shedding technology to save his son’s life, Damian informs him that Dr. Albright uses real people as replacement bodies and that enlisting his services necessarily entails killing another human being. Martin looks shocked, despairing, but, crucially, not all that surprised—it’s as if he knew, deep down, exactly what he was doing when he paid for shedding technology. It’s not much of a leap to imagine that Damian sensed exactly the same thing (as we did), or that a career of indirectly ruining people’s lives through mergers and acquisitions has trained him to repress his guilt. For all the car crashes and gunshots, the biggest crimes in Self/less are committed from a safe distance and protected by total deniability—in short, they’re the kinds of crimes at which the rich and powerful often excel. That Tarsem keeps circling around this theme without ever really interrogating the source of its characters’ power and privilege isn’t exactly a surprise, but it is a disappointment. Damian has his Scrooge-esque epiphany and atones for his crimes, but he gives no indication that he understands what his crimes are, aside from some shoddy parenting. It’s strange, considering the movie’s title, that we’re spared the sight of his final, selfless act—Tarsem may have sensed that the transformation from sinner to saint wouldn’t be remotely convincing, since his hero doesn’t really confess to anything. Even before this, Damian entrusts his money to the wife and daughter of the man whose body he’s taken. This supposed generosity looks uncannily like the bid for his daughter’s love that he makes at the beginning of the film; in fact, it’s another kind of “transplant,” whereby an essential element of his self—his filthy lucre—survives by passing into a younger, more energetic host.

But none of this registers as the film reaches an ending. When the remaining survivors of all those fights and chases tearfully reunite, the camera shows them as dots on the surface of a gorgeous tropical island—I felt like I was watching dolls being maneuvered through a gaudy toy house. Perhaps in the end Tarsem is a little too kind to his characters: instead of letting them be themselves, uncertain but free, he crushes them, and the ideas they represent, under something even heavier than gratuitous style—a gratuitous happy ending.