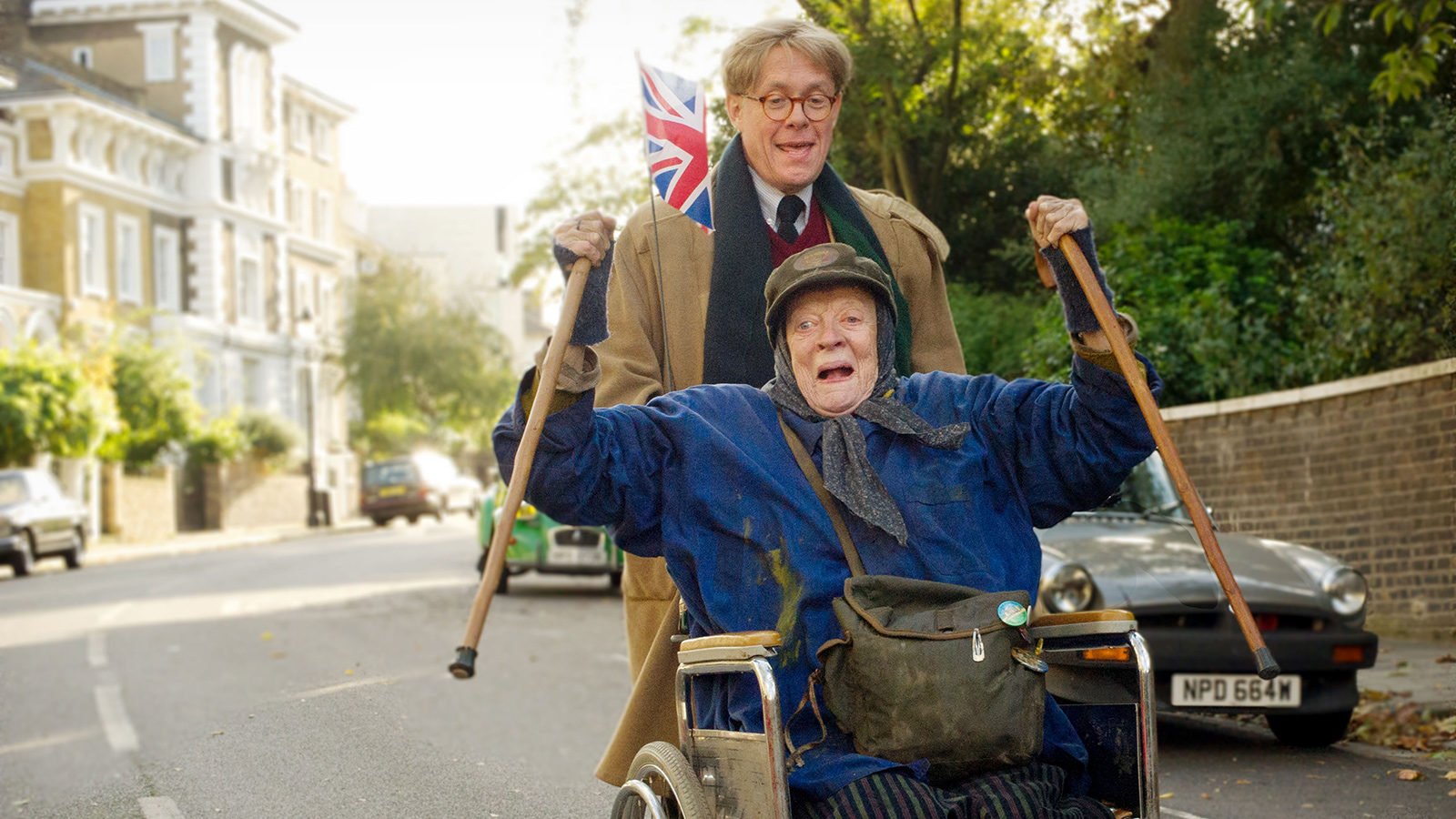 Review: The Lady in the Van

By Graham Fuller in the November-December 2015 Issue

The Lady in the Van is the third film Nicholas Hytner has made from an Alan Bennett screenplay having first directed Bennett’s stage version. Unlike The Madness of King George (94) and The History Boys (06), its ostensible focus is a woman—the emotionally troubled, unwashed indigent with delusions of grandeur who, sleeping initially in her Bedford Van, took root in the driveway of Bennett’s house in a middle-class part of Camden in 1974 and stayed for 15 years. Bennett had invited her there partly out of kindness, partly to stop the commotions that resulted whenever she was told to move her vehicle. Their oddly formal friendship inspired him to write a memoir, first published in The London Review of Books and subsequently in book form, and then adapted as a play and then a radio drama.

Maggie Smith originated this world-class eccentric on stage, played her on the air, and is the movie’s star. She makes Miss Shepherd as imperious as her fellow reactionary Margaret Thatcher, whose performance as prime minister Shepherd believed she could have bettered, and as withering as Downton Abbey’s Dowager Countess of Grantham. Bennett has no peer in caustically but compassionately unmasking repressed middle-aged and elderly Englishwomen, as demonstrated by some of the episodes of his BBC-TV Talking Heads monologue series (87/98), the most lauded of which showcases Smith’s brilliance as a vicar’s subdued, sherry-tippling wife.

Though The Lady in the Van is a detective story that gradually reveals why Miss Shepherd hates music, speaks French fluently, knows London’s streets as well as any cabbie, and cannot maintain a fixed abode, its more involving character is Bennett. Alex Jennings stringently impersonates him as not one but two pithy Northerners—like Nicolas Cage’s screenwriting Kaufman twins in Adaptation. Here, one Bennett writes and the other Bennett lives, even if the latter doesn’t exert himself much more than his languid literary counterpart, whom he faintly disdains. The bifurcated Bennett suggests an uncomfortably codependent couple or another pair of twins who get on each other’s nerves, and this codependency further emphasizes the whole man’s loneliness. The Lady in the Van

The “only connect” imperative in Bennett’s helping Miss Shepherd is complicated by the notion that, in coming to live a few feet from his house, she was the one bestowing the favor, as she would’ve no doubt affirmed. He gets on well enough with his neighbors (variously guilty liberals, snobs, hypocrites, and naïfs) but the strained intimacy of his relationship with Miss Shepherd is a more effective salve for his romantic isolation, typified by the brusque “Nah” he gets when he asks one of the male prostitutes who visits him to stick around for a cup of tea.

Though Miss Shepherd is needy in practical matters, she’s emotionally self-contained, having good reasons for preserving her distance from Bennett. This makes her a more tolerable mother figure than his increasingly infirm real mother. “Mam” (Gwen Taylor) repels him with her smothering affection and desire to live with him, which, presumably, triggers his repressed Oedipal anxieties. Miss Shepherd may fail to cover her urine odor with lavender water, but as an asexual presence (a two-time nun, in fact) she doesn’t threaten to disturb Bennett’s equilibrium. Her impact on him is still dampening: only after she has ceased to live on his property is he able to unify his two halves and fulfill himself as a mature man.

By his own admission, Hytner is not a film stylist who can “think with a camera,” but he handles Bennett’s tales with crisp economy. He even allows himself a “meta” moment here. At the end, the real Alan Bennett cycles to the house in the movie (where he actually lived and Miss Shepherd parked) to watch Jennings’s Bennett talk to a TV crew about the departed lady. Happily, these two Bennetts have no need to make peace with each other.