By Andrew Chan in the November-December 2009 Issue

As if responding to the millennial rash of “death of cinema” prognostications, Pedro Almodóvar has spent the better part of two decades as a brand-name auteur soothing the cinephilic soul, reassuring us of the validity and profundity of that peculiar emotion known as movie love. That’s part of the reason both aesthetes and mainstream audiences adore him: like Tarantino, his unmistakable style exists at the vanishing point where cinephilia and nostalgia have irrevocably merged. While his work first gained notoriety in Spain as a prime manifestation of post-Franco social liberation, his string of stateside hits since All About My Mother (99) has come to embody film as a realm of luxury and comfort rather than provocation. In the often dreary world of contemporary art cinema, Almodóvar even at his most serious is that rare great escapist. A Warholian lover of pastiche, he lets us have our cake and eat it too by serving up classic melodrama and soap opera-influenced pleasures, then queering and complicating them in ways that assert his artistic intelligence.

Continuing his career-long view of the world through the kaleidoscope of film history, Broken Embraces revolves around a pair of archival fetish objects. The first artifact, a lost labor of love by director Mateo Blanco (Lluís Homar) that strongly resembles Almodóvar’s 1988 breakthrough Women on the Verge of a Nervous Breakdown, serves as the connecting thread linking a typically colorful cast of characters. Their melodramatic-screwball troubles begin when Mateo and his leading lady (Penélope Cruz) fall into a secret love affair. Her aging tycoon boyfriend enlists his mop-topped, zit-faced gay son to spy on them, and the grainy video footage he gathers serves as a chronicle of both the film in production and the noir intrigue that arises in the midst of it. Flash forward ten years to the film’s present tense, when sudden blindness has put an end to Mateo’s career as a director. Casual womanizing and screenwriting seem to keep his memories of loss at bay, but soon he is forced to confront the truth about what led his last movie and romance to disaster.

These narrative somersaults are par for the course in the world of Almodóvar, but this time around—as a number of negative reviews have already pointed out—the writer in him has won out over the celebrated visual stylist. Compelled to tie up every last loose end in his convoluted plot, Almodóvar commits the crime of telling rather than showing. Though Embraces finds him collaborating for the first time with the gifted cinematographer Rodrigo Prieto, the candy-colored palette and meticulously composed widescreen compositions have become the most clichéd instruments in his tool box. Penélope Cruz—a funny-faced beauty whose thin nose and closely set features allow her to slide into comedy at a moment’s notice—is the only presence that holds our undivided attention. But where her performance in Volver (06) gave Almodóvar’s oeuvre some of its most exuberant and deeply felt material, here she is a carelessly sketched tragic figure repeatedly presented to us with tear-stained cheeks and a bruised body, to diminishing emotional effect.

Though the film offers nothing new for the eyes, its wordiness ultimately acts as a complement rather than a drawback to Almodóvar’s masterful storytelling. Whether Mateo is treating us to a drawn-out verbal tangent in which he conjures up ideas for his next script, or another character is spilling the beans about past sins, we experience the film as an overflow of narrative delivered in some of its most sensational forms: secrets, gossip, confessions, wildly unpredictable conversation. If second-rate Almodóvar still manages to feel like salve for the movie lover’s spirit, it’s because his films are built not on surprises or flashes of originality but on a deftly constructed illusion of inexhaustibility, an unthreatening plenitude into which the viewer is invited to sink. In his cinema, even the darkest hearts, the deepest tragedies, and the most frivolous art become reasons to live—for if life is a story, then curiosity alone justifies our seeing it through to the end. 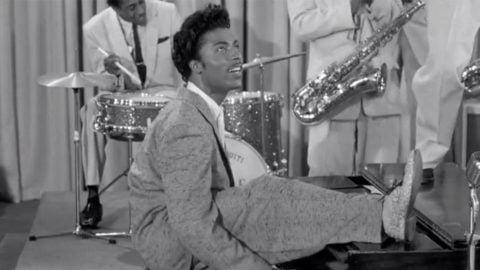