By Eric Hynes in the November-December 2015 Issue

For all of their scope, depth, and complexity, Frederick Wiseman’s films often unfold with the elegant simplicity of Morse code. Short establishing shots; long scene; brief interstitial sequence; really long scene; short exterior shot; really, really, really long scene. And onward to the end, the films proceed at this irregularly regular tempo, holding our attention and communicating meaning through the music of modulation and duration. It’s true of his institutionally focused films from Welfare (75) to At Berkeley (13), as well as of his films of place, including the current In Jackson Heights, a portrait of the Queens, New York, neighborhood that’s one of the most ethnically and culturally diverse in the world. Of course there’s more than Morse code at play, as these segments function like notes of varying tone and timbre, and these notes are also actually documentary recordings of people at work, play, and deliberation. But being that Wiseman is preoccupied not with individual characters, events, or points of view but with how many of these elements coalesce into systems and communities, it’s at the structural and narrative level that his artistry truly reveals itself.

Short or long, no note is wasted in a Wiseman film. A shot that might be purely transitional or rhythmic for another filmmaker often winds up having great intrinsic value in his hands. Snapshots of mom-and-pop storefronts in In Jackson Heights reveal both a variety of independent businesses as well as the local culture in which those businesses are allowed to thrive. Later on, when a community activist talks to merchants about the encroachment of chain stores, we’re able to recall, and fear for, the storefronts we’d glimpsed in these snapshots. The short scenes deepen the longer ones, and the longer ones send us back to the shorter ones. Over time, and in effect, Wiseman encourages us to populate and discern complexity in what we see, constructing a version of community through these images and sounds to emulate the one he’s observing.

Much is made of the length of Wiseman’s films—In Jackson Heights runs a typical 190 minutes—but as with painters who work with large canvases, the bigger size isn’t about excess but scale and scope. Expansion is used to describe, and stand in for, an even bigger expanse. Serving as his own editor, Wiseman eschews a standard three-act structure, with its main characters, its central conflict, complication, and climax, for one that thematically widens and deepens over time—less an arc than a spiral. When he revisits Queens city council member Daniel Dromm, it’s not to develop his story but to employ him as a recognizable conduit to more aspects of the community. Wiseman uses the local Jewish synagogue—which opens its doors to various clubs and societies, including a long-running LGBT group—in the same fashion, returning us to familiar ground that keeps expanding and transforming beneath us. Though he employs a similar narrative strategy from film to film, its effect varies depending on the subject. In two previous documentaries of place, Aspen (91) and Belfast, Maine (99), Wiseman circles communities in order to illustrate degrees of stratification. In Aspen, we visit a boozy, bikini-friendly party on a ski slope, then meet Latino laborers who struggle to find permanent housing in town; we enter a homeopathic hippie health spa, then a Christian church on a Sunday morning. There’s diversity on display but also tension in the contrast, a sense of wildly different values living within the same area code. In Belfast, Maine, it’s less about contrasting the haves with the have-nots, the left with the right, than showing a society straining to evolve and thrive while accommodating a rapidly declining, increasingly uncared-for elderly population. Over the course of three-plus hours, Wiseman circles back to a home health-care representative visiting various patients. She’s never the focus of the scene—it’s her patients that make an impression—but over time these visits accumulate into a virtual, emotionally powerful chorus of need.

Yet when Wiseman cycles through the streets and storefronts of Jackson Heights, through its mosques and schools and apartments, he finds less disparity than blending, overlapping. A woman on the way to visit a dying parent runs into a neighborhood Christian clean-up crew, and they pray together. A bustling thoroughfare by day becomes a site for food handouts to the homeless by night. A laundromat that might engender a sense of loneliness or connote low income (as a laundromat does in Belfast, Maine) here becomes a setting first for a site-specific musical performance and then for boisterous World Cup watchers from Colombia, Brazil, and a host of other countries. Life, culture, complexity—it all overwhelms these spaces, and overtakes any single notion of what they might signify. Which isn’t to say that class, racial, and religious conflict aren’t also present in the neighborhood, or that Wiseman doesn’t stir plenty of evidence of it into his melting pot. The difference is that he’s describing a community that actually thinks of itself as a community, and this self-definition manages to define each sequence, each of the filmmaker’s cyclic tours down its streets. Functionally, his whirlpooling strategy allows the character of these places to rise to the surface rather than force it into a narrative throughline. 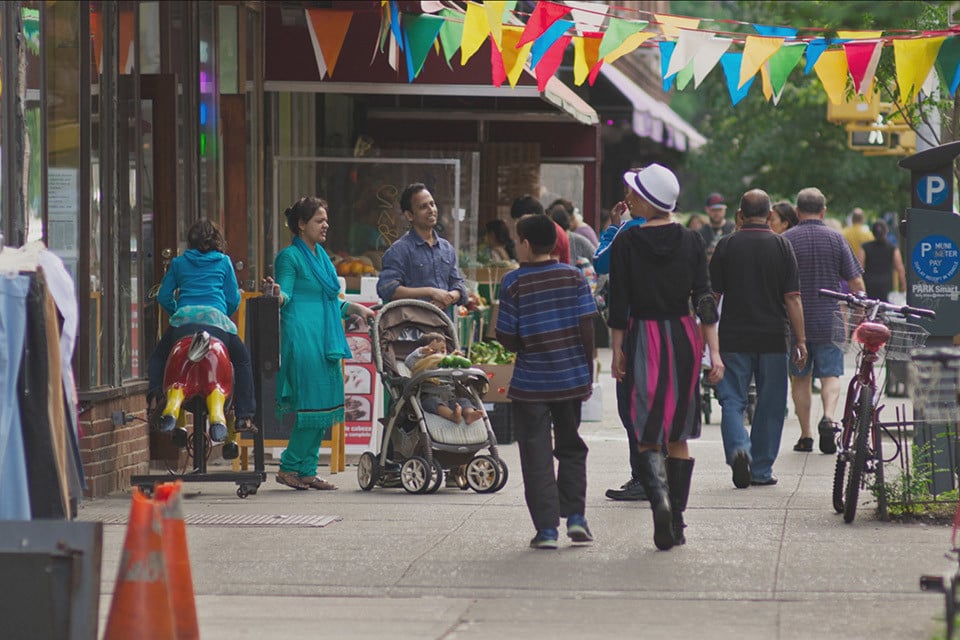 That ethic persists on a cellular level as well. Wiseman’s construction of individual scenes strives to preserve the spirit, and even the shape, of what he’s witnessed. If the scene is a mundane policy meeting, he makes its mundanity essential to its depiction. If a support group for recent immigrants is dominated by a powerful but rambling monologue on migration, that rambling monologue becomes central to Wiseman’s version of that meeting. On a formal level, these scenes and shots create immense tension for a viewer accustomed to an economy of time and action. Yet here, again, the form directly serves Wiseman’s greater purpose of establishing and deepening our notion of place. Once you realize that a cut isn’t necessarily in the offing, that you might have to sit through all the stammers and tangents of a non-professional speaker struggling to articulate herself to a group of attentive fellow citizens, you watch differently. You become one of those attentive fellow citizens—or you become aware, like perhaps others in that room, of the limits of your attention. By not shaping every bit of dialogue, every volley of conversation, into an easily identifiable point within the narrative, Wiseman makes being present in that moment, in that place, the point. And though subsequent shorter scenes and shots can feel like a relief after the high-wire act of these longer passages, the attentiveness that Wiseman has fostered can also carry over.

As the layers pile up, as we loop back to these painstakingly articulated places and faces and become immersed in this neighborhood, Wiseman’s authorial concerns become clearer. For as much as the director hangs back in these rooms, never allowing the presence of his crew to become conspicuous, his narrative choices inevitably speak of a mind and citizen at work. And with In Jackson Heights, he comes the closest he’s ever come to exulting in the community that he’s describing for us. Dangers lurk, from the plans proposed by the Queens Economic Development Corporation to gentrification to the shadow of intolerance that accompanies every influx of immigrants. But this time Wiseman’s documentary of place is less a window onto cultural, political, or historical concerns—relevant though these concerns are and remain in this film and all of his work—than an affirmation of the value of community itself, and this community especially. Whether we’re digging in, driving by, spending time with or merely glimpsing, going long or going short, there’s not a frame of In Jackson Heights that isn’t completely, fully, fascinatingly there. By Eric Hynes
Candid constructions: a consideration of documentarians who make films about their own lives
Subscribe to the Magazine