Few digital compilations have had as revelatory an effect on American film history as the six-disc box set Pioneers: First Women Filmmakers, curated by feminist film historian Shelley Stamp and produced and distributed by Kino Classics. Available on Blu-ray and DVD, it is also streaming on kinonow.com, and a small selection of the films are available on Netflix. The amazing box set includes films by 20 female directors, many of whom also wrote, produced, and starred in their own features, series, and shorts. Alice Guy-Blaché, whose directing career began in 1896 and whose technological innovations in sound rivaled Edison’s, and Lois Weber, whose heroines have a self-reliance that makes Griffith’s Victorian damsels all the more ridiculous, receive one disc apiece. And the range of female directors and the genres they tackled make the other four discs even more astounding. There’s the wildly adventurous filmmaker and actor Nell Shipman; the expert comedian Mabel Normand directing herself and Charlie Chaplin; Zora Neale Hurston’s intimate studies of African-American children playing games and dancing; Marion E. Wong’s The Curse of Quon Gwon, the first film with an all Chinese-American cast; and much more.

Now Kino Classics has issued three additional discs in the Pioneers series. Two of them, devoted to Guy-Blaché’s work under the Gaumont and Solax banners, establish her not simply as a pioneer, but as a first-rate filmmaker who put women at the center of her work and treated gender as a source of both comedy and drama. Guy-Blaché went to work as a secretary for the company that would be taken over by Leon Gaumont in 1895, and was soon managing and creating films there. “Movie director” as a job description did not yet exist; Guy-Blaché’s role at Gaumont was more akin to that of a TV series “showrunner.” Or as Kim Tomadjoglou explains in an excellent essay on the discs, she was literally a “metteur en scène.” 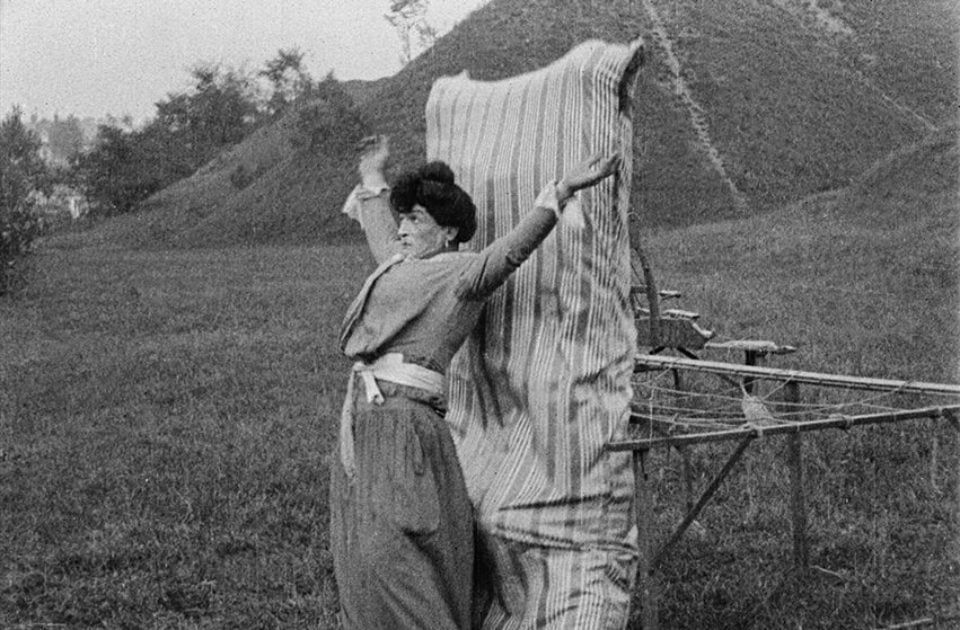 Guy-Blaché was the significant creative force on all the Gaumont Years films, restored here in 2K and 4K. (Do not overlook The Drunken Mattress, a piece of feminist surrealism avant la lettre.) In 1907, Alice Guy married Herbert Blaché and the couple traveled to the U.S., first to market Gaumont’s talking-picture Chronophone, and then to found the Solax Studio. The films on The Solax Years date from 1911 through 1914, and show Guy-Blaché’s filmmaking skill and inventiveness in full flower. In both comedies and dramas, her focus is on women, immigrants, and workers. (Her feminism is more progressive than her class politics.) A Comedy of Errors is a perfectly timed bedroom farce in miniature, here enhanced by A.J. Layague’s raunchy jazz score. Cousins of Sherlocko is a delirious cross-dressing farce, and the fairy-tale adaptation Dick Whittington and His Cat is a delight for adults as well as children.

I wish I could be as enthusiastic about The Intrigue: The Films of Julia Crawford Ivers, which includes two features written by Ivers and one feature and a fragment of another that she both wrote and directed. The title is taken from The Intrigue, a World War I sci-fi drama written by Ivers and directed by Frank Lloyd. Nothing remarkable here, but a necessity for film completists.