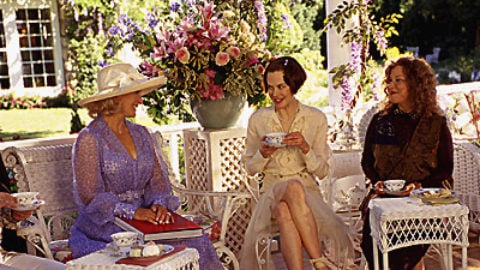 Our Bodies, Our Selves: The Stepford Wives

By Alissa Quart
Once upon a time, The Stepford Wives prompted uneasy laughter; the remake is just for laughs. Alissa Quart lets us in on the joke Review: She Hate Me FAHRENHEIT 9/11
By Kent Jones
Michael Moore’s unmissable polemic is devastating: devastating to watch, devastating to think about, and a devastating indictment of the fraudulent presidency of George W. Bush. It’s the Movie of the Moment—no, make that the year.
Plus: an interview with Michael Moore by Gavin Smith

THE STEPFORD WIVES
By Alissa Quart
The title of the original 1975 “women’s lib gothic” instantly entered the language as a synonym for vapid suburban conformism. Now, 30 years later, a comedy remake reveals that the more things change…

ROSS MCELWEE
By Godfrey Cheshire
In Bright Leaves, the latest installment of his ongoing cinematic autobiography, America’s foremost practitioner of the first-person documentary returns home again to try to come to terms with his southern heritage and its ties to the tobacco industry.

JACQUES TATI
By Richard Combs
M. Hulot, the ever-apologetic everyman at the center of the filmmaker’s comedies, is cinema’s Man Who Wasn’t There. What does the dynamic between this French icon and the women in his life reveal about his uniquely disconnected nature.

MAKING OFS
By Paul Arthur
The “behind-the-scenes” film brings together documentary and promotional impulses. Here’s the lowdown on a proliferating postmodern genre as old as cinema itself but only now coming into its own.

KILL BILL
By Chuck Stephens
You’ve read the rest—now read the best. Why Quentin Tarantino conceived and gave birth to his epic tribute to global grindhouse.

JUON
By Grady Hendrix
Forget Ring—Japanese horror has a new cult, and it’s (sort of) headed this way.

REVIEW
Red Lights by Amy Taubin, Los Angeles Plays Itself by Paul Arthur, The Terminal by Michael Koresky, and She Hate Me by Nathan Lee