Our Bodies, Our Selves: The Stepford Wives

By Alissa Quart in the July-August 2004 Issue

Even if you hadn't seen the film, you knew what a Stepford Wife was. I remember a woman refusing to go on the pill because she feared doing another stint as a “mindless, busty Stepford Wife.” I remember friends dubbing the exurbs “Stepford World,” briefly deluding themselves that their beloved city was still pre-mall. In 2003, there was the New York Times's “Stepford Spring” fashion supplement and a Maureen Dowd column headlined “The Stepford Wives: Now Showing at the Botox Salon Near You.”

While the Stepford Wife meme derives from a 1975 film based on Ira Levin's 1972 novel, within a year of the film's release the phrase had been taken up to describe a general phenomenon: it was the term for what middle-class women didn't want to end up as, but with a camp accent, ensuring that those using it wouldn't be mistaken for earnest.

It's no coincidence that some of the most hardy, migratory phrases in pop culture derive from social horror films like The Manchurian Candidate, Invasion of the Body Snatchers, and Village of the Damned. The best of these present the phenomenon of subjectivity's obsolescence in a way that is both unsettling and reassuring. In all of them, there's an “at least” clause. “At least” there is an external explanation for why we lose our individuality: we're brainwashed, supplanted by an alien life form—or, as in The Stepford Wives, literally turned into robots. These films' titles are particularly useful because they describe a feeling for which words don't exist—the feeling that we've been overtaken by larger forces or gutted as part of a social plan or readied for the network or (and here the inheritor of this meme's tradition becomes clear) the matrix.

The remake of The Stepford Wives doesn't aim for the chilling power of the originalI it's too invested in being liked for that. Tellingly uninterested in the first version's idée fixe of social control, and smirking at its paranoia, SW 2004 is a droll but toothless comedy and in so being has several advantages over its predecessor. A Paul Rudnick script is always a plus÷just for starters, in his version, supporting character Bobbie Markowitz (Bette Midler) is the author of family hate memoirs with titles like I Love You, But Please Die. Then there are the performances, which are fun and queer-eyed enough to be mildly subversive (a gay couple, whose oppressive “husband” is a Log Cabin Republican).

The film's heroine, Joanna Eberhart (Nicole Kidman), is a glacial TV network executive whose career has been destroyed by a string of exploitative reality shows gone bad and whose marriage has been whittled away by her burlesque workaholism. She and her husband, Walter (Matthew Broderick), move to Connecticut to start fresh. As the emasculated white-collar husband, Broderick here reads like a one-man musical comedy adaptation of Susan Faludi's Stiffed, the “problem” of the white man's befuddled place in the social firmament played for Broad(way) laughs.

Though it's hardly the giddy monster that was widely anticipated, this $90 million remake fails to go head-to-head with the original. Pace Pauline Kael, who dismissively dubbed it “the first women's lib Gothic,” the 1975 version is an achieved work of social satire and psychological horror. Written by screenwriting superstar William Goldman and directed by Bryan Forbes, it didn't exactly set the box office on fire. This Joanna, played by Katharine Ross in her post-doe, now fawn stage, hair hanging down in two pretty sheaves, is a photographer who moves from the Upper West Side to a suburban commuter town not because she has fallen from her perch as a postfeminist powerhouse but because she, Walter (Peter Masterson), and their kids are four pale birds riding the air currents of white flight: Stepford isn't a consolation prize after their big-ticket careers go south but part of a bum's rush from Abe Beameöera NYC with its falling property values, blackouts, crime, and, somewhere in the background, early-onset hysteria among intellectuals regarding the urban “underclass.”

Ross's Joanna isn't tough the way Kidman's update is. She has a thoughtful vulnerability, which one recognizes from Richard Yates's suburban novels as a sign of the authenticity of the unformed and well-bred. Paula Prentiss, playing the Midler role of Bobbie—Joanna's id—is a fantastic confection: raucous southern accent, a taste for midday Ring-Dings and scotch, and spouting a lazy sort of feminism-in-hot-pants. We are meant to fall in love with her immediately, and we do. When Prentiss is replaced by a grinning robot clad in an outfit so Daughters-of-the-American-Revolution that it might make Barbara Bush feel overdressed, we take her disappearance hard.

The original's ability to evoke a sense of loss, to spin camp into genuine regret, is especially remarkable given the material's ridiculous premise. Perhaps that's because it actually functions more as a metaphor for how we die a little bit when we choose lives of deference and diminishment. There's no good reason why the remake couldn't pull off a similar trick. We're still getting the same irreconcilable message—stay “true” to yourself but also conform to nationwide strictures of speech, ideology, clothing, behavior, body, and even architecture, if gated communities and McMansions are an index. The same dilemma—Motherhood or the workplace? Be a “stay at home” mom or a nanny-reliant worker bee?—continues to animate, especially the sort of middle-class women at risk of Stepfordization, those who have been hotly debating Caitlin Flanagan's recent articles about the nanny track.

There are differences, of course, between the suburban mores of 1975 and those of today, both on film and in life. The original Stepford was a pre-gourmet, pre-“lifestyle” consumer paradise where stacked automatons recited ad slogans for cleaning liquids and toilet tissue. There was no Blue Mountain java, no eco-friendly laundry detergent or Kiehl's body products. The 2004 version is filled with “good” lifestyle brands that define who the wives are before they become robots. After their transformations, Bobbie and gay friend Roger (Roger Bart) start practicing bad consumerism, which means bad taste: Country Living décor, Brooks Brothers, and Lily Pulitzer. (Note here another use of the Stepford meme—product placement is the film's ultimate Stepford wife. Is it any wonder that the retro halter dresses that costume designer Ann Roth puts on these robot women are “in” this summer in real life? Or that one fembot remarks admiringly of Walter's chinos, “No wonder they call it Banana Republic”?)

The characters themselves conform to brand identity. The 2004 Joanna goes from network exec to Stepford bobo-bot and then is returned to her real self, finding a new career, wouldn't you know it, back in television. But now she's the reporter who broke the Stepford Wives story and chats about it on Larry King (the coda seems borrowed from the 1980 TV-movie sequel, Revenge of the Stepford Wives, in which a female TV reporter investigates Stepford—and which, like the remake, was produced by Scott Rudin). The remake has disposed of Katharine Ross's fey shutterbug Mom dreaming of a small gallery show and a feminist consciousness-raising group—and replaced her with a woman for whom media overexposure and corporate leadership are self-realization. In fact, before their Stepfordization, none of the wives were members of NOW. They were corporate CEOs.

With its eager-to-please, media circus postmodern stylings, the new SW seems dated, firmly grounded in the early Nineties&dmash;call it “The Second Wives Club”: a sunny riff about geeky middle-aged guys and their freakishly hot and, of course, younger spouses. The film, perhaps rightly, has made a decision that women viewers won't be entertained by watching their social fears morph onscreen. By contrast, the original film, in its B-movie patois, did actually attempt to negotiate issues that still plague women. It was worthy of its meme, a paranoiac feminist potboiler. The original SW sedimented a new genre—the feminist uncanny—by reconfiguring the woman's weepie. The feminist uncanny is the weepie turned outside in. The women of both genres are haunted by the sterility of their own domesticity. In the weepie, though, they do get to cry about it. The 2004 version, a patched-together amusement, is obviously far more canny than it is uncanny. It glides by on the notion that there is little that is still frightening about being an American woman. I wish I could say it was a premise whose time had come. 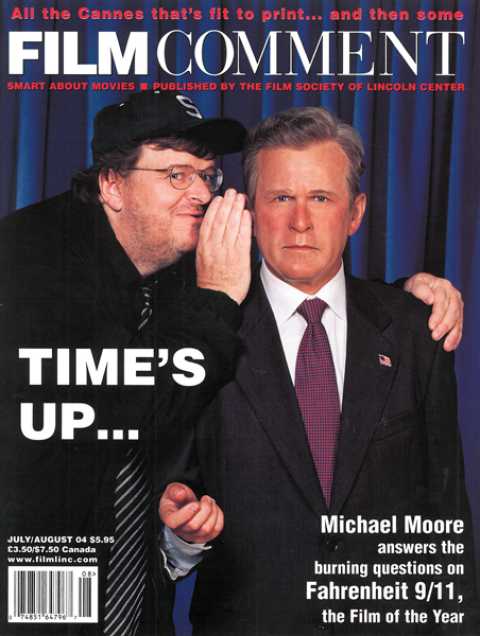 From the July-August 2004 Issue
Also in this issue
Review: She Hate Me By Nathan Lee
Continental Divide By Kent Jones
Subscribe to the magazine