Donn Alan (D.A.) Pennebaker, documentary filmmaking legend and co-pioneer of the direct cinema movement, died in August 2019 at age 94, having blessed posterity with chronicles of crucial fleeting moments in the performing arts, politics, and beyond—unflashy, minimally editorializing, but shrewdly planned and artfully assembled. Intending his camera to be “the least important thing in the room,” Pennebaker made films that have a thrilling immediacy, aided by brisk editing, often by frequent partner Chris Hegedus. Whether the subject is Chuck Berry or Jimmy Carter, George Stephanopoulos or Elaine Stritch, the films provide a sense of what it’s like to exist as that person at that time.

After serving in the Navy and going to MIT and Yale with an eye toward becoming an engineer (he founded the company that made the first computerized airline reservation system), Pennebaker went all-in on filmmaking after viewing a friend’s experimental a-day-in-New York short. It inspired his own Daybreak Express (1953), a rhythmically edited riff on the city set to Duke Ellington. Like colleagues and sometime collaborators Richard Leacock, Albert and David Maysles, and others, the Pennebaker we know formed when he worked for Drew Associates on groundbreaking documentaries like Primary (1960), which employed a freeing mobile camera and sound equipment that allowed for a synchronous soundtrack. Pennebaker would never stray too far from the tenets learned with Drew Associates, almost always preferring to remain effectively invisible.

From 1965 to 1966, Pennebaker made three films with Bob Dylan, the best-known and most readily available being Dont Look Back, one of the funniest rock docs ever made, with Dylan at his most caustically witty on a British tour. That movie’s black-and-white images and hotel-hermetic irony were jettisoned for Monterey Pop (1968), a record of the Monterey International Pop Festival of 1967 filmed with numerous cameras on glorious color 16mm. Breathing with the wide-open spaces of the Monterey County Fairgrounds in California, it’s shot through with beatific Summer of Love optimism and the invigorating creative input of some of rock history’s brightest lights. Monterey’s success would set the template for Woodstock and beyond, in addition to being a beautiful confluence of musical talent and tens of thousands of counterculture youths — “gentle people,” in the words of Scott McKenzie’s “San Francisco (Be Sure to Wear Flowers in Your Hair),” which opens the film and was written expressly for the fest. Shots of festivalgoers eating watermelon and corn-on-the-cob, musing about the good “vibes,” groggily inching out of tents in the morning and generally savoring the magic moment liberally pepper the film, nicely breaking up the performances. The eight credited cameramen were clearly drawn to the pretty girls, whose faces dot the film (a tendency shared with Pennebaker’s 1973 David Bowie concert film Ziggy Stardust and the Spiders from Mars). Giving some flavor of the administrative side of the undertaking, a security officer is seen worrying aloud about “the hippies—I mean Hell’s Angels—coming down, and the Black Panthers,” and having to feed 50,000 people with the city’s limited supply.

Pennebaker, with editor Nina Schulman, asserts a specific vision of the event through bold editorial choices: reshuffling the order, alternating day and night performances, and, by necessity, drastically mashing the epic three-day musical bounty into a tight 79 minutes. This requires tough calls like discluding the Grateful Dead (who were also cut out of Michael Wadleigh’s Woodstock) and making potentially controversial picks like “Feelin’ Groovy” for Simon & Garfunkel’s number, a lighter-weight choice that infuriated Paul Simon. Jimi Hendrix’s legendary set is only represented by “Wild Thing,” but it was during this cover that Hendrix mimed sex with his Marshall stack and set his guitar ablaze, so that had to be the one. Monterey Pop’s performances are all highlights. A pre-fame Janis Joplin stuns the audience (“Mama” Cass Elliot is visibly awed) as frontwoman of Big Brother and the Holding Company with the barnburning blues of “Ball and Chain,” in a name-making statement. The Who tear through an excoriating “My Generation,” with Keith Moon bashing through dozens of drumsticks before mod, scarf-clad Pete Townsend’s obligatory guitar-smashing climax. Redding, in a dapper green suit and performing six months before his death, brings a touch of old-school showmanship and romance to a devastating version of “I’ve Been Loving You Too Long,” miles from the ponderous psychedelic guitar exercises of the underrated Berkeley band Country Joe and the Fish.

The film concludes with an unbelievably virtuosic performance by Ravi Shankar, edited to heighten the excitement of the call and response with the percussionist. When shown the footage by Pennebaker during editing, Shankar, whose full Monterey set lasted four hours, told him it was “the best raga I’ll ever do.” Hendrix and the Monkees’ Micky Dolenz are shown in the crowd loving Shankar’s performance, one of many testaments to this festival’s boundary-free good energy. (For the extreme contrast of a bad-trip comedown, there’s the nightmarish Altamont festival featured in the Maysleses’ Gimme Shelter, two years later.)

Jefferson Airplane, Canned Heat, and South African jazz icon Hugh Masekela round out the set list of Monterey Pop. The Mamas & the Papas are allowed three songs, as Pennebaker had a loose idea that the quintessentially California band would be the film’s nucleus (we also see members Cass and festival co-organizer John Phillips placing calls backstage and enjoying the show with the rabble). The movie gains poignancy from the fact that Mama Cass, Joplin, Redding, Hendrix, Moon, and others would be dead too soon afterward. Their dogged chronicler, the proudly for-hire “working director” Pennebaker, persisted for another half-century and change, preserving on-the-fly history as it happened with a boyish enthusiasm and passion that were uniquely his. 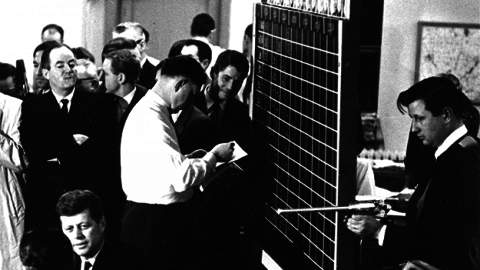 By Eric Hynes
Les Blank makes it look easy in his film about nonfiction pioneer Ricky Leacock, How to Smell a Rose, but theirs is a rare art
Subscribe to the Magazine