How to Smell a Rose: A Visit with Ricky Leacock at His Farm in Normandy

It’s taken far too long, but the late Les Blank is finally having a bit of a moment. Last fall the Criterion Collection came out with Always For Pleasure, a glorious, 14-film box spanning nearly 30 years of his work, some of which has been showing up on TCM and all of which can be seen on Hulu Plus. Now this summer has seen two posthumous theatrical debuts, the long-buried Leon Russell knockout A Poem Is a Naked Person, and now the self-explanatory How to Smell a Rose: A Visit with Ricky Leacock at His Farm in Normandy—co-directed by Gina Leibrecht—which was recorded in the late 1990s but finally hits theaters this week at New York’s Film Forum. Considering Blank’s filmography, it’s fitting that one release has centered on music (joining The Blues Accordin’ to Lightnin’ Hopkins among many others), while the other is largely fixated on food (titles like Garlic Is As Good As Ten Mothers and Yum, Yum, Yum! give you a taste). Yet it’s even more fitting that what they’re really about is hanging out.

The majority of How to Smell a Rose takes place in the kitchen, where trailblazing filmmaker and cameraman Leacock makes bouillon, chops vegetables, and talks about his 70 years in film. In the middle of softening a whole chicken over a stovetop flame, he realizes he’s missing an ingredient, so hops in the car, heads into town, and buys three sausages. That’s the entire scene. No metaphors, no thematic justifications, just two old guys driving to the butcher shop. Blank’s films are filled with this sort of thing—common tasks and behavior given space to play out, and given no greater meaning than that the filmmaker finds it interesting. And, if only because of his sincere engagement, it always is. How to play the blues, how to peel garlic, how to make a banana-yellow Indian costume, how to custom-fix an accordion, how to keep an endangered culture alive—it’s all worth filming, all worth watching, all worth celebrating. Blank’s films often feel like the end of Spend It All, his 1971 look at the remnants of the Cajun community in Louisiana. Musicians casually play outside. Kids are running around. A pig is dragged out, slaughtered, cleaned and cooked. Then the soundman gets involved, rubbing the skin of the pig as one of the musicians mans the boom mic, grinning. They’re eating, playing, making—they’re hanging out. Blank doesn’t vanish into these scenes, doesn’t pretend to go native. (He’s the conspicuous, big-bearded hippie whenever he wanders into frame.) But he is very much in the room. Yum, Yum, Yum! A Taste of Cajun and Creole Cooking

“You have to have a relationship with the people you’re filming,” Leacock tells Blank at one point. “Even if they’re people you dislike. I spent months filming the Ku Klux Klan. I don’t agree with the Ku Klux Klan. But that’s irrelevant. I never ever had an argument with the Ku Klux Klan, because I’m there to try to see how they tick. It’s nothing to do with what I think or don’t think. But there has to be some sort of mutual respect.” While it’s hard to imagine Blank spending time with the Klan—he tended to make films about people with whom he could literally break bread—Leacock’s words certainly rhyme with Blank’s approach. See how he goes from a funeral march to a St. Patrick’s Day party to Mardi Gras in his New Orleans film, also called Always for Pleasure, without measuring one against another. Or watch him transition from a backyard Cajun cookout to chef Paul Prudhomme’s trendy New Orleans café in Yum, Yum, Yum! A Taste of Cajun and Creole Cooking. The former certainly makes for better cinema, but Blank nevertheless gives the latter its own moment.

Leacock’s words also echo his onetime associate Albert Maysles’s rejection of the notion of a strictly objective, fly on the wall camera, which he called, “an instrument without a mind or a heart to control it.” To Maysles, what’s lacking from that popular notion is the participation of empathy. “If it’s somebody that you can’t find affection for, you can still make a film of that person, and be fair to that person if at least you try your best to understand them,” he told the writer Liz Stubbs. “So much of it hinges on your ability to empathize.” The legacy of that ethic can be seen in recent films like A.J. Schnack’s sober and respectful chronicle of the Republican campaign trail, Caucus, and the upcoming Welcome to Leith, which chronicles the arrival of colonizing white supremacists to a tiny North Dakota town (it debuted at Sundance earlier this year and opens theatrically next month). It’s irrelevant whether filmmakers Michael Beach Nichols and Christopher K. Walker share the politics and worldview of their neo-Nazi subjects (they don’t)—what matters is that they extend enough mutual respect, to borrow Leacock’s language, to show us how these people tick. Where it takes them is to a motel room in the middle of nowhere, as the only ones with knowledge of the whereabouts of the villainous, fresh-out-of-prison racist Craig Cobb; what they see (and show) is a cowed old man sitting uneasily at the edge of an anonymous bed, reaching for the phone and the Internet, fumbling to feel powerful again.

A Poem Is a Naked Person

Where A Poem Is a Naked Person exemplifies Blank’s free-associative, poetic construction—something is always indirectly suggesting another thing, intuitively, as if by scent—How to Smell a Rose is a bit more straightforward, even operating as a primer, complete with historical and contextual intertitles, for those unfamiliar with Leacock’s peripatetic life and extremely influential work. The wandering approach is missed, but at least Leacock’s reminiscences have an air of the casual, filmed on late-Nineties vintage digital video while a pot steams in the kitchen and the dog scampers around the yard. He talks about innovating synchronous sound with D.A. Pennebaker, reminisces about planting a microphone in JFK’s ashtray for Primary, and mocks the industry for passing on Monterey Pop, which became a hit. He mentions working with the legendary Robert Flaherty on Louisiana Story (48), and suddenly a full century of American documentary filmmaking comes together in the room. “You look, look, look with the camera,” Ricky Leacock says, quoting Robert Flaherty, while Les Blank looks, looks, looks with his camera.

Leacock describes his MO as “trying to create the feeling of being there,” which is the sort of thing that sounds easy but isn’t, not in the slightest, even if these two filmmakers present in the room proved to be masters at it. “It has nothing to do with truth, or this and that. What’s it like to be someplace, with somebody?” With How to Smell a Rose, Blank and Leibrecht give us a glimpse of what it was like to hang out with Ricky Leacock and his partner Valérie Lalonde in Normandy. “What I really wanted to make was a film of Ricky being Ricky,” Blank says via voiceover. Low and behold, here’s how Ricky slices a tomato, why he doesn’t drink anymore, what he thinks of digital editing, what Lalonde thinks of his flirtations with women, what he’s like when thinking about what to say, or saying nothing at all. To Leacock and Blank, hanging out isn’t what we do to avoid living—it’s how we offer our truest selves, and when the joys and mysteries of life are most fully present. The Blues Accordin’ to Lightnin’ Hopkins

With Blank especially, you don’t get the sense that when people come together—to make music, to dance, to cook, to drink and joke around—that they’re avoiding their responsibilities. Perhaps they are, but that’s not how he presents it to us. His cinema isn’t a cinema of longing, of what’s missing or beyond the frame; it’s a cinema of the moment, with the camera always up for discovering what’s next. It helps that Blank’s industry was an expression of pleasure. And it engenders a desire to be a part of that pleasure, as well as to make it. “Every day is exciting,” Leacock says near the end, before introducing the idea of honoring both work and pleasure not as a balancing act or struggle between warring priorities, but as a call to do more of it all. “I need to get organized. Especially if you like cooking and living in the country. Walking the dog on the beach. Being in love with a lovely person. I need all the time I can get,” he says. It’s a testament to both filmmakers that those words don’t come off as tragic in light of the fact that both have since passed on. Actually, after spending an hour hanging out with Leacock and Blank, those words seem rather triumphant. Would that we all could be that present in the room.

How to Smell a Rose opens today. Welcome to Leith opens September 9. By Genevieve Yue
Taking stock: an in-depth look at the alternative routes to processing film in an age of waning options Back Home: Les Blank’s A Poem Is a Naked Person

By Daniel Eagan
Behind the music film about the great Leon Russell, unreleased for decades and premiering at South by Southwest 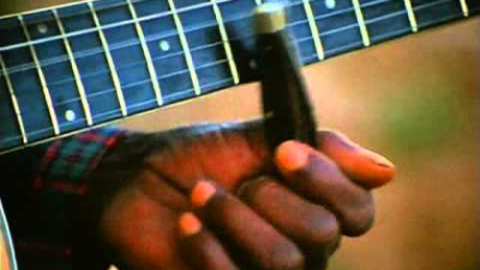 By Justin Stewart
In honor of his passing, we repost this overview of Les Blank's collaborations and career, plus a short conversation with the filmmaker

By Genevieve Yue
Taking stock: an in-depth look at the alternative routes to processing film in an age of waning options
Subscribe to the Magazine

Back Home: Les Blank’s A Poem Is a Naked Person

By Daniel Eagan
Behind the music film about the great Leon Russell, unreleased for decades and premiering at South by Southwest

By Justin Stewart
In honor of his passing, we repost this overview of Les Blank's collaborations and career, plus a short conversation with the filmmaker