The movie begins with the names of the dead filling the screen on reams of papers. It’s a visual motif that might remind viewers today of Schindler’s List. Here they emerge from a printer on green-bar computer paper, which was so ubiquitous in the 1980s that we are immediately situated in that era. These are contemporary statistics—most of the dates on the right side of the paper say 1984, moving ahead chronologically, day by day, inexorably leading up to the year of this film’s release. Buddies (1985), which was written, directed, produced, and edited by Arthur J. Bressan Jr., begins with these names not to commemorate deaths but to draw urgent attention to them. A film of seething anger cloaked as a gentle hospital-bedside two-hander, Buddies was the first theatrical feature to deal with AIDS head–on. The landmark television movie on the crisis, An Early Frost, starring Aidan Quinn, broadcast on November 11, 1985, just four days before the general theatrical release of Buddies but two months after the film’s official premiere at San Francisco’s Castro Theater. Meanwhile Bill Sherwood’s Parting Glances was a year away, and it would be five years before Norman René’s Longtime Companion was in theaters—both films that, for reasons mostly having to do with access and budget, have retained a higher profile than Bressan’s film has managed. If ever a film feels made out of moral necessity, it’s this one. Produced for around $27,000, Buddies is spare and delicate; at times it feels like it could crumple like tissue paper before your eyes at any second, at others it’s as angry and outspoken as a film from the eye of the hurricane needs to be.

Using loneliness and isolation as both aesthetic and political tactics, the overwhelmingly intimate Buddies scrupulously keeps its cast at two: Robert (Geoff Edholm), a hospitalized young man dying of AIDS, and David (David Schachter), the volunteer “buddy” from a local gay help center who has been assigned to take care of him. Everyone else in the film—nurse, gym instructor, reporter, David’s lover—are relegated to being either offscreen voices or somehow obscured in the shot so we cannot see their faces. This approach makes the film’s big location, New York City, seem sadly small, a place where there are only two kinds of people: the sick and the healthy. And the latter cannot afford to be complacent because this pandemic, this catastrophe, is not just a gay problem but a human problem, one that affects all of us. In playlike fashion, blond Robert and brunette David are set up, perhaps too conveniently, in opposition. All the better for dialectical back-and-forths, though, as the more ideologically driven yet tragically bed-ridden Robert ends up teaching the naïve David about the importance of political awareness and, finally, activism. A freelance typesetter, David is working on a book about AIDS, though his job naturally keeps him at a clinical distance from the text itself. At one point, David shows Robert some of the galleys, and Robert notes that one of the chapters, written by a fundamentalist speaking on behalf of “family values” (a term that gained frightening prominence in the post–Anita Bryant Reagan ’80s), posits the disease as a “retribution of God.” Robert is horrified, his face contorting, repulsed at the evil idea; David’s defense of the chapter’s inclusion in the volume is the importance of showing “all sides,” an excuse we find still has social currency today. The film also posits that the acceptance and relative ease that David has experienced in his life regarding his sexuality (loving, accepting parents; a five-year monogamous relationship that began at age 20) has made him mild and apolitical. Robert, on the other hand, has always had to fight (his parents rejected him when he came out of the closet; his lover dumped him when he became sick), and he continues to do so from what will become his deathbed. Such intrinsic, epochal differences that they’ve had as gay men in America lead them to elemental debates, delivered by the actors in hushed performances that have a movingly mechanical quality, a studiedness that creates an enveloping atmosphere of direct-address urgency. (In Bressan’s methodical, mannered approach, one might even see a mild affinity with the work of a certain similarly named French filmmaker.)

Many queer critics today may not have even heard of Bressan. His trajectory as an out filmmaker tragically mirrors that of many an out gay man from the ’70s to the ’80s. Equally interested in the erotics and the politics of homosexual life, Bressan made both experimental, hardcore-flecked narrative features (Passing Strangers, 1974) and timely political documentaries (Gay U.S.A., 1977) before developments of the following decade made Buddies such a moral imperative for him. “We had a decade of parade films and coming-out films, and I made a lot of those movies,” he said in an interview around the time of the film’s release. “But when something like AIDS comes up, it is important for our artists to deal with what is going on.” Like a final will and testament, Buddies would be Bressan’s last movie, as the filmmaker died from AIDS complications just two years after the film’s release. And in 1989, the disease would also kill Edholm, who invests Robert with such shattering conviction and tremulous humanity.

Today, this knowledge gives the already pared-down, ghostly film another echo of lamentation. One is unlikely to leave Bressan’s film thinking of anything other than the faces of these two men: Edholm’s hollow-eyed desperation, his will to live apparent in every lip tremor and tooth-gritted smile; Schachter’s vacant unworldliness slowly giving way to wracked compassion. The actors’ deliberate, purposeful delivery is as meticulous as Bressan’s approach, reaching their emotional apex in a late-film sequence in which David asks Robert to describe what he would do if he could have just one single, healthy day. His response varies from the achingly mundane to the unapologetically sexual to the stridently political, and it speaks in the most eloquent—and shattering—manner to the many reasons why queerness is not simply a way of being but an identity, one that is necessarily private and public at the same time. Buddies may have historical importance—and indeed that 1985 release date communicates volumes in and of itself—but if it were just a proselytizing issue film it’s doubtful we’d be talking about it today.

A new 2K restoration of Buddies from Vinegar Syndrome, distributed by Frameline, opens at the Quad Cinema on June 22. 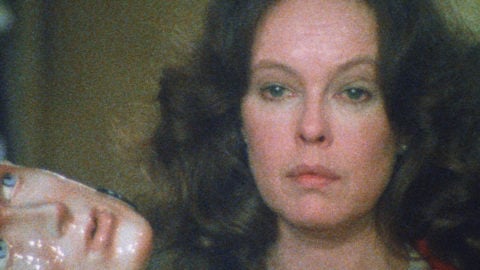 By Michael Koresky
Not up to code: in Edward Dmytryk’s Crossfire, the unspoken motivations for murder loom large
Subscribe to the Magazine