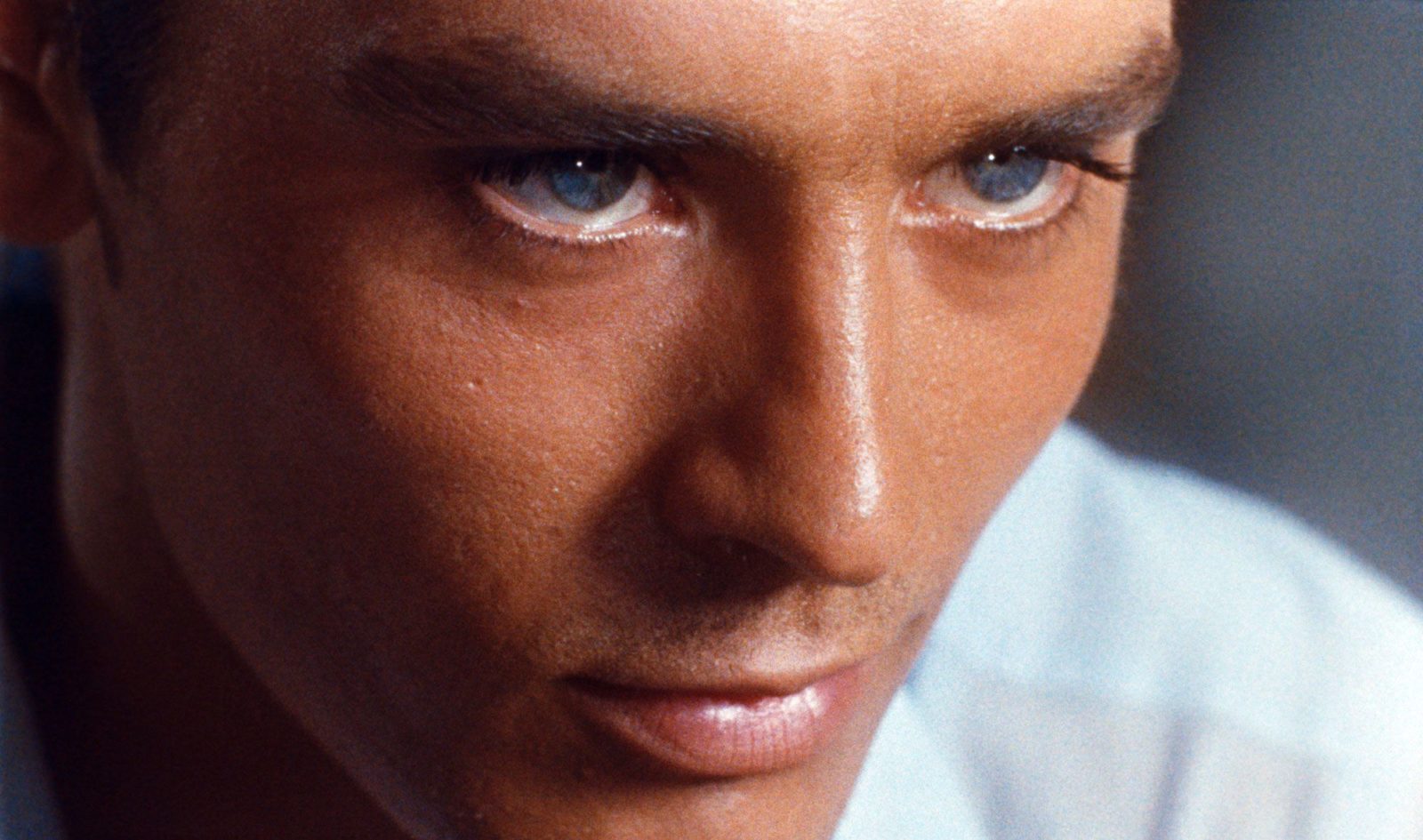 Flaunting a beauty so cruel it became the stuff of myth, Alain Delon first terrified viewers with his perfection in 1960’s Purple Noon (Plein soleil). He had appeared in smaller roles for a few years before that, such as Pierre Gaspard-Huit’s satisfactory piece of period eye candy, Christine (1958), hovering around Romy Schneider and the edges of the screen like an angel in waiting or, depending on your perception, a demon ready to pounce. At this point in his career, he didn’t look or move like other French male stars with their burly, recessive Jean Gabin cool; he was tactile—lithe and slim, he gracefully slid across the screen with the confidence of a jackal. It’s conjecture to say that he loved being looked at, but in Purple Noon there’s something in that devious smile, and the way those crystal-blue eyes and delicately arched eyebrows are caught in high-angle close-up, that makes it unavoidable to assume so: he seemed preternaturally aware of the gaze of the camera and its ability to grant him superpowers.

René Clément’s film is luscious and sinister (two words that could describe Delon), and in this adaptation of Patricia Highsmith’s The Talented Mr. Ripley, the actor is on display, in full color, in various stages of stylishness or shirtlessness, yet there’s one early moment that feels intensely symbolic of Delon’s star status. Playing dress-up in front of a full-length mirror, brushing his hair and donning the dapper duds of his “friend” Philippe Greenleaf (Maurice Ronet), with whom he has recently insinuated himself, Delon’s Tom Ripley begins to gently kiss his reflection, whispering imaginary sweet nothings to “Marge” (Philippe’s girlfriend). In a sense he’s becoming Philippe, the man whose identity he will later assume after killing him, but there’s something more: this is Tom’s Narcissus moment, and the mythological imagery is hard to miss. Doomed to despair and death after falling in love with his own, unattainable image, spied in a clear pool of water, Narcissus is the dark side of the Adonis. Delon, whose extreme beauty has been spoken of as both his armor and his Achilles heel, would be followed by mirrors and doubles throughout the ’60s: in Visconti’s The Leopard (1963), we first see his character as a reflection approaching Burt Lancaster, who’s shaving in his looking glass; in Louis Malle’s chapter of the anthology Spirits of the Dead (1968), adapted from Edgar Allan Poe’s short story “William Wilson,” he is haunted by his own doppelgänger; various publicity shots poked fun at his androgynous beauty, often showing him primping or preening before makeup or handheld mirrors.

In an industry overwhelmed by an obsession with masculinity, this kind of male Narcissus is uncommon and therefore noteworthy. Rumors have long abounded about Delon’s early homosexual dalliances, exacerbated by the details of his close and influential friendship with gay French New Wave actor Jean-Claude Brialy at the outset of his career, but Delon’s actual sexuality is here less the point (as are his recent, unfortunate homophobic statements) than the specific homoerotic power that Delon wielded in his very face and body. He was the only male French star no one could deny was as beautiful as Brigitte Bardot or Catherine Deneuve, an objet d’art all his own, in a way that went far beyond pinup or teenybopper. A former unruly child from a broken home, Delon wasn’t wholesome; there was menace in this man, alongside sensuality and seductiveness, a modern kind of European masculinity. Ultimately, of course, Delon would defect to cinema’s Isle of Man, trenchcoating his beauty and fully embracing the dark machismo of the gangster and police pictures that would rebrand him as a tough guy for the ages and make him a bankable French icon alongside boxer-mugged Jean-Paul Belmondo.

Tom Ripley remains the Delon of our dreams, however. This is in no small part because the source material has so much built-in queerness. His unreasonable prettiness hasn’t necessarily made him a gay icon, but Purple Noon (and to a certain extent Visconti’s Rocco and His Brothers, released the same year) did forever establish him as a figure of simmering homoeroticism. The film’s intoxicating, sun-dappled mix of pleasure and danger feels like an extended, teasing bout of foreplay, a natural precursor to something like Alain Guiraudie’s Stranger by the Lake, minus the erections. While not as faithful to the events of Highsmith’s book as Anthony Minghella’s 1999 adaptation, Clément’s version similarly soaks in a homoeroticism as pervasive as the sunlight on the Mediterranean. The Grace Kelly–level lighting that creates a kind of cinematic halo around Delon makes his Tom Ripley among the most objectified men in movies—one would be hard-pressed to find such unabashed camera lust for a male outside of silent star Rudolph Valentino. In his remake, Minghella would similarly flatter Jude Law at the height of his beauty, though Law was playing the doomed American Dickie Greenleaf (Highsmith’s name, changed to Philippe for the French film); this casting choice makes a world of difference, placing us in the position of desiring what Tom (a pasty Matt Damon) desires—namely, the carefree, wealthy Dickie, whose father has hired Tom to persuade him to return to San Francisco from his endless pleasure vacation in Italy. In Clément’s film, Philippe Greenleaf is unattractive despite Ronet’s doughty handsomeness, selfish, petty, and sexist; instead, it’s the mysterious, unknowable Tom we are encouraged to want, and considering his eventual murderous actions, this puts us in a more complicated, uncomfortable position as viewers. It’s revealing to note that Delon was originally cast as Philippe, and convinced the filmmakers to let him instead play Tom, a decision that undoubtedly changed the text of the film, and which also proves the actor’s self-awareness and ability to harness a role for his own needs at such an early moment in his career.

Delon’s disturbing ambivalence as Tom Ripley is inextricable from his sex appeal. First seen at an outdoor café showing off his skills at forging signatures to Philippe, he radiates ease in his own body and bearing. Yet there’s a difference in Tom from so many of Delon’s later, more self-sufficient, emotionless characters: his need to be admired and liked, especially by the rich, devil-may-care Philippe. From the beginning we can feel his distaste and jealousy for Philippe’s carousing friend, Freddy, who gallops onto the piazza like a quintessential ugly American, undoubtedly because this performative, boisterous man distracts Philippe. The covetous Tom wants Philippe all to himself, and he nearly has him out on the open sea—at least when not under the watchful eye of Marge (Marie Laforêt), whom, crucially, Tom and the film both come to see as a nuisance, despite Laforêt’s beauty. It’s Delon’s physicality that defines Tom and therefore the film. In retaliation for intentionally tilting the boat while he and Marge are making love below deck, Philippe casts him away in a dinghy tethered to the sailboat; the skin on his exposed back burns and blisters under the blazing sun. The sequence makes a display of Tom’s body, an appropriate punishment for a character—and actor—who needs to be seen.

Clément fixes our gaze, and Delon gladly drinks it in. Look at the way he rips off his shirt and tears into a piece of fruit in one voracious gesture—directly after murdering Philippe and agilely disposing of his heavy corpse. He knows we’re looking. For most of Purple Noon’s second half, Delon is alone on screen, avoiding the police or hotel maids or passersby, but do we really believe he doesn’t on some level desire getting spotted and found out? Of course, he does, in an ending that Highsmith herself disliked for deviating from her book and creating moral closure. Besides, it feels redundant. The camera already has caught him. By Scott Eyman
Paradise lost: Luchino Visconti's epic of a family's strife in the big city returns to theaters with a 4K restoration 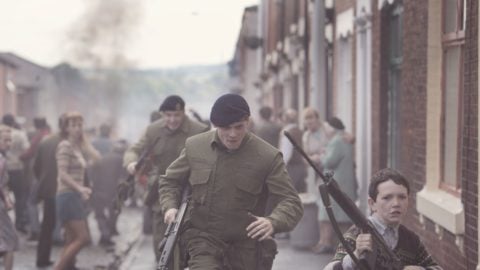 By Giovanni Marchini Camia
The glories of Snowpiercer uncut, and the dangers of high-adrenaline realism in Northern Ireland thriller '71

By Scott Eyman
Paradise lost: Luchino Visconti's epic of a family's strife in the big city returns to theaters with a 4K restoration
Subscribe to the Magazine

By Giovanni Marchini Camia
The glories of Snowpiercer uncut, and the dangers of high-adrenaline realism in Northern Ireland thriller '71