In 2017, I interviewed my old acting teacher, Sam Schacht, about so-called “Method acting.” Schacht studied with Lee Strasberg, is a lifetime member of the Actors Studio, and now teaches at the Stella Adler Studio. At one point during our discussion, he brought up Kristen Stewart: “[She] is extraordinarily authentic… I haven’t been so enthralled by an actor or an actress in a long time. When I saw Clouds of Sils Maria, I thought, Who is this girl? There is absolutely magic that happens for some people.”

“Magic” doesn’t lend itself to language or analysis, and this is why it is sometimes difficult to talk about Kristen Stewart—what she does and how she does it. There’s a certain mistrust of “magic,” as though people think there’s got to be more to it, acting seems too “easy” otherwise. Actors are rewarded for their strenuous preparations by breathless pieces in the entertainment press, detailing “So-and-so didn’t bathe for the whole shoot!” “So-and-so lost/gained 150 pounds!” Strenuous preparation and obvious visible transformations sometimes win Oscars, and of course there’s nothing wrong with much of this kind of work. It’s thrilling in its own way. But not at the expense of “magic” like Stewart’s.

When Twilight hit the multiplex, Stewart, along with Robert Pattinson, was thrust into a kind of stardom she didn’t seem prepared for, despite having had a busy career as a child actor. She was not red-carpet-ready. She was often visibly awkward, her long hair falling over her face. Sometimes she’d heave it back, but reluctantly, almost like she cringed away from being seen. People seemed irritated by this, by her behavior, by the films, by the whole thing. I found her compulsively watchable. She didn’t try to be something she wasn’t. In a 2015 interview with Patti Smith for Interview magazine, Stewart spoke of that time, showing her eerie self-awareness: “I could have gotten really unlucky and compared myself to another kind of actress and felt inadequate. I can’t, like, put on a show. I’m not a performer.” Meanwhile, teenage girls were behaving like the cultural weather vanes they so often are, pointing the way towards the Next Huge Thing (and were mainly mocked for it). The post-Twilight careers of both actors have more than justified the tween contingency’s initial response. 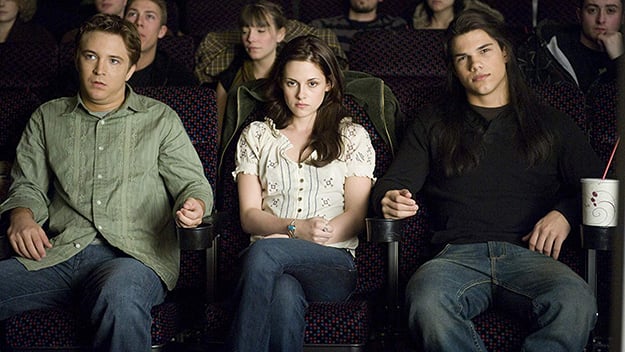 But let us not dismiss Twilight. Stewart doesn’t. She said to Patti Smith, “Anybody who wants to talk shit about Twilight, I completely get it, but there’s something there that I’m endlessly, and to this day, fucking proud of. My memory of it felt—still feels—really good.” While Stewart’s fans now flock to Olivier Assayas and Kelly Reichardt films, they are also a demographic to be reckoned with on Twitter. Not every actress inspires this kind of love and devotion.

You hear all the time about how the camera “loves” this or that actor. Presumably, the camera doesn’t “love” everyone. Being truthful is one thing. Being truthful when a camera is an inch away from your face is another. The camera is a sensitive lie detector. Beginning actors are sometimes afraid of it for that reason. I asked Jennifer McCabe, an Assistant Professor of Theatre at Lehman College, as well an adjunct professor at NYU—where she teaches on-camera acting (among other things)—how she works with students to loosen up in front of the camera. She came up with an exercise she calls “the sunbeams”: “I ask that they imagine sunbeams coming out of the lens, instead of fangs and judgment. The sunbeam image allows [them] to begin to experience their relationship with the camera, not to the camera, and also breeds courage. So they move their face around as I prompt, ‘Okay, now let the sunbeam hit your right cheek … your left cheek … your neck…’ And they move their face around and it looks so beautiful and tender and vulnerable because they are letting the camera—letting us—in. They are letting themselves be seen.”

Stewart feels the sunbeams on her face: she works with the camera in an extraordinarily intimate and vulnerable way. It is her primary relationship. Her awkwardness does not close her off, or make her tighten up. There’s a part of her that always seems a little bit uncomfortable being looked at, but what is special about Stewart—and not often remarked-upon—is that she doesn’t try to combat this. She doesn’t try to correct it. She just lets us see that part of her. She lets us see her discomfort and shyness. This is where her magic really lies. Can it be taught? I don’t think so. Yes, her beauty is important, but more than her beauty, the camera loves her transparency. Stewart’s talent is mercurial. There are lightning flashes of openness, spiked with reticence, there are quick retreats to safer ground, clouds of inner doubts, and a sharp intelligence always struggling to be expressed. It’s never just one thing. When people complain about her, they tend to call her acting “flat,” or “boring.” It doesn’t seem to be “acting” at all. Well, yes, exactly. People take acting classes for years to try to do what she does naturally. Does she have a huge range? No, I don’t think so (and I also think “range” is overrated.) Range or no, Stewart is able to bring forth different shadings and energies depending on what is needed, without pushing. The woman in Personal Shopper is not the same as the one in Certain Women. Or Clouds of Sils Maria. She is so aware of what she is doing I have no doubt she could stroll through a crowded Times Square and decide to “mute” her beauty, mute her Kristen-Stewart-ness—and she would not be recognized. (Famously, Marilyn Monroe was able to do the same thing and douse her own inner key light.)

In his book The Art of American Screen Acting, 1912-1960, Dan Callahan wrote of Greta Garbo: “In close-up in The Joyless Street, the camera seems sure that Garbo has something, but just what it is isn’t clear yet. Is she a sexpot? Is she ill? Just what is going on with her? Pabst knew what he had: ‘Such a face you see once in a century,’ he told the films lead, the formidable Asta Nielsen.” At another moment, Callahan observes, “Garbo works alone.” So does Stewart. Olivier Assayas was so captivated that practically the entirety of Personal Shopper is Kristen Stewart onscreen with herself. Not too many actresses can hold the screen the way she does in Personal Shopper, doing nothing more than texting, reading texts, riding a scooter, looking at clothes. There’s a scene in The Joyless Street (1925) where Garbo’s destitute character tries on a fur coat in front of a full-length mirror. She preens. She rubs her hands over the fur. She turns this way and that. She falls into the mirror in a daze of self-projection and self-absorption, made thrilling by Garbo’s self-belief. There’s a similar scene in Personal Shopper, where Stewart stands in front of full-length mirrors, trying on a sheer dress with a strappy harness undergarment, all as Marlene Dietrich croons “Das Hobellied” in the background. Stewart does not try to “do” anything with the scene. She looks, she adjusts the straps, she turns this way, that way. Other actresses would need to indicate “what the moment is about.” Stewart is beyond that. She’s so relaxed it’s almost like the camera isn’t there at all. Often Stewart’s best work is in closeup. The lines are beside the point, she sometimes seems to resent having to say them. What matters is her thinking around the lines, what matters is what she chooses not to say. Some of her gestures are habitual, poker tells, but she doesn’t try to inhibit them, she doesn’t say to herself, “No, that doesn’t belong here.” And so in role after role she pushes her hair off her face, puts her hand on her forehead, glances up and to the right before speaking. This is her, navigating her emotions and her relationship to language and thought. So much of acting is about creating the illusion of spontaneity. Stewart truly is spontaneous. (The  conversation between Stewart and Shia LaBeouf in Variety’s “Actors on Actors” series is fascinating because it’s so process-oriented, and people rarely ask Stewart process questions. She knows exactly what she needs and why she needs it.)

In the final scene in Seberg, she sits at a bar by herself, smoking, and thinking, as the credits roll by her face. It’s a long take and Stewart has to fill it. She does. Alone. In Cafe Society, her final shot is a golden-hued old-school closeup, where Stewart’s face has to do all the heavy lifting of the moment. Without any dialogue, she has to show what the character is thinking, yearning for, mourning, letting go of. It’s all there, churning around on her face. Stewart doesn’t “nail” a moment, or pour herself into a moment, so much as she circles around it, dipping her toe in, pulling it back out, getting a sense of the water temperature, before taking the plunge.  She trusts the camera’s sunbeams, they caress her face, encouraging her, and she opens up, letting us into her experience. This is the great gift of film acting.

Greta Garbo’s most famous moment is also a closeup, the final shot of Queen Christine (1933). Callahan writes: “[It’s] one of those movie things that you never get over, an always renewable subject for contemplation. It has the inscrutability of life, of creation itself. What does it mean? Whatever you want it to. And Garbo makes that concept seem filled with limitless possibility rather than just empty.”

Stewart, too, is an “always renewable subject for contemplation.”