Where ensembles are concerned, no formula can predict who will emerge and garner recognition. Status and credentials have little bearing, as one gleans from the triumphs of double-amputee-turned-double-Oscar-winner Harold Russell (The Best Years of Our Lives), or Somali-born Barkhad Abdi, who was driving a limo in Minneapolis not long before he was menacing Tom Hanks in Captain Phillips. Nearly 20 years ago, in the case of Kasi Lemmons’s masterpiece of Southern Gothic, Eve’s Bayou, only those gifted with second sight could have foretold that the standout in a cast of Hollywood heavyweights and auspicious newcomers would be an actress with 500 hours of daytime soaps on her résumé.

Second sight is the gift, or curse, visited on Mozelle Batiste Delacroix (Debbi Morgan), beloved aunt in a prosperous black family in 1962 Louisiana who tells fortunes and “is not unfamiliar with the inside of a mental institution.” Mozelle’s backstory is as tragic as any Gothic heroine’s: her three husbands all died in distinctly gruesome fashion and lie together in the family plot. For though she can pinpoint her clients’ fugitive loved ones with unerring accuracy, she sees nothing of her own fate and is helpless to ward off calamity. Nor can she do much to prevent the implosion of her family due to the philandering ways of her brother, esteemed local doctor Louis Batiste (Samuel L. Jackson), and the adolescent fixations of his daughters, 14-year-old Cisely (Meagan Good) and 10-year-old Eve (Jurnee Smollett).

The namesake of a freed slave from whom the Batistes descend (and from whom voodoo and the titular tract of land further stem), young Eve is introduced as a lonely middle child, neglected at parties by her dashing father who prefers to dance with Cisely and a procession of married women. Eve’s closest confidante is her Aunt Mozelle, who recognizes a kinship that may extend to clairvoyance. While Mozelle has a closet full of skeletons (almost literally), she’s the best possible ally for a young girl discovering her powers faster than she can comprehend them. The scenes shared by Morgan and Smollett are among the most sensitive evocations of intergenerational bonding in memory, as they share cigarettes and secrets and talk of things not entirely of this world. It’s hard to believe there isn’t a genuine family tie between them, and that chemistry has much to do with Morgan’s uncanny ability to shift from childlike companion whose remedy for sorrow is eating pomegranates “till our hands turn red,” to stern disciplinarian when the situation warrants (“Play games with me, I swear I’ll slap you blind!”). She may not be able to bear children, much less entertain like Louis’s glamorous wife Roz (Lynn Whitfield), but nothing concerning the Batiste clan escapes her watchful eye. 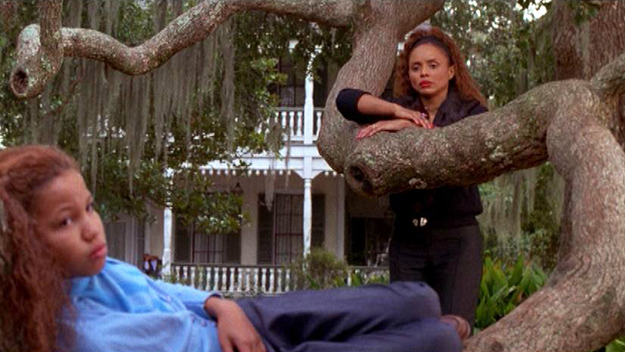 Morgan’s soap opera background prepared her well for the film’s lurid twists and ghoulish fatalities. Off and on for over 30 years, she’s played Dr. Angie Baxter Hubbard on All My Children and its spin-offs, becoming half (with Darnell Williams) of the first African American TV “supercouple” and the first black actress to win a Daytime Emmy award in her category. Her ability to mine gravitas from farfetched plotlines and purple dialogue may have brought her closer to the core of Eve’s Bayou than her celebrated co-stars could reach, and she seems wholly in her element when her new suitor (Vondie Curtis-Hall), on learning of her infertility, vows to plant seeds in her heart. Where other performers would be thwarted by the treacle of the scene, Morgan plays it with surpassing professionalism, glowing like a woman who’s waited all her life to hear the words.

Mozelle’s showcase scene, and the film’s, comes when she recalls how one of her husbands met his fate. She is talking to Eve but facing herself in a mirror, when all of a sudden the figures in her story appear in the reflection and begin speaking their parts. From watching her past unfold she exits the shot and then joins the ghostly tableau—like Vonnegut’s Billy Pilgrim, she has come unstuck in time. “Memory is a selection of images,” we’re told in the opening narration, “some elusive, others imprinted indelibly on the brain.” In this spectral pageant, Morgan shows us the pain of her memories and the ways in which misfortune and superstition can make a person of boundless love a pariah.

“We’re two of a kind, my brother and I,” Mozelle intones repeatedly, and it takes a formidable talent to play the sister of Samuel L. Jackson (at his most magnetic here, with no 12-letter words in sight). But Morgan actually upstages him. She has a way of gliding into a room as though on a dolly, and her reaction shots are so acute that the film uses them as punctuation. Her unsettlingly wide eyes flicker between emotions outsize and minute, and her sultry, worldly-wise voice sounds just as one imagines Ava Gardner’s did before the studio sanded down the Southern edges. She feels born of the bayous, as endemic to the region as Spanish moss. The Supporting Actress Oscar race in 1997 was a contest between a siren launching a comeback (Kim Basinger, L.A. Confidential) and a star in twilight, the oldest competitive acting nominee of all time (Gloria Stuart, Titanic). Basinger took the prize, but with these and other high-powered stars in contention, Morgan was doomed to be overlooked, in spite of her recognition from the Chicago Film Critics Association and the Independent Spirit Awards. It’s worth considering Morgan’s turn not only as a great performance but as the kind of supporting work that’s hardly ever recognized—neither ingénue nor overdue, and not, like this year’s front-runners, a masquerading lead. It fuels the eternal hope that admirers of great performances, like Louis in Mozelle’s prophecy, “open their eyes and see that what they’ve been looking for is standing right in front of them.”