A western is a table with the places already set. The conventions are established, the habitat familiar, so the story can proceed without expositional ado. But a set table can accommodate any dish; likewise, westerns can be traditional or revisionist, literal or allegorical, mythic or realistic. The one quality shared by all of them—even the most gleefully rambunctious—is a feeling that the world being represented has long since passed into folklore; the legend has become fact, and now we’re printing the legend. It was a self-defeating world even at its peak—the cowhands and gunfighters who tamed the West were made irrelevant by the very civilization for which they carved out space. Aptly, then, a smattering of Golden Age directors fighting to hold their ground at the dawn of the New Hollywood used the genre to reflect on encroaching obsolescence.

When Sam Peckinpah made The Wild Bunch in 1969, the western form was reborn. Suddenly—in large part due to the crumbling of the Production Code and instatement of the less restrictive rating system still in place—the streets could be filthy and strewn with refuse, whores and madams could step out from behind their euphemisms, moral arcs could be traced backwards or ignored altogether, and most tellingly, violence had material consequences. With the death tolls in southeast Asia proclaimed to Americans nightly over dinner, Hollywood had a newfound imperative to show death as it was—not the chest-clutching, “Aw-ya-got-me!” renderings that prevailed since the silent era, but the actual writhing, blood-strewn agony attendant to loss of life (often shot in perversely balletic slow motion to amplify the effect). Every post-1969 western existed in dialogue with The Wild Bunch whether it wanted to or not, and many of these latter efforts by studio warhorses can be sampled on TCM in July’s series Shane (Plus a Hundred More Great Westerns).

By 1970 Joseph L. Mankiewicz had made everything from Julius Caesar to Guys and Dolls, but he’d never made a western. For what would prove to be his penultimate film, he chose There Was a Crooked Man…, and instead of writing it himself as per usual, he engaged David Newman and Robert Benton, whose previous script, Bonnie and Clyde, was as influential as The Wild Bunch in deglamorizing carnage-as-entertainment. The Crooked Man label could apply to most of the figures onscreen, inmates at an Arizona prison, but the ringleader (Kirk Douglas) is a special case: a smooth-talking gentleman bandit with half a million dollars stashed in a pit guarded by rattlesnakes, bent on escape whatever the cost. A feral Warren Oates, fey Hume Cronyn, and cantankerous Burgess Meredith are his fellow convicts. Henry Fonda, back in righteous John Ford mode after Sergio Leone made his blue eyes the stuff nightmares are made of in Once Upon a Time in the West, plays the incorruptible warden who walks with a limp and a cane (because the justice system itself is hobbled—end of Symbolism 101). There Was a Crooked Man…

Mankiewicz was no stranger to tales of amoral scam artists—he made All About Eve, after all—and for a time, Crooked Man plays like one of the breezy western comedies James Garner was building a career on (Support Your Local Sheriff, etc.). The humor is oddly scatological for a sophisticate like Mankiewicz, giving the awkward impression of a grandfather who waited as long as he could to pass on his dirty jokes (see also: Billy Wilder’s Avanti!). And it’s awfully poky for a film about the pokey, with little of note happening in the first 90 minutes save for Douglas and Fonda calling each other sons of bitches, balancing law and disorder in a world that hardly incentivizes self-improvement.

But in the last act the director’s intent becomes clear: to bring to light how unequivocally corrupt everyone is. The fact that Douglas never stops smiling, even while evincing sociopathic tendencies, makes him the creepiest of the lot—but not the crookedest. Building to an ending as acridly ironic as that of All About Eve, Mankiewicz directs vigorously, choosing odd, expressionistic angles, employing quick zooms to focal details (like a sheriff’s star), and relying on his remarkable cast to offset the lulls as he assembles his house of cards. There’s also the persistent sense that the director is using the penitentiary as a metaphor for the defunct studio system. Meredith’s elderly character, The Missouri Kid, has a nice life in stir—the guards protect him, the cons respect his seniority, and the warden is constantly improving his quality of life. For the Kid—as for Mankiewicz, whose time under contract yielded bountiful rewards (four Oscars in two years)—it’s daunting to think of a world outside the edifice understood as home, where rules aren’t codified and work is not guaranteed. Loss of structure can be more frightening than loss of freedom.

Mankiewicz’s biographer, Kenneth Geist, claims that Warner Brothers pruned 40 minutes from his initial cut, reducing the film from the epic it was conceived as to a less sweeping two-hour assemblage. The same thing happened to Blake Edwards on Wild Rovers (1971), with MGM redrafting his ending and vastly condensing what he had envisioned as a Greek tragedy on the range. “It was my best film, and [they] butchered it. I beseeched them; they still butchered it,” he lamented of the work he ultimately disowned. But even in mutilated form, it might still be his masterpiece. 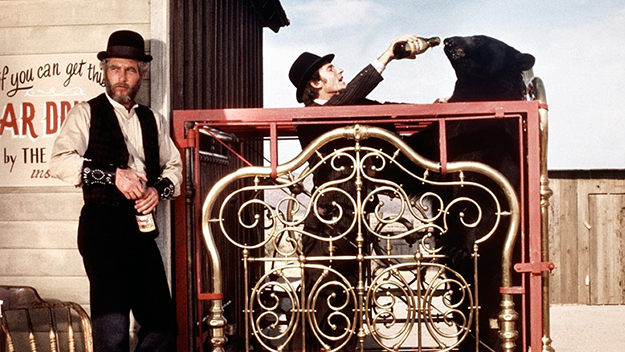 The Life and Times of Judge Roy Bean

Too young to have labored long in the factory, Edwards made his name with such late Studio Era fare as Breakfast at Tiffany’s and Days of Wine and Roses before achieving renown as the mastermind of the Pink Panther movies. It is perhaps surprising that the man who gave us Inspector Clouseau is responsible for the most elegiac of New Hollywood westerns, a film with no romantic illusions about the cowboy lifestyle (“You show me a cowboy that’s got more than a few dollars in his poke, and I’ll show you a cowboy that stopped bein’ a cowboy and started robbin’ banks”), but finds breathtaking beauty in such erstwhile acts of everyday heroism as taming a wild horse in a snowdrift. William Holden offers a gentler, more soulful variation on his Wild Bunch turn—a performance so lovely, indeed, that it even sparks moments of believable emotion in Ryan O’Neal. When Holden’s wrangler admits he’s nearly 50 and broke (and looking a decade and a half older from thankless labor), he could be speaking for every aging director steadfastly awaiting his marching orders—and the studio’s scornful treatment of his film (satirized in 1981’s S.O.B., Holden’s swan song) is all the testament needed for the plight of the hired hand with nothing to call his own.

Unlike Mankiewicz and Edwards, John Huston had sown his western oats repeatedly over the past two decades, with the Mexico-set Treasure of the Sierra Madre, The Unforgiven, and the modern-day rodeo drama The Misfits. He gravitated to protagonists with outsize temperaments like his own, and might never have had a more colorful subject than the title rogue of 1972’s The Life and Times of Judge Roy Bean (Paul Newman). Holding court in a saloon christened The Jersey Lily (after his obsession, actress/socialite Lily Langtry), Bean’s authority is absolute: he bills himself as the “Law West of the Pecos.” Whatever his crime, be it horse theft or interrupting a poker game, the defendant is shot, fined, and hanged—in that order. Bean’s professed qualification is that he “know[s] the law, having spent [his] entire life in its flagrant disregard.”

Huston’s film is above all a meditation on mythologizing. “Maybe this isn’t the way it was,” the opening titles declare, “…it’s the way it should have been.” (The factual Bean only sentenced two men to hang, one of whom escaped with his life.) Magical realist elements are introduced as the parade of narrators, speaking directly to the audience, recount the circumstances of their deaths and then genially hand off voice-over duties like the baton in a relay race. “Vintage” photos are used in montage, and adversaries played by A-listers in walk-on roles are drawn as fairy tale villains, most memorably Stacy Keach’s Bad Bob, a vicious albino killer who drinks coffee straight from the pot. (The same year Keach played the lead in Fat City, arguably Huston’s best film of the period, a revisionist boxing film that likewise explodes that genre’s clichés.) Screenwriter John Milius despaired of Huston’s alterations to his script, which he felt softened Bean’s character from a frontier Lawrence of Arabia into a lovable scalawag who takes his pet bear on picnics. Milius underestimates the finished film, but in the one truly egregious sequence to which he refers, Bean and his common-law wife seesaw with their furry companion while Andy Williams croons a song entitled “Marmalade, Molasses, and Honey.” This points to a recurring oddity in early ’70s westerns, which Roger Ebert used to call the Semi-Obligatory Lyrical Interlude. It began with the cycling frolic in Butch Cassidy and the Sundance Kid, though its roots were surely in classical Hollywood where songs were shoehorned into plots with abandon. Peckinpah’s Ballad of Cable Hogue upped the ante by having his characters sing along, but the bizarre trope found its apotheosis in Roy Bean’s ursine shenanigans, which cry out for a Werner Herzog commentary track. It’s hard to know which is stranger: that the insipid song was co-authored by David Lean’s right-hand composer Maurice Jarre, or that it earned the film its sole Academy recognition. (It lost the prize to the power ballad from The Poseidon Adventure, and all was weird with the world.)

Throughout the film, Bean emerges as a self-aggrandizing fabulist with the largest Madonna/Whore complex on record, who revises his rules (and rulings) as he goes and retains his grip on the town through unassailable self-assurance and deranged pride. This is a man who employs a photographer to take portraits of hanged men, not yet cut down, as Bean, his “marshals,” and the bear crowd into the frame—in short, not the type of man who’d be the hero of his story in a Golden Age film. (Walter Brennan won an Oscar for playing the judge in The Westerner, as antagonist to noble Gary Cooper.) Yet Huston achieves a curious feat: as Bean finds his jurisdiction challenged by railroad men, oil speculators, and moral crusaders (ever the symbols of the dying west), we start to sympathize with the declining judge. Modernity has changed the town into a different kind of viper’s nest—people may not piss out of windows anymore, but are corrupt and dehumanizing in ways Bean and his kind could not fathom. The judge and all he stands for are now like the aged mountain man played by Huston himself in a cameo, weary of life and seeking to die on his own terms, but denied even that small mercy by those who lay claim to the land. Perhaps only a relic of another era can grasp the dimensions of that feeling.

There Was a Crooked Man… airs July 12 on Turner Classic Movies; and Wild Rovers and The Life and Times of Judge Roy Bean on July 26.