At this year’s Cannes Film Festival, a number of Russian films looked at war through an angle of heroism that reinforced populist agendas in an increasingly fractured Europe. The case was much different with Beanpole, the new film by the Russian director Kantemir Balagov. Beanpole—which played in Un Certain Regard—is a war film in the deepest sense since it depicts the devastation wrought by conflict, without a single battle scene.

Beanpole opens in Leningrad, in 1945, immediately after the war. Masha (Vasilisa Perelygina), is an extraordinarily tall woman, hence her nickname, Beanpole—although Balagov also explained during his meeting with the press that “beanpole” in Russian also points to internal clumsiness, i.e., someone who doesn’t handle her emotions well. In Masha’s case, she is an ex-soldier and, as a result, is suffering from post-traumatic stress disorder. Her illness complicates her role as caretaker to a little boy, and tragedy ensues. When the boy’s mother— who is also Masha’s closest friend, Iya (Viktoria Miroshnichenko)—returns from the frontlines, the two are immediately locked in a dangerous psychological battle: In Iya’s crude and desperate accounting, Masha owes her a baby. This story takes place against the bleak background of the hospital in which the two women work, tending to the emotionally frail, physically maimed soldiers, many of whom long for death.

Beanpole screens on October 6 and 8 as part of the New York Film Festival. Film Comment caught up with Balagov in Cannes after the film’s premiere.

Beanpole is loosely based on the book of the Nobel Prize winner Svetlana Alexievich, an oral history writer. How did her work inspire you?

I personally felt that it was very important to show a woman’s fate immediately after the World War II, which Alexievich does in her book, because Russian cinema doesn’t reflect on this theme at all.

Yes, contemporary, since in the past films such as Wings by [Soviet filmmaker] Larisa Shepitko were exactly about that. Most films being made about the war today, however, are patriotic, nationalist films. But it seems to me that if we want to somehow avoid repeating the same tragedy we should show a more truthful experience and not simply tales of bravery.

Did any other war films inspire you?

I actually tried to avoid watching other films about the war immediately before or while filming, since I didn’t want to repeat anything. But, of course, during my student years I did watch Aleksei German, Larisa Shepitko, Elem Klimov—so they did influence me.

Alexievich’s books are very polyphonic. I wonder how you narrowed her book down to the story of two young women.

My main inspiration from the book was one woman who was a gunner on an anti-aircraft gun, and who wasn’t able to have children due to physical injury. Basically as a gunner she was sitting on the gun and her pelvic bones got compressed. I found her story very interesting and used it as a starting point.

But then somewhere on page twenty of my screenplay, we [with co-writer Aleksandr Terekhov] realized it was a dead end. We then added another woman and expanded the story, to achieve a narrative that is a bit more multi-layered. 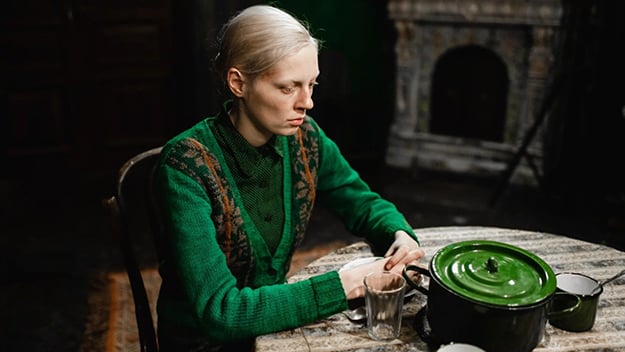 The film has a very striking look. What concepts did you discuss with your cinematographer, Kseniya Sereda?

Our main concept was all about color. It is a common stereotype that the films about war should be mainly black and white. That’s why we decided to re-introduce color back to this period. While reading war diaries and looking at pictures from the period we realized that people sometimes used color—having things be colorful—as a defense mechanism against the war.

It seems to me that in the film color gestures at both life and death. The red is very lively, but the rest of the picture is ochre.

Precisely. The green that we use is also about being alive, but the ocher symbolizes the wound. And red is also the color of rust and blood.

Your film may seem at times bleak and claustrophobic, but I find that it’s also very much a film about compassion.

When I work on the script I don’t think in terms of my characters being bad or good, or bleak, but I rather try to find what motivates them, how they operate.

Speaking of badness, there are no evil characters, per say. Wouldn’t you say? Though there is obsession. Emotional control.

The two women feed off of each other.

And is that evil?

You used a handheld camera, though it doesn’t necessarily show much—it’s very controlled.

We used handheld, because we wanted to create the idea of breath, meaning to give you the sensation of being extremely close to the characters, almost as it breathing with them. The only static take is the dinner scene at the end. For the rest, we tried to stay as close as possible to the characters.

And did you use filters?

That’s a bit of a craft secret. (laughs) Your two first-time actresses, Viktoria Miroshnichenko and Vasilisa Perelygina, are remarkable. How much room did you give them to experiment—for example, did they improvise?

I’m not against improvising certain scenes if they are compatible with the character, but my greatest preoccupation is for the actors to forget that they’re acting, and to find something fresh, to truly give something [of themselves] to the characters. I believe that we’re not inventing anything new in the film, but that instead we draw on our own personal past, our experiences.

But you did do extensive pre-shooting?

For the purposes of the final visual look, and to get the actresses used to interacting with the camera, but never to the point of becoming mechanical.

Could you comment on the importance of stillness in Beanpole? It’s very different from your previous film, in which the camera was more dynamic.

I realized that stillness was what my film new really needed. I think this way I could better reflect the internal space of the character.

And that’s precisely what also happens with the camera. Ideally, you’d have the feeling that sometimes there is space for the camera to breathe more, but other times it freezes completely. This way, content dictates the form.

What’s next in store for you?

I don’t have very defined project yet, but I think I’d like to try animation.

Ela Bittencourt works as a critic and curator in the U.S. and Brazil and consults for a number of international film festivals. She also runs the film site, Lyssaria. News to Me: Week of April 9

By Devika Girish
On the road again: Agnès Varda plans her next project (and plans for the future), Jafar Panahi speaks, and more By Devika Girish
Heroes of our time: the director of Closeness discusses expressing his culture and developing a distinct visual style News to Me: Week of April 9

By Devika Girish
On the road again: Agnès Varda plans her next project (and plans for the future), Jafar Panahi speaks, and more
Subscribe to the Magazine

By Devika Girish
Heroes of our time: the director of Closeness discusses expressing his culture and developing a distinct visual style