This article appeared in the February 10, 2022 edition of The Film Comment Letter, our free weekly newsletter featuring original film criticism and writing. Sign up for the Letter here. The origins of the Jackass project are the stuff of legend: director Jeff Tremaine and co-creator Johnny Knoxville’s editorial scheming at the willfully sophomoric Big Brother skateboarding magazine in the late 1990s eventually bore fruit in an anarchic MTV comedy-stunt series that ran for three seasons starting in 2000. Feature films followed in 2002, 2006, 2010, and 2013, which were in turn supplemented with various direct-to-video spin-offs—all devoted to the hijinks of mastermind/master of ceremonies Knoxville and his pals, a loving and beloved ensemble of rebellious overgrown kids misbehaving for their own amusement. Watching Jackass Forever, the newest installment of the wildly successful franchise, I was reminded of Before Midnight, the third and final (for now) volume of Richard Linklater’s decades-spanning trilogy. Crucially, Knoxville and his crew have replaced the romantic epic at the center of those films with an equally powerful platonic one: a homosocial love story about growing older alongside a group of friends who manifestly adore one another’s company, and who keep coming back for more.

Setting aside the imperative logic of the box office (in Jackass Forever’s opening weekend, North American ticket sales more than doubled its $10 million production budget): what is it about the Jackass phenomenon that continues to satisfy so magnificently and specifically, when most other Hollywood franchises face diminishing creative returns after one or two outings? The accrual of new installments is certainly of a piece with Tremaine and Knoxville’s original impetus, in the sense that their guiding ethos has always been more: one-upmanship, but also humor in repetition, with an endless drive to keep the joke going. In this light, the outrageous set pieces that provide the dramatic framework for Jackass Forever—coaxing bees to swarm a man’s penis, rigging up an acrobatic three-person “Triple Wedgie” apparatus—are simply variations on an already well-elaborated theme.

Of course, since there’s no imposed narrative through line that needs to be sustained, there’s also no need to stray from the basic formal tenets that describe every iteration of the Jackass formula: a series of discrete gags in sequence, each introduced with a cheeky title and gently punctuated by a fade to black. There’s a musicality to this modular structure and pacing, which alternates between long-form, immersive, multi-part demonstrations of valor and palate-cleansing, blink-and-you’ll-miss-it pranks. The action moves along at a brisk clip, with cast members’ breathless commentary adding dimension and texture to each successive tableau of discomfort (“The Human Ramp”), fear (“The Silence of the Lambs,” filmed using night-vision technology), and physical injury (“The Quiet Game,” in which one member of the entourage is challenged not to emit a sound when the edge of a skateboard guillotine comes down on his shins). Within each segment, the filmmakers never fail to relish the aftermath of their exploits, taking care to contrast the effects of a given bit on its (often truly shaken) protagonist with the genuinely good-natured enthusiasm of his onlooking peers.

Since the franchise’s inception, critics have situated the Jackass films in the lineage of the early cinematic slapstick of Buster Keaton and the vaudeville tradition, but the real task of the series has always been to document actual bodily discomfort. In Jackass Forever, this function dovetails seamlessly with an ironic reflection on the banal indignities of middle age. The camera and dialogue dwell on the protagonists’ visible signs of aging, tacitly contrasting these with the younger visages of several new supporting castmates. The graying hair and weather-beaten complexions of Knoxville, Steve-O, and the others raise the narrative stakes, introducing a stark reminder of the men’s mortality that was missing from their earlier exploits, and hinting that the effects of this rough-and-tumble lifestyle are felt more acutely now than ever. As always, the Jackass boys don’t shy away from acknowledging the bruises, gashes, and more grievous injuries sustained in the filmmaking process. Importantly, this acknowledgment is never in service of a contrived punchline or at the expense of its subject. It’s always offered up after the fact, reverentially, with a lingering close-up of the wound and murmurs of sincere admiration from the victim’s awestruck comrades.

Persistence in the face of age is a stunt in its own right. Comedy has always been cumulative in these films—the more times we witness a joke, the funnier it becomes—and now the accumulation of time itself is front-of-mind. There’s a discrepancy that didn’t exist before, between what these individuals are doing (voluntarily taking an expertly aimed hockey puck to the testicles; taunting a bull from within his enclosure) and what their physical appearance tells us they should be doing, in terms of both corporeal risk and our more slippery understandings of psychological (im)maturity. With Jackass Forever, the entire project (seemingly indestructible young men subjecting themselves to outlandish exercises as a test of fortitude and willpower) is recontextualized as a spectacle of very tired bodies and the tireless spirits that animate them, taking themselves to the limit time and time again.

Madeline Whittle is Programming Assistant at Film at Lincoln Center and a freelance translator. Her film writing has appeared in Film Comment and The Brooklyn Rail. 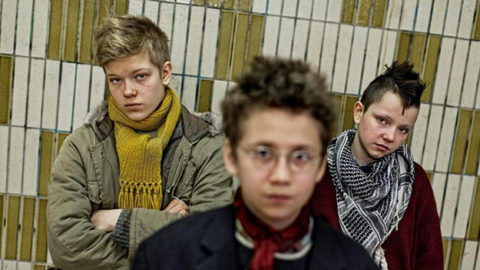 By Nick Pinkerton
We Are the Best! and a mosh down memory lane with punk and punks in cinema

By Nick Pinkerton
We Are the Best! and a mosh down memory lane with punk and punks in cinema
Subscribe to the Magazine