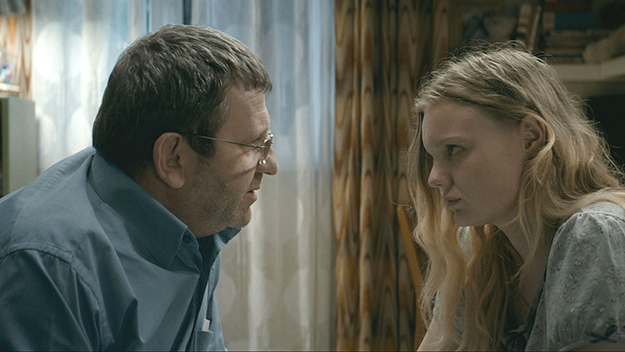 It’s tempting to call Cristian Mungiu’s Graduation a nightmare vision of a small Transylvanian town, but what’s truly haunting about the movie is how casually almost everyone in it accedes to corruption and pettiness. Graduation hinges on an awful coincidence during a momentous time in a teenager’s life. A day before she starts taking a set of exams that should clinch her scholarship to Cambridge University, Eliza Aldea (Maria Dragus) falls victim to a brutal assault—an attempted rape that leaves her head bruised and one arm in a cast.

Her librarian mother, Magda (Lis Bugnar), and more so her father, Romeo (Adrian Titieni), a surgeon at the local hospital, have made getting Eliza out of Romania a primary goal. (They had gone abroad themselves when they were young and returned two years after the Romanian Revolution of 1989, hoping in vain that they could do their bit to revive their homeland.) Romeo has tried to guarantee his daughter a better life. But he can’t wheedle a medical extension for his wounded, traumatized girl from the academic authorities. He must even argue for her right to wear a cast while taking the tests, since the administration fears that casts could be used to smuggle answers into the exam room. Ultimately, Romeo decides to go against everything he’s taught Eliza about integrity and morality. He asks an ailing bureaucrat who needs a liver transplant to use his influence to inflate Eliza’s exam scores after she scores an 8 instead of the 9 she needed on her first test.

Are we witnessing Romeo’s moral downfall? I don’t think so. He acts and talks like a man who grew cynical long ago. He alludes to miserable choices he and his wife made to survive in their town and country. His marriage had been doomed before this episode, perhaps even before Romeo began a serious affair. The movie is about the tragic loss of his belief that he can protect his daughter from injury and compromise. It’s also about Eliza’s disillusionment with the rectitude of her father. Father and child do graduate into an adult appreciation of each other. They achieve an understated rapprochement. But it comes after a jolting series of scrapes and crises, and Mungiu offers no assurance that it will last or that Eliza will secure a brighter future. The movie is devastatingly specific about a society that runs on favors exchanged by men of authority—and I do mean men. With hair-raising matter-of-factness, this film opens up a patriarchal, claustrophobic community in which all ethics are transactional. Pushing a patient to the front of a liver-transplant queue or manipulating an exam grade become precious bargaining tokens. When payoffs and trade-offs serve as conditions of everyday life, no feeling or thinking person can escape a creeping degradation that invades public spaces and private lives. Men like the local police chief talk about family and bedroom breakups as if they’re inevitable. This top cop confesses to Romeo that he suffered a mental collapse after his divorce.

Mungiu’s previous masterwork told the engrossing story of a thoughtless college student’s illegal abortion in 1987 Romania. He called it 4 Months, 3 Weeks and 2 Days. Mungiu could have called this movie Three Days and Eight Hours. Without a single gunshot, Mungiu makes suspense films that seize our attention with the highest stakes: the survival of the human spirit.

“Romeo” may be an odd choice of name for a stocky, emotionally muffled father wearing what used to be called “granny glasses.” But as a skillful surgeon—a figure of considerable authority in a one-hospital town—he has won the selfless allegiance of his nurse-assistant Csilla (Adrian Vancica) and the romantic devotion of Sandra (Malina Manovici), Eliza’s gifted, pretty 35-year-old English teacher. He operated on Sandra a year ago, after her car crashed on a bridge, and they’ve been lovers ever since. As a writer-director, Mungiu reveals these secrets with a skillfully disconcerting combination of leisure and abruptness. His deep-focus, long-take style draws us into Romeo’s world at the same time it exposes the psychological quirks of his behavior. Before we meet our protagonist, we see the run-down housing complex where he lives and the inside of his living room, with its evidence of culture (books, a painting) and of marital discord (the folded sheets on the sofa-bed where he’s been sleeping). After a rock smashes through a living-room window, Romeo hustles through the flat landscape filled with worn low-rise apartments, trying to catch sight of the culprit. It turns out to be the first of several property attacks Romeo endures without explanation. In a county where it’s easy to feel as if you’re being followed, and where a man may incur resentment just by doing his job honestly, Romeo can genuinely say he has no idea who could be targeting him. Mungiu sometimes seems to be viewing his story from the wrong end of the telescope, but his unconventional choices connect us intimately to the action. It unfolds from Romeo’s point of view, which Mungiu empathically and adroitly manages to put into perspective. Even a straightforward sequence of Romeo taking Eliza to school, filmed from inside the car, conveys Romeo’s spiritual distance from the ragged spectacle that comes in through his windshield. He divides his focus between the road and Eliza in his rear-view mirror; the classical opera on his car radio suggests his attempt to live in splendid isolation, at least outside the hospital.

Often Mungiu keeps the camera frame wide and open, whether taking in a dangerous construction site or a mysterious hillside police operation. In the most deceptively simple shot, Eliza answers questions about the attempted rape from a police interrogator in a crowded precinct office with her father beside her, while the chief listens behind her and behind him another cop is filing papers. As the latter debate whether they should step out of hearing range out of respect for Eliza’s dignity, our attention expands and contracts while the shot remains dense and still. Without being cripplingly self-conscious, this director keeps the audience conscious of what he’s leaving in and keeping out. They reflect his humane priorities as a writer-director. Romeo distrusts his daughter’s lover and motorcycle instructor, Marius (Rares Andrici), and suspects that he witnessed the attack on her. Mungiu focuses on the skepticism and resentment seeping from each of their faces. When they come to blows, Romeo sinks beneath the camera’s view. As he claws his way back up, he shrugs off the violence, and so does the film.

Mastering a movie equivalent of a detached first-person point of view, Mungiu unearths hidden depths in the supporting characters while creating a three-dimensional portrait of Romeo as a man who no longer lives in quiet desperation. Romeo has to summon a primal push to get through each day. Titieni, the stage trained actor who plays him, resembles a whirling coil of repression and resistance as Romeo chugs through his week: making his rounds at the hospital, hanging drapes and reviving the heart of his ailing mother, bringing groceries and impatience to his lover, preparing his own supper in the home where he and his wife have become strangers. Everyone wants something from Romeo. Eliza, in her innocence, demands that Romeo talk to Magda about Sandra (though Magda actually knows all about the affair) and try to make their family better. Magda orders him to get out of their apartment. Sandra pleads with him to get a speech therapist for her little boy. They all have good reasons for making their demands, and Romeo has grown too fond of seeing himself as the paterfamilias who handles matters his own way. He doesn’t tell his daughter that her grandmother is gravely ill because, he says, he’s “taking care of it.”

Mungiu’s sublime ensemble sweeps us up in the human constellation orbiting around Romeo. Bugnar imbues Magda with a ravaged, handsome presence as she says she’s willing to back her daughter’s preferences, even if it means passing up Cambridge and attending a Romanian college. Bugnar conjures doleful expressions laced with rage to convey Magda’s distrust for Romeo’s jaundiced world-view. Dragus’s Eliza combines unpredictable girlishness with budding adolescent rebellion. And with stubborn intelligence and pride, Manovici makes Sandra much more than “the other woman.” We admire her for standing up for her own worth and her son’s, even while Romeo is having the worst 80 hours of his life.

In an energetic collaboration with a host of other performers, Titieni makes us see how a hospital can be a haven for competence and decency. He refuses to accept his moral defeat. He tells a fellow doctor that he’s rooting for state investigators to uproot fraud and misconduct, even after they start investigating him. Romeo hopes that younger generations will succeed where his failed at creating a just society. He compels the investigators to spare Eliza from condemnation and he vows not to run away from them. They will always find him doing his job as best he can at the hospital.

For Romeo, relegating life-or-death issues to the level of bartering leads to the death of hope. His plight may now speak more directly to politically shell-shocked audiences in the West than it did a year ago, when Mungiu won his best director award at Cannes (the movie went on to play at the Telluride, Toronto, and New York festivals). What makes Romeo despondent about his country is that, in the end, everyone has to accept its degrading status quo. It’s what we’ve all taken to call “normalization.” Article from the Winter 1964 issue Article from the Winter 1964 issue

By Robert Gardner
From the Winter 1964 issue: Robert Gardner writes about his landmark documentary, Dead Birds
Subscribe to the Magazine