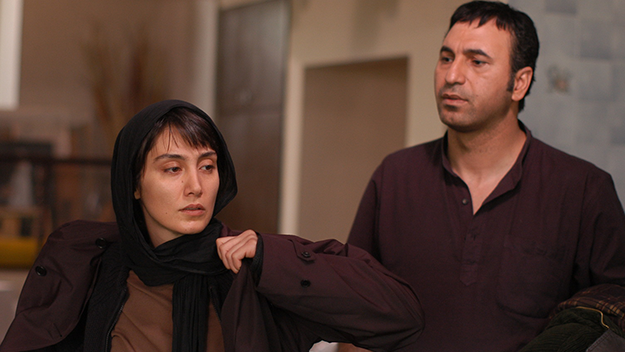 Film Forum and distributor Grasshopper Film have timed the American theatrical premiere of Asghar Farhadi’s 2006 film Fireworks Wednesday for the raucous title holiday, observed with public merrymaking and pyrotechnics on the Wednesday before the Persian New Year. The movie itself is cause enough for celebration. It’s a masterpiece of Farhadi’s psychologically charged scene-making and sensuous, insinuating style, and it’s a milestone of what I call keyhole cinema. Director Richard Rush once told me that the secret to the greatness of The Stunt Man was his decision to have “the title character peeking through a keyhole and getting a very partial view of the truth. Like all the rest of us, he makes up his version of the truth as he goes along. He invents enemies to test his strength and gods to protect him from the enemies.” It might seem odd to use a kaleidoscopic action film like The Stunt Man to elucidate an Iranian relationship movie like Fireworks Wednesday. But Farhadi, who won a Best Foreign Language Film Oscar in 2011 for his magnificent A Separation, has always been remarkable for conjuring escalating suspense and passionate, prismatic drama from mundane materials.

The premise of Fireworks Wednesday suggests soap opera. Sent on a day job from her temp agency, a clear-eyed young cleaning lady from the rural fringes of Tehran becomes enmeshed in the marital crisis of an upper-middle-class couple. But these people are more urgently compelling and unpredictable than they sound in a blunt description of the narrative. As the couple’s maid-for-a-day, Rouhi (Taraneh Alidousti), tries to comprehend the rifts in an unhappy marriage, she surprises the audience with her naïveté as well as her shrewdness. It’s an unexpected pleasure to see a salt-of-the-earth character depicted as alternately on target and off base rather than rock-solid. Rouhi is our surrogate for the first half of the movie because she’s an outsider, and also because, unlike the others, she’s immediately and emotionally accessible and spontaneously responsive to whatever is going on around her.

Ten days away from her own wedding to a man she truly loves (and who loves her), Rouhi is as certain of her own feelings as she is uncertain about the complications of Morteza (Hamid Farokh-Nejad) and Mojdeh (Hedieh Tehrani) and their young son Amir Ali (Matin Heydarnia). In the course of a busy and confusing day, Rouhi constructs her version of their truth from overheard conversations and glimpses through semi-closed doors. As she seeks gods and enemies to make sense of this emotional maelstrom, her allegiances shift between Morteza, who presents himself as a traditional breadwinner and works at a modern job (he’s called away to consult on a video set for a New Year’s Eve broadcast), and Mojdeh, who is fragile, anxious, and high-strung—an Iranian woman on the verge of a nervous breakdown. Rouhi’s love match frames the movie—her fiancé drives her to the agency on her motorcycle in the morning, then waits hours to drive her home, well into the night. But she doesn’t govern our perceptions from beginning to end. Farhadi navigates several shifts in perspective with stunning wisdom and assurance, enabling us to see reality through Mojdeh’s and Morteza’s keyhole views. Our investment in Rouhi and this volatile couple intensifies as the movie goes on. Against the backdrop of male rowdies igniting firecrackers, moments of emotional and physical brutality increase and multiply. (The aura of masculine bullying makes the holiday less joyous than oppressive.) We wonder whether this marriage can be saved, then whether it deserves to be saved. We also hope that Rouhi’s eagerness to become a wife has not been tainted or diminished.

Farhadi wisely injects his domestic spats with beat-the-clock tensions that compress and tauten the action. Morteza is desperate to get his household in order before he takes his family to Dubai for a vacation the next day. Mojdeh threatens to stay home and even to grab their son and abandon Morteza if he leaves the apartment for work without discussing the state of their union. Morteza hired Rouhi to clean up after a repainting and an argument the night before that left his right hand bandaged and glass littering the floor; he’d punched out a window in anger at Mojdeh.

Mojdeh does seem like a handful: she looks troubled and acts entitled. She’s high-handed with the glazier who comes to fix her window and accuses him of overcharging. While the glazier does his work she also, weirdly, darts into her husband’s wardrobe after hearing a phone ring beyond the wall. Then she rushes to the bathroom, stands on the side of the tub and puts her ear to an air-vent. A neighbor refers to her as “that psycho.” Early on, Rouhi would probably agree. But when Mojdeh asks her to make a beauty appointment with Simin (Pantea Bahram), the attractive divorcee who runs a salon in the apartment next door, Rouhi gets caught up in the pleasures of conspiracy. Mojdeh confides in her sister (Sahar Dolatshahi) that she thinks Morteza and Simin are having an affair. But are they? After Simin shapes her eyebrows and doesn’t make her pay, Rouhi comes to think that Simin is a victim of malicious gossip from tenants who think her salon is too déclassé for their building. Farhadi imbues each character with hidden dimensions and makes the process of uncovering them engulfing and cathartic. Is there such a thing as “heartbreaking delight”? I think there is, and Fireworks Wednesday achieves and maybe even defines it. There’s no happy ending on the horizon, but every detail is rapturously observed, and each twist in the story contains an emotional payoff. Farhadi is aided and abetted by actors who make each moment striking and veracious while containing multitudes of questions. With his ability to suggest primal force and dogged intelligence, Farokh-Nejad provokes us to analyze our responses to Morteza at any turn. Is he merely a stubborn workaholic, maddened by his own limitations and his inability to soothe or satisfy his wife? Or is there a buried fuse to his explosions? He tells Mojdeh that her craziness drove him to smash the window. It could be the exasperated cry of a sane man at the end of his tether, or the default argument of a potential abuser.

Morteza calls Mojdeh “neurotic”—and she might be neurotic, or worse. She could be a delicate soul whose nerves have frayed. Her brother-in-law has stopped talking to her. Her sister criticizes her for not visiting the salon for a beauty treatment herself, then utters one of those ominous “you were doing so much better” statements usually delivered to a mentally unstable person facing setbacks. But Mojdeh has reasons for everything, including her haut-bourgeois displays of haughtiness. Why shouldn’t Mojdeh expect the concierge’s wife to help with the housecleaning if she’s already assisting another neighbor with shopping? The woman who calls Mojdeh a psycho has a habit of parking her car so that it intrudes into the building’s driveway; any city-dweller knows how annoying that can be. It’s just the sort of daily harassment that could ratchet up the stress of a sensitive person who spends too much time staring out the window.

Tehrani gives the performance of the movie as a woman who is drowning in suspiciousness and grief. Farhadi pitches this woman sky-high, but Tehrani climbs right into the role and modulates her anger and distress. With little more than a trembling cheek or upturned nose, Tehrani captures Mojdeh’s ability to pick up sensory signals and construe them as evidence of Morteza’s sins. It’s a brilliant performance, and a moving one, too. Alidousti played Elly in Farhadi’s mesmerizing Big-Chill-gone-wrong movie, About Elly (09), and she’s perfect as Rouhi, who is only superficially simple. At ease bantering with her fiancé or with other workers at her agency, Rouhi bravely steers through an affluent milieu that’s worldlier and less devout than her own. During the most fraught domestic scenes, Alidousti acts like an emotional seismograph, registering psychic temblors in her face. She wears the billowing, black, body-encasing cloth of the traditional chador—and in a tragic moment tinged with black comedy, Mojdeh borrows it to use as a disguise. Outdoors, even on the balcony, this performer is superb at conveying how exposed Rouhi feels without her chador and how acutely she responds to the crudeness of a gawking or taunting boy. But she also gives the movie its moments of undiluted joy. Her ecstasy is blissful for the audience when her fiancé tells her she’s even more beautiful with her eyebrows sculpted.

In the crucial supporting performance, Bahram brings a sexy kind of dignity to Simin, a talented, independent woman. She is so smart and composed that you’re shocked when two young men on a motorcycle toss firecrackers near her feet and succeed in upsetting her. She’s at risk in the man’s world of the Iranian streets; indoors, she can be modern. When Simin sparks her cigarette lighter, it plays Richard Rodgers’s “Carousel Waltz.” Farhadi visualizes the intersection of American and Iranian popular culture in fascinating ways. Mojdeh has decorated Amir Ali’s bedroom with American cartoon figures, including a giant Donald Duck. The movie contains suggestions that Mojdeh wants to move to Dubai permanently, for the boy’s sake. She resents the school that scars his childhood with its teachings about hell.

Farhadi’s filmmaking, too, carries intriguing echoes of the West. When Rouhi’s chador gets caught in the rear wheel of a motorcycle, it’s like a benign, comical version of Isadora Duncan’s shawl getting caught in the rear wheel of an automobile and dragging her to her death. Tehrani’s Mojdeh listens with such aching vehemence for chatter from another apartment that she brings to mind Jean Marais’s poet straining to hear messages from the underworld in Cocteau’s Orpheus. But Farhadi and his co-writer, Mani Haghighi, and his cinematographer, Hossein Jafaria, and editor, Hayedeh Safiyari, achieve a flickering intensity and fierce, liquid movement all their own. This intimate movie has a grander sense of scope than most blockbusters. That’s because Farhadi and his team pack each shot with incident and shoot and edit it so that one moment you feel inside the action, and the next you feel outside of it, reeling from the impact and figuring out what just happened. Farhadi, like most directors of his caliber, has an ultra-observant eye and a keen spatial sense. You understand in minutes that the mess of Mojdeh and Morteza’s apartment parallels the wreckage of their life together, and the metaphor is real and vivid, never forced. Few directors could have created such an enveloping sense of lives nested within other lives as Farhadi does by paying attention to doors, windows, gates, fences, and the texture of decorative glass inside Simin’s apartment.

Farhadi has a terrific sense of touch. He knows how to use visual and dramatic means to make a milieu palpable to an audience. In a gorgeous opening credit shot, Rouhi sticks her hand out from the crack in a window as a bus carries her to her job. That hand and a piece of her shawl are all we see of her; they create a butterfly pattern with their reflection in the window. Rouhi doesn’t merely exult in the air rushing through her digits—she explores the window’s outside handle and its rubber lining. You get the sense of a girl feeling her way through life. It provides a sensuous introduction to the complex blend of emotion and scrutiny that permeates this film. Feel and think your way through Fireworks Wednesday and it will never leave you. 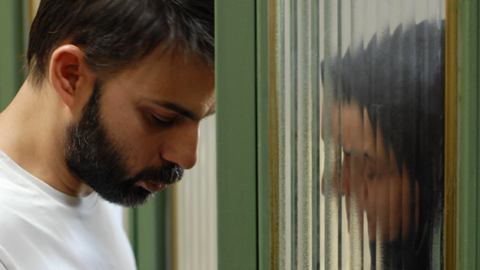