Somewhere on the road to Kansas City, riding in a van crammed with teenagers and thumping with hip-hop, I began to reflect on my countrymen. Well, it didn’t go quite like that, but travelogue is one important part of Andrea Arnold’s American Honey, which uses the van as a primary setting. Its passengers are a ragtag sales team hawking magazine subs, led by a chief seller (Shia LaBeouf) and overseer (Riley Keough). Arnold, a British director better known for her forays on her home turf, turns their perpetual road trip into a training ground for her adventurous protagonist, new recruit Star (Sasha Lane). We look at stretches of country from Kansas up to the Dakotas through Star’s perspective—yet palpably filtered through Arnold’s own hungry eyes, a perspective encouraged by the production’s adherence to low-budget travel during shooting. Rather than a coming-of-age tale, what we experience is something closer to a roving foreign correspondent’s viewpoint of America, as Star throws herself pell-mell into often dangerous situations for the love of seeing what’ll happen. 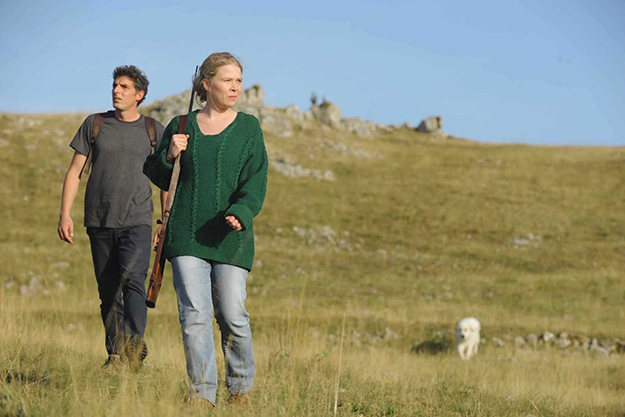 As Arnold collects people along the way—a quartet of identically addressed Cadillac cowboys, oil-rig workers, neglected kids of a meth addict—there’s a sense of curiosity and compassion about America (including the enthusiastic round of city-state introductions the teens give to each new arrival). Also showing at Cannes, Alain Guiraudie’s Staying Vertical does Arnold one better by featuring an actual traveling filmmaker as its main character, Leo (Damien Bonnard). Leo is soon waylaid after having a baby with a shepherdess, but while Guiraudie employs a gentle pastoral absurdism, the movie shows an evident affection for its stubborn backroads oddballs (not to mention the director’s fervent belief in the healthy polymorphic libido of the provinces). Another French filmmaker in Competition, Bruno Dumont, often cites a fondness for his customary setting of Brittany when discussing his films. But some added layer of perversity is at work in Slack Bay, an openly ridiculous story of early-20th-century gussied-up bourgeois ninnies encountering the savagery of fisherfolk. With Juliette Binoche and Fabrice Luchini acting like out-of-control animatronic dummies, alongside the usual Dumont gallery of nonprofessionals, it’s as if the filmmaker wants to show, after Li’l Quinquin, that he has an appreciation for the bizarre that extends across all classes. The above films showed in Competition, but in Critics’ Week, the Turkish film Album offered its own heightened portrait of a people. In his diligently stylized debut feature, Mehmet Can Mertoglu follows a middle-class urban couple who furtively adopt a child and go through the often uncouth paces of their lives. Mertoglu frequently uses deep staging and square framing that tend to keep the couple, and the friends and cops they encounter, at a certain comic, even cartoonish distance; sharply defined sound pops out of the screen whenever they laugh or bicker or slurp up food. Not that there’s anything wrong with that necessarily, but when I had a chance to talk to the filmmaker, I asked whether he felt he was edging into parody. “I think it’s a pretty naturalistic, pretty realistic portrayal of the people in Turkey,” Mertoglu said in his interview, while also averring that he’s a “big fan” of Roy Andersson. The couple appear to be caring parents, despite their foibles, yet he maintains a distance from his creations: “I’m not a big fan of them, but I can’t say I don’t like them. I feel no sympathy, but I feel no hatred or repulsion for those characters. It’s a result of how they’ve been brought up. It’s how they are.” That last sentence has been the response of many filmmakers asked about the line between portrait and caricature of class and national identity, and as ever, Cannes features examples that are all over the map. By Amy Taubin
Parental guidance suggested: on Maren Ade's screwball comedy Toni Erdmann, which achieves true greatness—and then some
Subscribe to the Magazine