By Irina Leimbacher in the May-June 2010 Issue

The Oath is a film about two men associated with al-Qaeda and Osama bin Laden: Salim Hamdan, a driver for bin Laden, and Nasser al-Bahri, one of bin Laden’s bodyguards. Hamdan is the better-known figure to the moviegoing and newspaper-reading public in the U.S.: picked up in Afghanistan in 2001 and imprisoned in Guantánamo for almost six years, he was the plaintiff in Hamdan v. Rumsfeld, the 2006 Supreme Court case that decided that the Bush administration’s prosecution of “enemy combatants” by military commission violated the Geneva Conventions. In spite of his Supreme Court victory, Hamdan was subsequently tried and sentenced for providing “material support” to a terrorist organization. In January 2009, having served the remainder of his sentence, he was released and returned to his native Yemen.

Nasser al-Bahri, aka Abu Jandal, is less well-known in the United States, and Laura Poitras paints a complex and elegantly constructed portrait of this self- proclaimed jihadi in her new film. While Hamdan is depicted only through his letters to al-Bahri (who, we learn, is his brother-in-law) and the comments of his military lawyers, al-Bahri is filmed in the midst of his daily life in Sana’a, Yemen, where he was released from prison after participating in “The Dialogue Committee,” a program that reintegrates former jihadis into civil society. We see him tenderly engaging with his son, having lively discussions with men interested in learning more about jihad, doing his morning ablutions and prayers, driving his cab and negotiating rates (filmed by an unmanned camera), and discussing his experiences and commitment to al-Qaeda with media from both the Western (60 Minutes and The New York Times) and the Arabic world. Baby pictures of his son surrounded by grenades, a heated defense of the 9/11 attacks as a metaphorical “slap in the face,” regret at having recruited Hamdan to jihad, an apology for the deaths of U.S. civilians, claims that he no longer actively advocates violence, and his reputation as a cooperative informant to the FBI are all part of this riveting, complicated picture. Al-Bahri is charismatic, contradictory, and complex, and he is not afraid to admit it. And Poitras isn’t afraid to show it either.

Poitras’s film gives significant screen time to al-Bahri, and in so doing it sheds light on the complex meanings jihad might have for a young Muslim man. But The Oath is equally about U.S. strategies in its post–9/11 “War on Terror” and about belief systems and the ambiguities of loyalty, the law, and language. In following Hamdan’s case from Guantánamo (where she was only allowed to film the outdoor spaces and public press conferences in striking contrast to the intimate access of her Yemen footage), Poitras raises the question of what is meant and permitted by the various interpretations of the “war on terror.” While Hamdan came to represent the transgressions and failures of Bush-era policy, the example of al-Bahri, ironically, was used to prove to the U.S. Senate Judiciary Committee that legal interrogation techniques (as opposed to the “enhanced interrogation techniques” that are sometimes called torture) actually work. Poitras includes footage of the testimony of FBI agent Ali Soufan who questioned al-Bahri for 15 days and got enormous amounts of “actionable intelligence.” Soufan’s Senate testimony is given in the context of his condemnation of U.S. noncompliance with the Geneva Conventions, and Poitras includes his statement that he is taking a public stand against current U.S. practices precisely because he “took an oath swearing to protect this great nation.”

The oath of the film’s title, however, is a different one—the oath of loyalty to al-Qaeda, made by al-Bahri but not by Hamdan. Poitras takes on the very notion of pledging an oath and what it means for a thinking, constantly transforming individual to swear loyalty to an idea or an institution that itself undergoes ideological shifts depending on political context. She shows that an organization (including the U.S. military), a nation and its constitution, wars of jihad and “on terror,” or individuals cannot and should not be reduced to labels. Compelling, emotionally and intellectually complex, The Oath is an important film that raises questions we must all ask if we want our world to be something more than a simplistic, dangerous, and violent web of Manichean binaries. 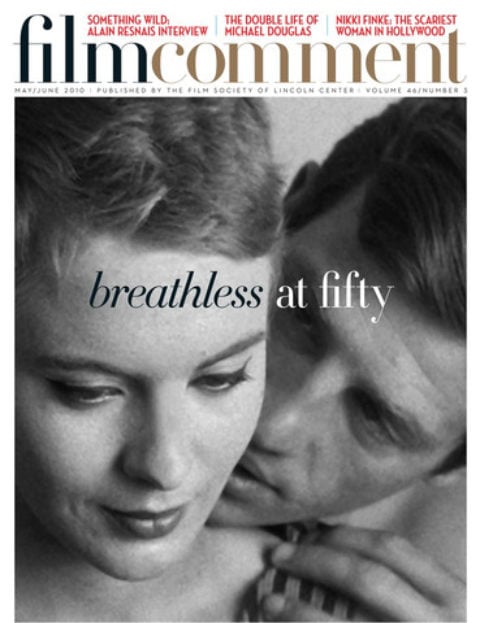 From the May-June 2010 Issue
Also in this issue
The Most Powerful Woman (Make that Person) in Hollywood By Roger Smith
A Tale of Two Cities By Chris Fujiwara
The Perils of Polanski By Andrew Sarris
Subscribe to the magazine
Categories: Reviews