I love a freak show, especially when the banner art features Val Kilmer as the Illustrated Man. Step right up and see the Kennedy assassination re-enacted with pigeons, complete with bird-sized pink pillbox hat! Hear the sensational recipe for human brains with scrambled eggs! Ponder the portentous symbolism of the terminal saline lake! Dare to experience Vincent D’Onofrio as the incredible Pooh Bear, a bundle of actorly mannerisms with no nose and a yen to feed Kilmer’s privates to a rabid badger! I surrendered to every lurid moment, and for my penance I will watch Wavelength until its subtle ambiguities cleanse my soul. —Maitland McDonagh With a penchant for midriffs to rival the producers of the Mary-Kate and Ashley Olsen oeuvre, John Stockwell has his finger squarely on the · pulse · of today’s young American woman. Four tough, hot surfing chicks live in a bungalow on the beach in Hawaii. They work—sort of. They wear clothes that can untie really, really easily. With surfing sequences like this, “message”—if you follow your dreams, you can still get with the hunky football player — is immaterial. A guilty pleasure both for myself and for the group of guys in the front row at the all-media screening who looked like they’d staked out their seats in, like, 1993. —Alice Lovejoy And Now. . . Ladies and Gentlemen

Claude Lelouch continues to be a law unto himself—(Euro)trashy on an archaically grandiose scale, he’s French cinema’s own Harold Robbins, with a metaphysical spin. His latest has to be seen to be believed — Jeremy Irons as an international gentleman jewel thief, yachtsman, and master of disguise, falling for Patricia Kaas’s amnesiac lounge singer, both of them in Morocco to forget (what else?). Bespangled with only the most tasteful product placement, this glittering rhinestone of a movie offers two contenders for the year’s most unforgettable line: “The despair of the jet set is unfathomable” and “A yacht is like a beautiful woman.” — Jonathan Romney Matt Damon plays Terminator 2 minus the muscles, accent, or fatherly instincts. But unlike Arnold, his Cyber-wood vehicle embodies not “Star” but “Studio,” an ostensibly blank slate spouting several foreign languages, an unthinking knowledge of music-video beats and martial arts, with a Swiss bank account implanted near its crotch. To survive, it must dodge incoming corporate flak from a conspiratorial network whose only ideology is self-perpetuation. Memo to Doug Liman: Go! Back. —Paul Arthur Abysmally boring (and don’t get me started about its politics), but besides a judicious amount of enjoyable faux-combat-naturalism-guignol, there’s one moment so utterly bizarre it makes it all worthwhile. Dig this: Vietnamese landscape in the mist, a Scotsman on the soundtrack singing something about leen-him-doon-an-tha-groond-ware-hay-stoond, and a ragged bunch of all-Americans storming in slow motion out of the mist and into forever, as if possessed by the spirits of the four musketeers…. Boy, that Randall Wallace is really something, always managing to find the spirit of his fain ancestors in the least likely places. —Olaf Möller Favorite ad copy of the year? “A Zero Will Rise.” DJ Qualls, that supreme bundle of cartoon energy, makes the move from über-geek to heroin chic in a film with support and cameos that will boggle your taste-o-meter: Eliza Dushku, Zooey Deschanel, and Lyle Lovett, feature prominently. But keep your eyes peeled for Illeana Douglas, Gene Simmons, Kool Moe Dee, Henry Rollins, Tommy Lee, and, gasp, Satan himself, David Hasselhoff. You could argue this takes teen comedy to the next level. But in some circles, saying anything is better than the now-classic Road Trip (also starring Qualls) will get your lights punched out. — Chris Chang The incandescent Ryan Gosling heats up this cold rich-kids-who-kill film, as does the billed star, Sandra Bullock. Watch her boozily neurotic Miss Un-Congeniality kick pretty fellow cop Ben Chaplin out of bed after she’s had her way with him. Sure, it’s Leopold and Loeb Lite, but it’s also deliciously Schroeder-ian. There’s the Reversal of Fortuneöesque cultured but murderous teen obsessed with the perfect crime, the deep focus on luxurious homes and towns, the requisite unpleasant protagonist. Welcome to the WB Channel, Barbet. — Alissa Quart It’s possible that kids’ movies used to be just as bad as they are now and that we only think they were better, but I doubt it. This one, less choppy than the first, had real physical scope, a terrific imaginary New York, patient storytelling, a nice sense of humor, and the year’s weirdest movie reference: Stuart and his injured birdy girlfriend Margolo sit in his toy red roadster like two teenagers at a drive-in, looking up at a computer screen and watching …Vertigo! —Kent Jones Cronenbergian grotesquerie collides with afro-futuristic panache in Guillermo del Toro’s unhinged B-movie smackdown. Armed with daylight grenades and a monosyllabic vocabulary, Wesley Snipes teams up with the vampire nation to defang the mutant Reapers. Triple-cross betrayals and much unnecessary kung-fu excellence ensue. Overlord Eli Demaskinos gobbles on jello-gore and relaxes in a blood-jacuzzi, Eurotrash vampires snort blood-cocaine, the Bloodpack straps on like a Benetton ad from hell, and someone actually says,”You’re one cunt hair away from hillbilly heaven.” All this plus Cypress Hill flowing to Roni Size like it’s 1998. Trouble every day! —Nathan Lee In Praise of Love

Uncle Jean’s gorgeously soporific-sophist fake masterpiece really made guilt intrinsic to its pleasure: the strongest, most affecting passage in this funeral-home fugue stealthily borrows the ringing, high-flown last testament of Robert Brassilach (“As for my books and images/Let them be dispersed to the wind…”). You might not guess it from the oblique, “poetic” way Godard alludes to the writer, but Brassilach wasn’t some hero of the Resistance, but rather an infamous Nazi collaborator and anti-Semitic propagandist. Godard appears to find the aesthete Brassilach’s genuine crimes more forgivable than Spielberg’s imaginary ones—is this what JLG’s partisans mean when they praise him for being dialectical? — Howard Hampton 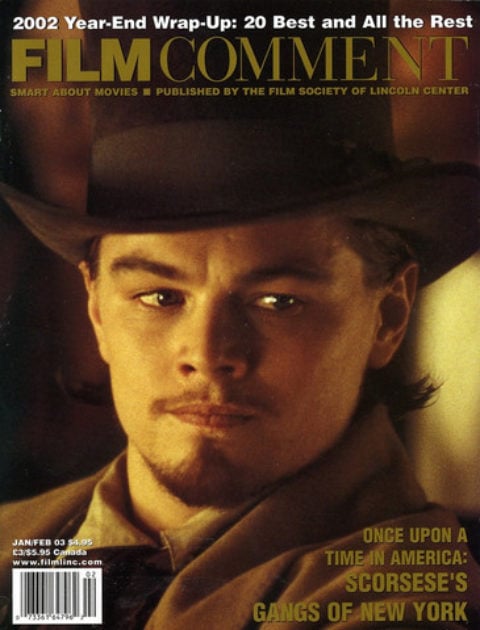 From the January-February 2003 Issue
Also in this issue
The Ethical Romantic By Bertrand Tavernier
Minority Report By Gary Indiana
Founding Fathers By Amy Taubin
Subscribe to the magazine
Categories: Year-End Critics’ Poll