By Amos Vogel in the May-June 1981 Issue

There are still people who feel that animation is inherently incapable of be­ing profound or cinematic. Such hoary sentiments are once again laid to rest with the appearance of Suzan Pitt's As­paragus, to which I wish to pay debted and fervent tribute. A winner of more than seven first prizes, and a selection of over eighteen international festivals, the work clearly represents a major achieve­ment of contemporary animated cin­ema. 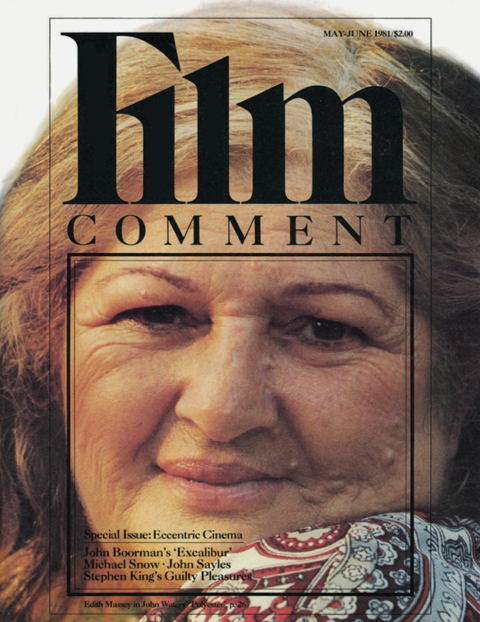 From the May-June 1981 Issue
Also in this issue
Independents: Stalking Asparagus By Amos Vogel
Subscribe to the magazine

There is the theater of dreams (seen in a wondrous, three-dimensional key se­quence of great poetic power, filled with transmogrifications, revelations, and il­lusions) to which she brings her bag of tricks, entering the action from back­stage, extending her abundances to the audience. There is the mask placed on top of her faceless face. There is the return to the garden and the sucking of the huge asparagus, life-giving source of art, exploding under the woman’s greedy caress into cascading stars, water­falls, and magical objects.

While the deliberate reductionism of this eerie “plot” breaks with conven­tional narrative codes and assumes an almost mythical character, the film­maker’s commanding comprehension of visual space and its manipulation are the most extraordinary aspect of this extraor­dinary work.

In her home, the protagonist peers into a table-top doll house; one of its rooms is revealed as a exact miniature replica of the room she is in; suddenly, we are swiftly hurtled into it by the cam­era until the tiny room fills the entire frame, thus becoming the “real room” of the film. Instantaneously, the action re­peats: the protagonist again peers into the “new” dollhouse, and she and we are again propelled into the identical miniature room within it, until it engulfs the entire visual field, creating yet an­other “real room”; rooms within rooms, universes within universes. The effect is unsettling and magical in the extreme.

In another breath-taking scene, the faceless woman pulls aside heavy wall drapes to reveal huge, floor-to-ceiling windows that transport her (and us) from the “real world” to the phantasmagorical universe of her imagination outside-a luxuriant jungle of monstrous asparagus stalks.

Other manipulative spatial disloca­tions involve cruel, diagonal wipes that instantaneously destroy one visual uni­verse for another; and the surreptitious inundation of the “theatre-within-film” audience by the marvelous trifles and multifarious trinkets of the artist­—chairs, snakes, abstractions—which impermissably and literally invade its space from beyond the proscenium to engulf their unconscious until the gift comes to an end and the artist, spent, returns home to the greedy renewal of her inspi­ration in her metaphorical garden.

The power of the film also derives from its mesmerizing, somber electronic score (by Richard Teitelbaum) and its compelling graphic style. It is the trans­lucent, hypnotic quality of the latter that is most difficult to analyze. The full eel animation is deliberately reductive, reminiscent of magic realism “naif”, with colors, outlines, and tones almost garish, paradoxically, in a subtle way. The story, the score, and the measured tempo evoke a haunting patina of sub­dued, barely contained “nostalgia” for a wished-for past that may never have ex­isted-the sadness of a very modern deja-vu of alienated dissociation.

Ironically, the erotic/scatological met­aphors employed so effectively both limit and make possible the film’s theat­rical distribution. Even if shorts were generally being shown in American cin­emas today, the Moral Majority, orga­nized or not, would obviously soon put an end to public exhibition of this work. Its straight-forward, hence graphic por­trayals of certain “unspeakable” human enterprises reconfirm, by their atten­dant shock effect, the continued exist­ence in our society of strong visual taboos, despite assertions of “freedom of the screen” and “liberation from inhibi­tions.” On the other hand, the film has found a steady niche as companion piece to the special midnight showings of David Lynch’s eerie masterpiece, Era­serhead. Since this is a regularly and widely shown cult film of the early Eighties, Asparagus is being seen more widely and indeed by a more receptive, more adventurous audience than would otherwise have been the case.

Ultimately, one realizes that one has been touched by a film of a scope and magical power not frequently encountered in animation (Jan Lenica comes to mind, George Griffin, Walerian Borowc­zyk, Harry Smith); and one welcomes, in awe, a major new talent. Ms. Pitts’ animated feature-now in production­-is eagerly anticipated.