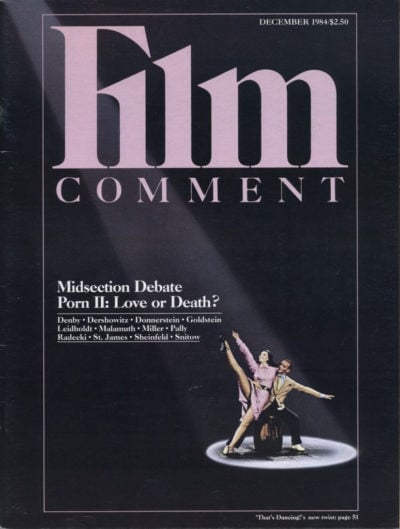 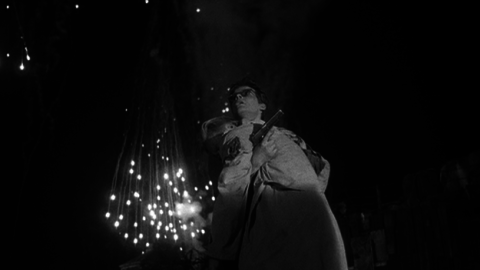 Black & White in Color
With blacks buying 20 percent of movie tickets sold in the U.S., how is it that there are so few black films, and fewer still that speak to the varieties of black experience? Armond White surveys the sorry history of Hollywood’s black films and finds hope in Prince’s Purple Rain. Carol Cooper has thoughts on the latest “serious” black movie, A Soldier’s Story, now a modest hit.

Midsection: Sex & Censorship
Stoked by feminists and fundamentalists, the battle rages on against images of sexual violence in films. In our last issue we published excerpts from the script for Body Double and an interview with director Brian De Palma. Now a dozen experts in film, politics, and the law debate the issue.

Hollywood Chairs
Call it Executive Sweep, or Mogular Chairs, or a Diller a Dollar: The hit-and-run game played by Hollywood’s studio bosses has never been so frenetic, or so closely monitored. Gregg Kilday has charted the movement of these New Tycoons at Paramount, 20th Century and Disney, and speculates on the effects the shuffle bodes for the costs and the future of movies.

Always Gonna Dance
Hollywood never sounded a more seductive siren call than Got-ta dance! Marcia Pally has the goods on three generations of dance movies and a new compilation called That’s Dancing! Ya-got-ta read! And in an interview with Ron Haver, Gene Kelly reflects on his 40 years as the all-American hoofer.

Journals
No local heroes in Scotland this year; Barbara Scharres went to Edinburgh and found the Japanese had landed. Mitch Tuchman and Charlie McDougal take us on a Disney jungle cruise in search of a baby dinosaur.

Andrzej Wajda
This film poet of Solidarity makes news the way other people make movies. The indomitable Pole talks with Dan Yakir about a turbulent career and his A Love in Germany.

Arthur C. Clarke
Before him, 2001 was just the first year on next century’s calendar. Will 2010 have the same metamovie impact? Joanna Lipari chats with the wizard writer via computer.