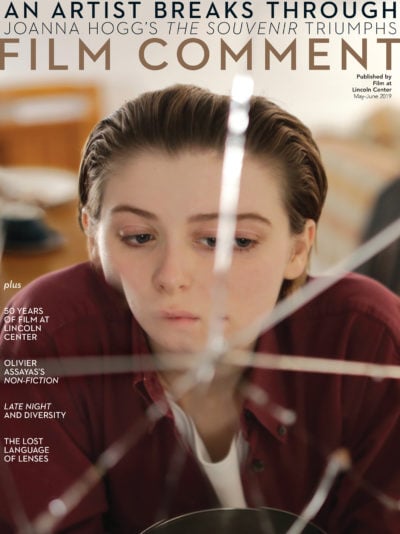 I Know Where I’m Going

By Sheila O'Malley
In Joanna Hogg's sublime breakout The Souvenir, a budding artist strives to stay true to her path despite a consuming romance By Kelley Conway
With deceptively casual genius, Agnès Varda journeyed deep into the truth of experience By Film Comment
To celebrate the 50th Anniversary of Film at Lincoln Center, we present a brief history via legendary intrepid programmer Amos Vogel

The Souvenir
By Sheila O’Malley
In Joanna Hogg’s exquisite breakout, a film student’s unsentimental education in 1980s England becomes a rigorous work of elusive psychological portraiture. Plus: an interview with Hogg by Nicolas Rapold

50 Years of Film at Lincoln Center
The world-famous film organization—and longtime publisher of this magazine—celebrates its golden anniversary and brand-new moniker this year. We reminisce with the words of subversive pioneer Amos Vogel and selections from series past by a handful of Film Comment contributors

Becoming Us: The Violence of Assimilation
By Soraya Nadia McDonald
Jordan Peele’s latest cultural touchstone, Us, plumbs the depths of the fractured American experience, but is there hope within its horrors?

Asako I & II
By Andrew Chan
Japan’s most excitingly unpredictable filmmaker, Ryusuke Hamaguchi, takes a left turn into pop melodrama with his shimmering tale of doubled love and folly

Cinema Optics
By Nick Pinkerton
Everything you see in a movie goes through and is transformed by the properties of the lens—that enduring analog hero of filmmaking, and perhaps its most woefully misunderstood component

THE PRE-SHOW | News, views, conversations, and other things to get worked up about
News, Inspired: Pedro Almodóvar on Pain and Glory, Release Me: Lucio Castro’s End of the Century by Jordan Cronk, Directions: Tsai Ming-liang by Jonathan Romney, Restoration Row: Márta Mészáros’s Adoption and The Two of Them by Max Nelson

ART AND CRAFT | Filmmaking according to the makers
Editor Galut Alarcón on Raúl Ruiz’s The Wandering Soap Opera, as told to Manu Yáñez Murillo

FINEST HOUR | One actor, one performance
David Essex in That’ll Be the Day by Christina Newland

THE BIG SCREEN | Reviews of notable new films opening in theaters (hopefully near you)
The Last Black Man in San Francisco by Stuart Klawans, Charlie Says by Madeline Whittle, Booksmart by Cassie da Costa, The Chambermaid by Lawrence Garcia, and more

READINGS | Books about all aspects of filmmaking and film culture
What Is Japanese Cinema?: A History by Inuhiko Yomota, reviewed by Kazu Watanabe; A Life in the Movies: Stories from 50 Years in Hollywood by Irwin Winkler, reviewed by Glenn Kenny; Picture by Lillian Ross, reviewed by Farran Smith Nehme