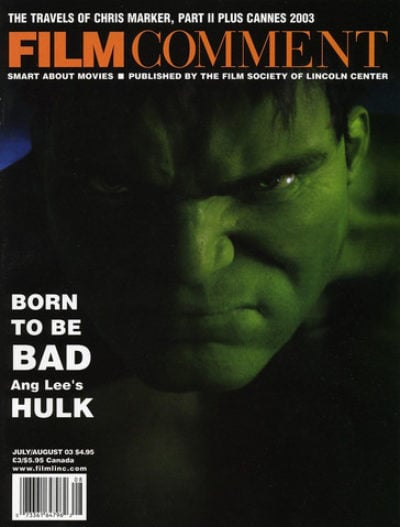 How can a fabrication replicate reality? Entire curricula have been devoted to untangling this conundrum-the battle between representation and its supposed “limits.” And Omer Fast, a young Israeli-born, Berlin-based video artist, provides an ingenious update to the…

BURNS FILM CENTER
By Harlan Jacobson
If you build it, they will come: two years at the movies in Pleasantville

CAMP
By Chris Norris
A coming-of-age teen flick with a difference. Forget J-Lo: these kids worship at Sondheim’s altar. Writer-director Todd Graff said, “Let’s put on a show,” and the result is one of the most delightful films of the season

AMERICAN SPLENDOR
By Howard Hampton
Received wisdom: the comedy of Everyday American Dysfunction found on HBO and in the films of Alexander Payne, Charlie Kaufman, et al., is today’s cutting edge. A new film about Cleveland’s cult comic-book writer/depressive misfit joins their ranks. But how much of this edge depends on dividing the audience into Those Who Get It and everybody else

HULK
By Geoffrey O’Brien
A franchise is born—and one with brainpower as well as muscle. The ever-versatile Ang Lee’s new Hulk may be the smackdown action spectacle of the season, but it’s fueled at the core by a wounded psyche and an Oedipal conflict

Marker and Japan by Olaf Möller

Marker and the militant collective SLON by Min Lee

Letter from Siberia by André Bazin

Description of a Struggle by J. Hoberman