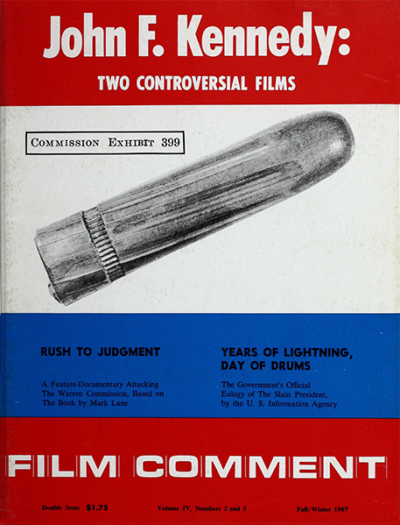 Mme. Veuve lives in Lausanne with her husband and two children but frequently tours the European festivals as representative of the Festival Dei Popoli in Florence. She has worked at the Musee de l’Homme in Paris and has collaborated with…

The Kennedy Film at Warrenton
By Martin S. Dworkin

Background to The Kennedy Film

Use and Abuse of Stock Footage

Two Sides of the Civil Rights Coin
By William Sloan

The Films of Jean Rouch
By James Blue

The Films of David Wark Griffith
The Development of Themes And Techniques m Forty-two of His Films
By Richard J. Meyer

The Film Index—A Bibliography, Volume I, The Film As Art compiled by Workers of the Writers Program of the WPA
Reviewed by Herman G. Weinberg

A Tower In Babel—A History of Broadcasting in the U.S. to 1933 by Erik Barnouw
Reviewed by Richard J. Meyer

A World On Film by Stanley Kauffmann
Reviewed by Lewis Jacobs

The Symbol by Alvah Bessie
Reviewed by Donald Skoller