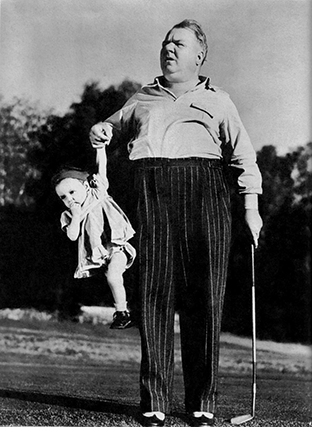 In 1940, the year FDR was once again re-elected, W.C. Fields published his own parodic self-endorsement, entitled Fields for President. Next month, the book comes back into print in a new edition by Taylor Trade (Rowman & Littlefield)—as well as the compendium W.C. Fields by Himself: His Intended Autobiography with Hitherto Unpublished Letters, Notes, Scripts, and Articles. Our January/February issue features a review of W.C. Fields by Himself, and for an added treat, below we reprint an excerpt from Fields for President, which demonstrates the comic’s peerless leadership qualities.

FIELDS, A MAN OF FIRM RESOLVE

Campaign resolutions are nothing more than overgrown New Year’s Resolutions: they are thrown together hastily at the last minute, with never a thought as to how they may be gracefully broken.

Now, I am a candidate with years of experience in the making and breaking of New Year’s Resolutions, and what I can accomplish with those, I can certainly accomplish with campaign resolutions.

From my long months of study on the question of New Year’s resolutions I have come to many important conclusions. In the first place, as I mentioned above, too many of us are inclined to put off New Year’s resolutions until 11 a.m. New Year’s morning, when we wake up in a white tie and tails, and mumble “a hair off’n the dog that bit me.” This is a sad mistake. Remorse runs rampant at such a time, and we are liable to consign ourselves to all sorts of extravagant penances, such as hying ourselves to monasteries in Tibet or Afghanistan, or spending our remaining days in Brooklyn to atone for numerous things.

I myself was the victim of the 11 a.m. Menace several years ago. The evening preceding January first, I was invited to a party by a couple who intended to get married (which they did, but not to each other). I awoke New Year’s Day to find a full-grown goat in bed beside me; worse than that, my head felt as though a manhole cover were resting on it. Imagine my surprise and chagrin when I reached up and found that there was a manhole cover resting on my head! You could have knocked me down with a cricket racquet, or club (or whatever they use) or a slapstick bass fiddle or—but why quibble? Right then and there I swore that I would never again poison my system with a maraschino cherry. Of course, it wasn’t two weeks before I slipped. Hoodwinked, yes. I thought it was a seedless grape. I washed it down with some snake-bite remedy that Grandpa always kept in a downstairs closet.

That is why, my friends I am making this desperate plea that the citizens of our nation avoid making reckless resolutions.

I finally devised a perfect plan for making resolutions, one which has stood me in good stead ever since.

In any event, if my gentle readers wish to take advantage of this simple plan, full directions are given herewith:

Early in November the prospective resolutioner should set aside an evening, settle himself an easy chair before a fire of eucalyptus logs and, whilst sipping a cup of Iron Mountain Elixir and Exhilarator, write down carefully all the luxuries of life he can forego without endangering his peace of mind or health. For instance, tripe, pedicures, snuff, hair singes, cello lessons, croquet, flinch, etc. When he has finally decided on which he wishes to give up, he should telephone his solicitor and direct him to draw up a statement that will leave a few loopholes in case the strain grows too great on his nerves or impairs his health during the fatal ensuing twelve months.

The following is a contract I had drawn up in 1931, two months after the head of a certain studio kicked me below the spine and yelled at the top of his voice, “Git!” I have always considered this document a meticulous model of jurisprudence and foresight:

“I, W.C. Fields, being of sound mind and body, agree that during the year of 1932 I will cease and desist from eating spun sugar except under the following circumstances: (1) If said spun sugar is forced upon me by a person or persons unknown, professional bartenders included. (2) If aforementioned spun sugar is disguised beyond reasonable recognition. (3) If spun sugar in question is the only means of sustenance available due to a special and extraordinary conditions, circumstances, etc., ad libitum, I to be the judge.”

This resolution I have never had the slightest trouble with, and that is because I left myself beaucoup—meaning plenty (we are not all up on foreign languages)—of legal leeway.

I will take full advantage of such technicalities in making and breaking all my campaign resolutions. For instance, just now I am framing a very important resolution, namely, that I will lower the income tax and decrease government running expenses (assuming, of course, that there will be any such thing as income when I become President, and that the government will be running). Now, it is obvious that I could not lower the income tax without increasing government running expenses, because printing up revised income-tax forms would cost a fortune. Therefore, when I eventually break this resolution, it will be looked upon by the American public as a patriotic action.

The truth is—and this is the most daring statement I have ever made except where and when only circumstances altered my opinion for reasons best known to myself—the whole custom of New Year’s resolutions—as well as Presidential resolutions—is based on an insidious fault of logic!

There, now, you have it—the whole unvarnished. And the amazing thing about it is that the fault is an extremely simple one, but for thousands of years—may I add, many thousands of years?—mankind has entirely overlooked it. It has remained for one heroic individual of peerless ingenuity to put his mind to the problem and uncover the seemingly intangible solution. I speak modestly of W.C. Fields. I wish you could all see my face as I blushingly pen these lines. By Steven Mears
In honor of the centennial of the actor/writer/director/cartoonist/activist/magician's birth, a rare project launched at Welles' alma mater
Subscribe to the Magazine