I’ve seen it argued that an obsession with film preservation is unhealthy, that our energy is better spent on seeking out and funding new talent. Aside from the obvious problem with that idea — film love is not and should never be a zero-sum game between Old and New — this also assumes there is little left to be found on a voyage into the past, as if we’ve identified the greats and can safely move on.

For anyone tempted by the enough-with-archives argument, there is a salutary dose of humility playing at the Museum of Modern Art this Saturday at 7:30 p.m. The movie, from 1930, is called Tonka Sibenice, usually translated as Tonka of the Gallows, and it is part of the Museum of Modern Art’s series of Czech films from before their New Wave. Certainly the film isn’t wholly unknown in the U.S., but these days it’s close. Web writing in English yields very little dating from before this series began; an unscientific roll call of my classic-film-nut acquaintances found exactly one person who’d seen it. And yet it’s great enough to withstand the comparison to Sunrise that MoMA has slapped on its summary.

Made in 1930, Tonka of the Gallows was the first Czech film with post-synchronized sound, although it plays primarily as a silent movie with intertitles. The director, Karel Anton, soon moved on to a career directing comedies, which this film most assuredly is not. Based on a novel by Egon Erwin Kisch, it’s a melodrama that takes the hoariest of plots (country girl turns prostitute and can’t escape the life) and lifts it to another dimension altogether. As poor Tonka’s life spirals downward after she commits an act of generosity that turns her luck sour, Anton contrasts countryside and city in a way that is indeed very like Murnau’s masterpiece. Tonka is played by Ita Rina, an actress of shimmering emotional clarity (she also stars in the better-known Erotikon, directed by Gustav Machaty in 1929). The film opens with Tonka’s journey back to her village, on a spring day full of dappled light and smiling, weather-beaten peasants amused by her citified suit and pretty young face. She’s offered a drink from one man’s wine bottle and shyly refuses. Sunshine and breezes fill the first scenes of the movie. Tonka brings her mother (Vera Baranovskaya) a shawl and other gifts, and reconnects with a childhood sweetheart named Jan (Jack Mylong). But it’s obvious that she harbors a secret. Rina’s eyes are haunted, and when Jan gives her a bear hug, she reacts for an instant with real fright. It’s a remarkable moment that has an echo when, after a spring spent in fields and country dances, he tries to propose, moves to kiss her, and Tonka breaks away in tears.

Instead she returns to nighttime Prague and the brothel where she works. Here there’s a marvelous moment in the sound design, when the soundtrack goes silent for a long beat, and the piano player drinks to her happiness. Then Rina as Tonka sings a song, in close-up, in French. The lighting is different, and the background behind her doesn’t match, but instead of seeming awkward, it’s like a window into Tonka’s thoughts, as the lyrics are about returning to a mother’s embrace.

Yet Tonka’s pivotal decision in the movie is never fully explained: she agrees to two policemen’s request for a woman to spend the night with a murderer (Josef Rovenský) before he is hanged. The girl feels condemned and trapped, too, that much is clear, but her initial terror when brought to the convict’s cell also suggests she’s punishing herself. If so, she succeeds beyond measure. The night is chaste, Tonka’s act is selfless, but it marks her forever as the bride of death. No customer wants her, no fellow whore protects her, and soon no street denizen pities her. When she returns to her village, and tries to start over with Jan, the former kindly faces of those peasants turn ghoulish and hateful upon hearing of her past.

One of the things I love most about silent movies is the poetry of their interlocking images, one feeding another. In her childhood bedroom Tonka finds her old doll, and tenderly places it where she can see it, every memory of playing with it etched on her face. Later, in the brothel, when the traveling salesman shows her a windup elf toy, the same expression darts across her face for one brief moment. She tucks it in her dress, and as she spends the night with the condemned man, she uses it to give him an instant of simple joy, too. He’s an obviously harsh and violent man, but Tonka alone sees his humanity. From the moment the murderer is marched away, fewer and fewer people will see or care about hers.

Over the course of the film Tonka goes from the girl shyly refusing a sip of wine to alcoholism so desperate that she sells her treasured, never-used wedding dress for a few coins to buy a drink. It’s inevitable, by the laws of such tales, that Tonka will meet her Jan once more, and she does, just before meeting her doom. In a climax of extraordinary power and beauty, Tonka envisions a different fate — smiling good wishes from every city face that had mocked her; a train that’s empty save breezes and sunlight, taking her back to a village that wants her after all; Jan and her mother both hers once more.

The finale thus circles back to the movie’s epigraph, taken from Matthew 21:31: “Verily I say unto you, that the publicans and the harlots go into the kingdom of God before you.” The true answer to the riddle of the title character’s self-destruction may lie in a scene late in the movie in which a hungry, homeless Tonka gives her last two lumps of sugar to a scruffy cart-horse. Kindness is ingrained in her, it’s an impulse she can’t contain. It’s her downfall, but in Anton’s swirling vision, perhaps it’s Tonka’s salvation, too. By Farran Smith Nehme
John Huston plays himself: the new restoration of the auteur's Italian-set caper polishes its shambolic charm to a shine 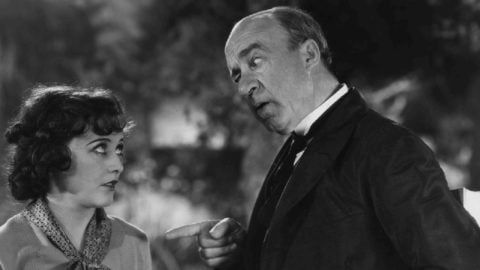 By Farran Smith Nehme
John Huston plays himself: the new restoration of the auteur's Italian-set caper polishes its shambolic charm to a shine

By Farran Smith Nehme
French missing in the USA: on the unique charms of the Port of Shadows actress who never landed (or recovered from) her American crossover
Subscribe to the Magazine