TCM Diary: None but the Lonely Heart + All Fall Down None but the Lonely Heart

When social realist playwright Clifford Odets was tasked with shepherding Richard Llewellyn’s novel None but the Lonely Heart to the screen, he received a crash course in the star system courtesy of RKO. “It was about a 19-year-old boy with pimples whose two desires are to have a girlfriend and to get a new suit of clothes,” he recounted to friends. The 1944 film, which would mark Odets’s directorial debut, would be headlined by a 40-year-old Cary Grant. The writer known for Depression-era cris de coeur like Waiting for Lefty and Awake and Sing! must have felt like his fictional counterpart, Barton Fink, when he was told to hammer out a wrestling picture for Wallace Beery; “I had to change the concept of the book completely,” Odets deadpanned.

In adapting the novel (from the author of How Green Was My Valley, which had inspired John Ford’s 1941 Oscar winner), Odets tailored the material to his own interests far more than his star’s—but in one of Hollywood’s supreme paradoxes, the role of Ernie Mott, which took Grant as far from his comic wheelhouse as he was ever willing to venture, revealed his true-life origins more than any other character he would play. Born Archibald Leach in Bristol, England, to an alcoholic factory worker and a seamstress who suffered from clinical depression, Grant (which would not become his moniker until he signed a contract with Paramount in 1931) began performing with a company of acrobats at the age of 6. By the time he was a teenager he was touring America with the troupe, relishing the chance to escape his squalid home life and take on a crowd-pleasing image. Most scarringly, he’d been told at age 9 that his mother had gone on holiday and subsequently died, when in fact his father had placed her in a mental institution and remarried. Grant did not learn the truth until 25 years later, whereupon he withdrew her from the asylum and tried in vain to reconnect with her.

It’s hard to banish these biographical details when watching Grant’s Ernie haltingly struggle to do right by his estranged mother (Ethel Barrymore), a dying shopkeeper, with any hope of salvation squelched by the extreme poverty that drove Ernie from home as a youth. “Did you love my old man?” he demands of her. “Love’s not for the poor, son,” she answers ruefully. “No time for it.” Ernie has spent the interim years as a wandering jack-of-all-trades, claiming aptitude as an inventor, exterminator, furniture polisher, and piano tuner—though his only demonstrable skill is charm, and his only viable career path crime. “When does the human soul get off its knees?” he implores, raging at the ignominy of the destitute in a scene that derives not from Llewellyn’s novel or Grant’s urbane façade, but from the wellspring of social concern that defines Odets as a dramatist—and perhaps also from the tortured memories of one Archie Leach of Bristol. None but the Lonely Heart

As is always the case when a familiar star augments his trademark mannerisms, the cockney cadence of Grant’s Ernie (“Part o’meself, ‘e is!”) takes some adjustment. Of course, the Transatlantic accent he adopted for all of his films save this one and Sylvia Scarlett was no more authentic to him than his stage name—though in point of fact, the East End London speech patterns did not come naturally either, but were cultivated for his theatrical persona. It’s a tribute to Grant’s chameleonic nature that when he dons a suit midway through the film—his standard uniform—now it seems out of place, so thoroughly have we come to accept Ernie the working-class scrounger.

Likewise astonishing is how credible he and the American-born Barrymore appear as mother and son. The theatrical royal (billed here as “Miss Ethel Barrymore”) had been absent from screens for a dozen years and had nothing complimentary to say about the process of filmmaking; however, the bounties she received for None but the Lonely Heart (including a Supporting Actress Oscar) inspired a reappraisal of the medium—and a subsequent relocation to Hollywood, where she amassed three more nominations before the decade’s end. Here her watchful, weary gaze forms the basis of her characterization: forever staring out the window like so many Odets tenement-dwellers, Ma has worried herself sick over two generations of Mott men, and now only force of habit keeps her on her feet. A proud, stubborn woman who wears ornate hats in the house along with her Salvation Army rags, she will sell goods to the destitute but will not fence stolen merchandise for self-enrichment. In Odets’s framework, nearly everyone has some form of cockeyed conscience, and here Ernie holds equal and opposite principles: in a declaration later cited by Lela Rogers (mother of Ginger) before the House Un-American Activities Committee as evidence of Odets’s Communist leanings, Ernie admonishes Ma, “You’re not going to get me to work here and squeeze pennies out of little people who are poorer than I am!” For him, at least in theory, grand theft is more honorable than petty extortion.

Yet there’s a palpable bond between them, redolent of shared pain and mutual understanding, and neither high-powered performer condescends to the humble characters they portray. Grant offers some of the best acting of his career as Ernie tries to mask his concern for Ma’s welfare so she won’t suspect he knows her terminal prognosis. When she tells her disillusioned son that he’s full of tenderness but “it wants an object to lavish it on,” he replies “What’s the matter with you, Ma? You’re an object.” In this moment we see that Ma was wrong: even the poor have time for love. Especially the poor, Odets might suggest, since they have time for little else. A starkly different mother and son appear in All Fall Down, another rare foray into screenwriting by a distinguished playwright. In such works as Picnic and Bus Stop, William Inge explored the frustrations roiling beneath placid Midwestern domesticity, and in James Leo Herlihy’s novel, filmed in 1962 by John Frankenheimer, he found a vessel suited to his preoccupations. Warren Beatty stars as Berry-Berry, and if the name evokes a fatal paucity of nutrition (the affliction “beriberi” is caused by Vitamin B1 deficiency), that serves as an able account of the character and his influence: he infects and depletes everyone with whom he comes into contact.

Like many Inge personages, particularly Picnic’s Hal (played by William Holden in the 1955 film adaptation), Berry-Berry barnstorms through the heartland, igniting sexually frustrated females of all ages and leaving them sated but unfulfilled. He’s idolized by his younger brother Clint (professional hero-worshiper Brandon de Wilde, a decade past Shane but still a year away from Hud). And he’s the Oedipal fixation of mother Annabel, played by Angela Lansbury in the first of two galvanizing 1962 portraits of toxic matriarchy for Frankenheimer, the other being her ruthless Soviet agent in The Manchurian Candidate.

Lansbury’s plummy demeanor often belies a calculating nature, and that’s certainly the case with her Annabel, who ostensibly lives to nurture her children but takes every opportunity to needle them for petty violations (dangling their feet out of bed when they sleep), and belittle their high-minded, hard-drinking father Ralph (Karl Malden, who manages to appear both sonorous and ineffectual). Berry-Berry’s return home and passionate affair with houseguest Echo (Eva Marie Saint) confronts Anabel with the unwholesome essence of her feelings for her eldest son, and the lengths to which she’ll go to retain supremacy in her domicile. The baseness of Annabel’s character is indicated in a heartbreaking sequence when Ralph brings home three elderly vagrants on Christmas Eve—“three kings.” Once they’ve been feted with liquor, Annabel offers them ten dollars apiece in place of the lodgings and good cheer promised by Ralph, to prove to her husband that avarice trumps fellowship. All three instantly accept. Lansbury began playing mothers far above her actual age with the 1960 stage production of A Taste of Honey (in which “daughter” Joan Plowright was a mere four years younger) and followed that with her stint as Elvis’s parent in Blue Hawaii (a performance she renounces). When filming All Fall Down, Lansbury was actually a year younger than Saint, cast as her best friend’s daughter. But neither the age discrepancy nor the fundamental Midwesterness of the role (the word “oodles” creeps into her conversation) prevents the actress from making a meal of Inge’s histrionic screenplay—especially when, her back turned to Ralph, she acknowledges that seeing Berry-Berry in love, even with a “perfectly nice girl,” causes her pain. Her face contorted with impure longing, she offers no euphemisms or explanations—she simply, shockingly confides her envy of her son’s lover to her mystified husband.

Beatty, who made his film debut the year before in the Inge-scripted Splendor in the Grass, is used sparingly here; Berry-Berry is more catalyst than protagonist. Inge repurposes themes that course throughout his plays: parochial unrest (The Dark at the Top of the Stairs), sexual repression (Picnic), and unhealthy intergenerational desire (Come Back, Little Sheba). Only now they can all be found in a single character, brought to combustible life by Lansbury at the peak of her powers. And when finally she howls “I don’t care what he’s done—I’ll love him forever!”, the full weight of the title comes crashing down and no one is left standing. By Nick Pinkerton
Expressive esoterica: the director of A Kiss Before Dying, Crime of Passion, and Brainwashed had a knack for depicting misfits By Dan Callahan
Newman's own: the actor's forays behind the camera more often than not featured complicated female anti-heroes 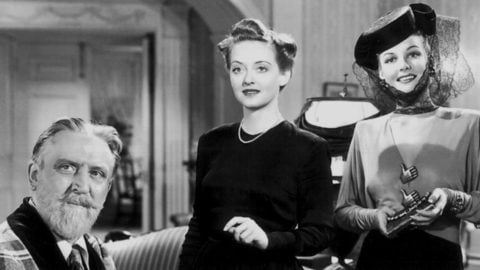 By Nick Pinkerton
Expressive esoterica: the director of A Kiss Before Dying, Crime of Passion, and Brainwashed had a knack for depicting misfits

By Dan Callahan
Newman's own: the actor's forays behind the camera more often than not featured complicated female anti-heroes
Subscribe to the Magazine