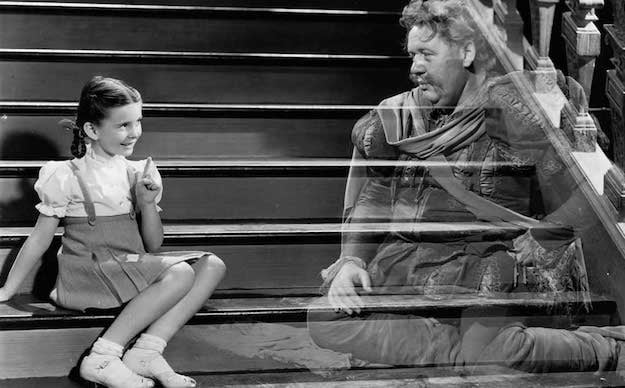 Oscar Wilde’s novella The Canterville Ghost, published in 1887 in The Court and Society Review, is a spooky-comic hybrid. The ghost in question has frightened generations of people since then, but he’s really just a bored showoff looking for attention. MGM’s 1944 film adaptation adds one more layer of hybridization. Released just one month after D-Day, The Canterville Ghost takes place in the wartime world of the 1940s, and includes two elaborate battle sequences. In his wildest dreams Oscar Wilde could never have imagined that an adaptation of his story would involve Charles Laughton straddling a gigantic unexploded mine as it’s dragged across the countryside by an American jeep. It sounds completely absurd! But it’s entertaining, too, with Laughton as the ghost of Sir Simon Canterville—sometimes transparent, sometimes corporeal—mooning around, yearning for the peace of the grave.

Wilde’s original story starts when an American family moves into Canterville Chase, a huge manor said to be haunted. Centuries ago, Sir Simon killed his wife and, for his crime, her brothers starved him to death. His ghost has since haunted the manor, bored out of his mind and mixing things up for himself by taking on a variety of “roles” (“the Vampire Monk,” “the Bloodless Benedictine,” “the Blood-sucker of Bexley Moore,” etc.). He revels in terrorizing others, recalling happily “the furor he had excited one lonely June evening by merely playing ninepins with his own bones upon the lawn-tennis ground.” This is ghost story as slapstick vaudeville. The only American not terrified is 15-year-old Virginia, who bonds with the ghost, sympathizing with his plight. In Wilde’s hands, The Canterville Ghost is less ghost story and more gentle satire of the culture clash between England and America. (In fact, The Canterville Ghost contains a version of the line most commonly attributed to George Bernard Shaw: “[We] have really everything in common with America nowadays, except, of course, language.”)

In his screenplay adaptation, Edwin Blum takes some elements from the original, but invents a lot, including a moral about overcoming your fears. The “American family” is now a platoon of American G.I.’s who’ve commandeered Canterville manor as their barracks before shipping out to France. Fifteen-year-old Virginia is now 6-year-old “Lady Jessica” (Margaret O’Brien), a descendent of Sir Simon the ghost, who befriends all of the American soldiers, especially Cuffy (Robert Young)

The film starts in 1634, when Sir Simon’s younger brother, a blonde mop-topped Peter Lawford, is discovered canoodling with another man’s wife. Sir Simon is challenged to a duel to defend his brother’s honor, but he gallops away in terror. Disgraced by his son’s cowardice, Sir Simon’s father (Reginald Owen) orders Simon to be bricked up into an alcove and left there to perish. That all happens, but Simon remains condemned to being a ghost until a Canterville “kinsman” performs an act of courage (not very likely since the Canterville cowardice is legendary). As it turns out, Cuffy has a birthmark on the back of his neck just like Sir Simon’s! Could it be that this American soldier is the “kinsman” Sir Simon has been awaiting for 300 years? Will Cuffy be brave in battle, or will he flake out, just like all the Cantervilles before him? (None of this is in the original.)

Shifting Sir Simon’s backstory to kick off the narrative was not the smartest move. The language in the opening sequences is so artificial you may be forgiven if you wonder, “Is the whole movie going to be people standing around wearing doublets and hose saying things like ‘She was wed to thee at yesteryear’?” When the American soldiers come tramping into the manor, exclaiming, “Holy catfish!” at their new surroundings, as the servants look on in horror, the movie ignites. Wilde mocking Americans in the story becomes, improbably, a celebration of American swagger in the movie. The Yanks may be uncouth but at least they aren’t snobs. At one point, Sir Simon moans to Cuffy, who has befriended him, “What can a people without ancestors know about ghosts?” Cuffy responds, “We have titles too. Prince Michael Romanoff, Count Basie, Duke Ellington!” When the soldiers attend a very British local party at a nearby village, the Americans turn it into a rager. A soldier takes over the piano, launching into a boogie-woogie song, and two soldiers jitterbug in the middle of a circle of clapping people. It’s gender-bending in a particularly exciting way, especially since it’s not played for laughs. This is a legitimate dance number, and these two guys could really dance. They flip over each other’s heads, they slide through each other’s legs, spinning out, coming back together. The dance was created by Jack Donohue, who started in the Ziegfeld Follies, before working in Hollywood—mostly at MGM—as a choreographer, dance captain, and director. The scene has nothing to do with anything, really, but it is alive with joy and movement.

For such a hulking giant, Charles Laughton as the ghost of the manor moved with such fluidity and grace, and he’s so light on his feet here, running down corridors, launching over benches, falling into melodramatic poses against the wall. When he stares out the window at the graveyard where he longs to rest, his eyes gleam with real torment. He’s funny too, saying, as though he’d forgotten an appointment, “I really must go jibber at the oriole window now.” In his famous biography of Laughton, Charles Higham described this performance as “burlesque, melodrama, pathetic farce, the comedy of manners, and outright tragedy.” That about covers it—the genius of Laughton. Robert Young, a lovely actor, plays his role as a sensitive soldier simply, creating a sweet dynamic with Margaret O’Brien. Considering the year, it’s striking to see Young’s willingness in playing the scene where Cuffy freezes in terror during a battle with the Nazis. It’s a bold choice for a leading man, and Young doesn’t hold back.

There were a couple of bumps in the road during production. After five weeks of shooting, director Norman Z. McLeod was replaced by Jules Dassin (who gained fame later with films like Night and the City, Rififi, Topkapi). Cinematographer William H. Daniels was replaced by Robert Planck. The nighttime photography during the two battle sequences is drenched in gloom and beauty. In one shot of a huge hill, a troop of G.I.’s descend its slope, dark shadows moving across a dark landscape. There’s another scene where motorcycles careen through a forest, headlights piercing the night. Whoever was responsible for these scenes (and it’s hard to know), they are stunning. Art director Cedric Gibbons fills the spaces of the Canterville manor with so much detail it’s overwhelming, a hallmark of his exquisite work. There are long hallways hung with oil paintings, staircases leading up to balconies, a cavernous room filled with army cots and military gear. Real care has gone into every detail.

Numerous adaptations of Wilde’s story have been made. The 1944 film may be the strangest one of all, with its swing into World War II heroics. In Wilde’s play Lady Windermere’s Fan, written just six years after The Canterville Ghost, Lord Darlington says, “It is absurd to divide people into good and bad. People are either charming or tedious.” You could say the same thing about movies. The Canterville Ghost is most definitely charming. By Justin Stewart
On his own again, naturally: the first cinematic retelling of Hugh Glass’s harrowing frontier saga of survival also indulged in embellishment By Sheila O'Malley
Voice of experience: the Hollywood actress brought a sense of hard-won wisdom and forthrightness to The Big Sleep, Tarnished Angels, and more By Justin Stewart
On his own again, naturally: the first cinematic retelling of Hugh Glass’s harrowing frontier saga of survival also indulged in embellishment
Subscribe to the Magazine

By Sheila O'Malley
Voice of experience: the Hollywood actress brought a sense of hard-won wisdom and forthrightness to The Big Sleep, Tarnished Angels, and more