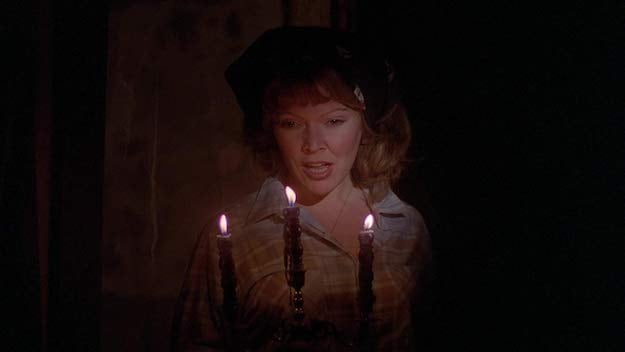 Susan Tyrrell was born Susan Jillian Creamer to a top William Morris talent agent father and a prim English socialite mother whom Susan would eventually disown after a “miserable” (but financially comfortable) upbringing. Her father died while Susan was still a teenager, but not before his ample industry connections helped her land stage roles which led to membership in the Repertory Theatre of Lincoln Center and a substantial screen part as a lady bank robber opposite Gregory Peck in Henry Hathaway’s Shoot Out (1971). The next year, in what was miraculously only her second screen performance, Tyrrell fully and completely inhabited the role for which she is still best remembered—barfly Oma Lee Greer in John Huston’s Fat City. Tyrrell received an Oscar nomination for her indelible turn as the alcoholic Oma; though only lightly acquainted with booze herself, Tyrrell uncannily exhibits toper traits like lightswitch-fast shifts from giddiness and bellicosity (“White man is the vermin of the Earth!”) to sobbing self-pity, fleeting enthusiasms, and a prematurely husky voice, but with a wounded toughness and sweetness all her own. Perched precariously on the edge of overacting, Tyrrell’s performance creates an electric frisson juxtaposed with the understatement of Stacy Keach and Jeff Bridges.

Tyrrell died in 2012 at age 67. Fat City proved to be her career Everest, but she didn’t stop working, even after essential thrombocythemia caused blood clots that forced her to have both legs amputated in 2000. Ten years after Fat City (a part in Andy Warhol’s Bad came in between), however, she gave a performance of similar scenery-swallowing hysteria and originality in Butcher, Baker, Nightmare Maker—a more exploitative and less pedigreed affair than the Huston film, but a liberating showcase for Tyrrell’s virtuosity, with scads of other satellite pleasures and points of interest besides. William Asher, a prolific director of television and American International Pictures beach party movies in the ’60s, directs with a meat-and-potatoes efficiency and visual sense, letting the casting, risk-taking performances, and the twisted, quirky screenplay (Stephen Breimer, Boon Collins, and Alan Jay Glueckman are credited) carry the day. Tyrrell is Cheryl Roberts, who dotes lovingly and inappropriately closely on her nephew Billy (Jimmy McNichol), whose parents died in a car crash after leaving the bawling baby Billy in the arms of Aunt Cheryl. Suspicion of Cheryl is planted immediately as her goodbye-waving smile vanishes instantly after the parents depart, and we see that their car’s brakes had been cut in an apparent murderous bid to claim Billy by appalling means.

After this gruesome opening salvo, the film (also known as Night Warning) jumps ahead 14 years to a high school-aged Billy living alone with Aunt Cheryl, whose flirtatious, possessive treatment of him raises innumerable red flags. Billy’s in many ways a normal teen, swigging milk straight from the carton because “why dirty a glass?”, bullied at basketball practice by Eddie (Bill Paxton, already in frightening budding-psychotic Near Dark mode), and so far chastely dating classmate Julia (Julia Duffy). But we see Cheryl wake Billy up with purrs and love scratches, walk freely into the bathroom while he’s stepping into the shower, and reacting with fearsome jealousy when Billy announces that he hopes to join Julia at the University of Denver after graduation, on a basketball scholarship (“College is for rich kids and people with brains—you wouldn’t fit in!”). Retreating to the candlelit shrine she keeps in the basement, she tells the portrait of some unnamed handsome former lover that she has plans to keep Billy in-house: “Something will happen. He’ll see he needs me.” The harebrained plan involves stabbing a cable guy to death and a rape self-defense claim that ensnares Billy, whom she anticipates would walk in on the bloody scene.

Seedy stuff, and its exploitative cocktail of incest themes and squibs of slasher gore aligns it with the earlier likes of Silent Night, Bloody Night (1972) and The Baby (1973). If the aunt-nephew intimacy isn’t indecent enough for you, there is also a ragingly bigoted and homophobic cop on the case of the slain cable guy. Stocky, blocky Swede Bo Svenson (The Inglorious Basterds, North Dallas Forty) plays Detective Joe Carlson as a smirking, hate-filled jerk whose powers of detection are clouded by his consuming homophobia; he’s a direct descendant of Robert Ryan’s anti-semitic Detective Montgomery in Crossfire (1947) and others in the illustrious line of cinematic dirty cops. Carlson’s prejudice-addled theory involves a closeted Billy as the killer, embroiled in a love triangle with the cable guy and the basketball coach (Steve Eastin, avoiding all stereotypes). The latter is openly gay and, harrassed by Carlson and mocked by Eddie behind his back, the most sympathetic character in the film, in a progressive touch (pointedly, the other villain, Cheryl, is another homophobe, asking Billy, “Do you know that homosexuals are very, very sick?”). In a garish checkered blazer and three buttons undone under his chunky tie, Carlson freely uses hate speech, confronting Billy with “Doesn’t it bother you that he’s a fag? Are you a fag?”. More subtly, Carlson’s spirit is summed up by his reaction to a frothing guard dog who ferociously barks at him when he arrives to interrogate/harass Julia: “It’s all right, I like dogs like that.”

Lovely character actor work (by Eastin but also Marcia Lewis and Britt Leach) help humanize the insanity, but it’s Tyrrell and her commitment to the disreputable role of Aunt Cheryl that finally stays with you. After Cheryl saws off most of her hair, neighbor Marcia (Lewis) reacts with the appropriate disguised aghastness, but Tyrrell gives a pathetic poignancy to Cheryl’s oblivious “I think it makes me look younger!” The character is a spiritual cousin to Piper Laurie’s timeless fanatical Carrie matriarch, though Cheryl’s obsessions are fixated on a single formative romantic betrayal, and her abuse of her charge is carried out in a loving guise. Most of all, the performance is a testament to the alarming, wide-ranging talent of a great, underutilized actress. By Sheila O'Malley
At a tender age: two very different 1970s films show females on the verge of a nervous breakdown
Subscribe to the Magazine