It had been seven years since Mildred Pierce, the role Joan Crawford had to audition for at Warner Brothers after MGM terminated her contract, and the hit she rode to an Oscar. But even the greatest Hollywood careers oscillate like the stock market, and though the late 1940s saw some of her best work, by 1952 Crawford was once more in a box-office trough. She asked Warners to let her go, they did, and Crawford went to RKO for Sudden Fear—where once again, she landed an Oscar nomination and a roaring success. Career-wise, betting against Crawford was a sucker’s game for much of her life.

Based on a novel by Edna Sherry, directed by David Miller, and with a screenplay by Robert Smith and Lenore Coffee (the woman who wrote the 1931 Possessed, one of Crawford’s early triumphs), Sudden Fear is a corker, a noir thriller about a woman deceived. (New York audiences can see a new restoration at Film Forum, starting this Friday.)

The action begins in a Broadway theater where Crawford’s character, Myra Hudson—both an heiress and a successful playwright—is in rehearsals for a play, a romantic melodrama that makes Camille sound like kitchen-sink realism. Onstage is Lester Blaine (Jack Palance), proclaiming, “You are all the women in my life. You’re the sister I never had, the mother I’ve almost forgotten, the wife I have always dreamed of.” Myra insists that Lester simply isn’t the heartthrob her leading role requires, and fires him. But we know instinctively that the play’s creepy sister-mother-wife speech is what this glamorous middle-aged playwright yearns to hear from a lover. And the enormously clever, intricate screenplay is already signaling that in the real world, only a very strange and dangerous man could fulfill that fantasy.

So it’s no surprise that when Myra again crosses paths with Lester, she spends the rest of the film’s first half falling in headlong, heedless love. She marries him, introduces him to her lawyer, her bridge team, her Nob Hill mansion in San Francisco. Meanwhile, his duplicity is signaled early and often, climaxing when Irene Neves (Gloria Grahame) shows up and turns out to be his ex-lover. She’s mad as hell, but not so mad she doesn’t want a piece of the heiress action. The turning point comes when, due to an elaborate dictation machine setup in Myra’s office, Lester and Irene are accidentally recorded plotting to bump off Myra.

What ever will Myra do? She may not need to work for a living, but she’s good at what she does. Myra concocts a plot to frame Lester and Irene—a play outline, in fact, based on what her knowledge of character tells her about these two rotten specimens. The film builds to an extraordinary finale, where Myra puts her plot in motion and, in a scene that shows Charles Lang’s distinctive cinematography at its moodiest, she must hide from Lester in Irene’s darkened apartment. Sudden Fear gives Crawford a lot of scenes that play out without her saying a word. When Myra listens to the fateful recording, Miller keeps the camera on her face, and Crawford seems to reach back to her silent-film beginnings, one emotion giving way swiftly to another. When she realizes her husband means to kill her, she backs away from the dictation machine, clear across the room, like it’s an animal she is trying to escape. She stumbles into an adjacent bathroom and (this is bluntly implied in a way that’s unusual for the era) she vomits. She retreats to her bedroom, looks down at the head impression left in Lester’s pillow, and shoves it off the bed—not with anger, but revulsion.

What are the Kübler-Ross stages of “my husband wants to murder me”? Crawford gives you every one—only it’s not acceptance that she shows the camera after her character has passed a long, sleepless night. It’s calculation, it’s hatred, and it’s ice-cold.

Crawford is given excellent support by an early-career Jack Palance, who also earned an Oscar nomination and later said that this film made him a star. By some accounts, Crawford wanted Marlon Brando, although who would buy 1952 Brando getting fired for not being sexy enough? Palance was described by directors, co-stars, critics and even the studio press agent as one of the ugliest stars in Hollywood. Given that, it’s interesting to note that Lester’s lighting gets visibly less forgiving as the movie goes on. Legend has it that Miller told Lang: “From here on, make him look awful. Shoot him as he is.” But I’ve never thought Palance was truly ugly; to me, he looks like someone just beat the hell out of Laurence Harvey. He had a nose that was broken multiple times during his early days as a boxer, and acne scars on his chin. But he was also tall and well built, with jutting cheekbones and a resonant speaking voice, and he projected virility. Much more importantly, Palance was a meticulous actor. Look at the plausible, but unsettling, grin with which Lester awakens Myra during their honeymoon. Contrast that with the “tell” that Palance gives his character: the way Lester’s chest visibly moves with his breathing, every time he encounters Irene.

Gloria Grahame as Irene makes good use of that nasal voice that always suggested she was up to something, even in the rare films where she wasn’t, and Irene moves like a woman conscious of every look she gets. She made this movie the same year as her Oscar for The Bad and the Beautiful, but Sudden Fear gives Grahame the more substantial part—scheming, venal, but inspiring some pity by the end.

In so many ways, Sudden Fear feels like quintessential Crawford, and peak 1952, starting with the credits: “Gowns by Sheila O’Brien, Lingerie by Tula, Furs by Al Teitelbaum, Hats by Rex Inc.” When Myra looks at her watch during the climactic scenes, of course it’s got a multi-strand pearl strap and a jeweled face; when a gun shows up, you better believe it has a pearl handle. And Crawford, who was well capable of underplaying when the need arose, clearly held nothing back in playing Myra. It’s the kind of Golden Age melodrama that may draw titters from some folks who have seen too much Mommie Dearest and not enough Autumn Leaves. Then again, Sudden Fear was always a film that required you to surrender to its high pitch, even around the time of its release. When François Truffaut saw it, he wrote: “If the audience laughs when it is not suitable to do so, I take that as a sign of daring, of finish. The public has lost the habit of intensity.” His review rambles over his entire philosophy of cinema, but when he circles back to Sudden Fear, Truffaut says that outside of two dream sequences, “there is not a shot in this film that isn’t necessary to its dramatic progression. Not a shot, either, that isn’t fascinating and doesn’t make us think it’s a masterpiece of cinema.”

Crawford, he adds, is “a question of taste.” For my taste, she’s brilliant, and so is Sudden Fear. 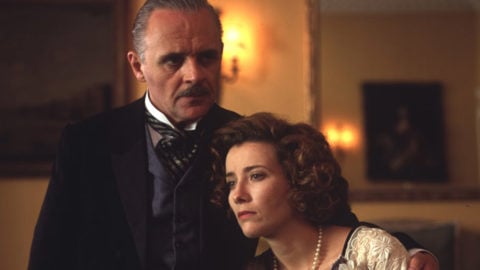 By Film Comment
Tea and sympathy: getting to the heart of what made the duo's best-loved adaptations so special By Film Comment
Tea and sympathy: getting to the heart of what made the duo's best-loved adaptations so special
Subscribe to the Magazine