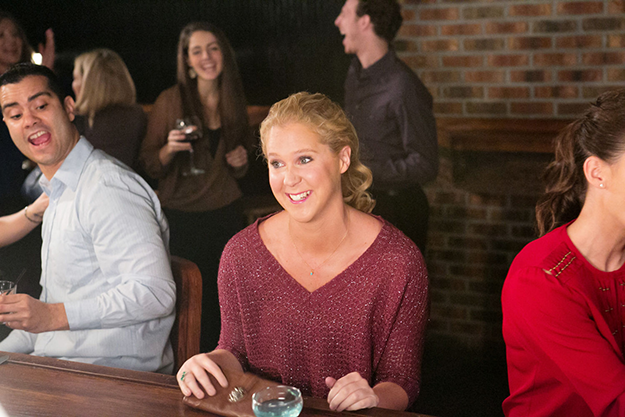 In the second installment of his “Game Changers” series in FILM COMMENT, Paul Schrader concluded his history of the close-up with an anecdote illustrating how Hollywood is currently addressing changing consumer habits: “Directors who work in television tell me producers come on set and say: ‘How are you going to see them on an iPhone? You’ve gotta come in close.’” Besides this rather grim aesthetic mandate, the shift toward small-screen viewing is also evidenced in how scripts for film and television are being written, in a trend that can be broadly described as “writing for the Internet.”

The tendency manifests in two major ways. The first is an established part of marketing: create a short sequence with viral appeal that can be easily repackaged as a clip for YouTube or Vine, or broken out into .GIFs, all of which can then be shared on social media. While this is meant to be an advertisement for the work, more often than not it’s a replacement—why bother watching the whole thing if you can see the finest cuts without any of the fat for free? (How many people who have seen “The Evolution of Mom Dancing Part One” featuring FLOTUS know who else Jimmy Fallon interviewed on that same program?) Another aspect of “writing for the Internet” is perhaps more indirect but no less self-aware: the selection of subject matter that will create breathlessly outraged or excessively laudatory think pieces—which means you have to see the whole, controversial episode of the Girls where Lena Dunham gets naked or Adam Driver jerks off on a cute girl’s chest to participate in the conversation.

The success of Inside Amy Schumer demonstrates what happens when these strategies flawlessly align, evidenced in sketches like “Last Fuckable Day” (featuring Tina Fey, Julia Louis-Dreyfus, and Patricia Arquette), “Girl, You Don’t Need Makeup,” or “Milk Milk Lemonade” (featuring Amber Rose). As someone who doesn’t have cable, I experienced these embedded in articles with titles like “7 Empowering ‘Inside Amy Schumer’ Sketches That Challenge Unrealistic Beauty Standards,” in profiles of Schumer, in “news” items highlighting the latest progressive sound byte from an interview with her, or in angry tweets calling her a racist. While I find myself agreeing with their feminist concerns (ageing, objectification) on some level, I very rarely, if ever, laugh at the “comedy” I’m watching—the message outweighs the actual comedy. (Before I’m accused of internalizing misogyny by leveling these criticisms, I will say that the last season of Louie committed similar, unfunny, importance-mongering sins, and is full of preachy monologues written in Louis C.K.’s voice and not the character actually speaking them; Broad City is infinitely funnier than anything that will be mentioned anywhere in this piece.) Schumer, like Dunham, feels more like a personality, a public image that’s calculatedly addressing a demographic—young, white, female, liberal, urban—than someone actually doing something innovative with comedy and filmmaking. Given Judd Apatow’s relationship to Dunham—who was instrumental in giving shape to her “voice of a generation,” as both an executive producer and occasional writer for Girls—it’s not surprising that he would eventually collaborate with Schumer. While Schumer and Apatow are separated by generation and gender, films like The 40 Year-Old Virgin, Knocked Up, Funny People, and This Is 40 seek that sweet spot of provocation, engagement with liberal values, arrested development, and squirm-inducing confessional moments of honesty. Amy Poehler, by contrast, has been incubating a wide variety of talent for over 15 years with her stake in the Upright Citizens Brigade Theater; her decision to develop Ilana Glazer and Abbi Jacobson’s web series into a full-fledged television show (despite both comedians’ failure to ascend to a Harold Night team) bespeaks an investment in female talent rather than simply the female hot-topic farmer.

I mention this difference in mentoring because in many ways, Trainwreck is a slightly updated, gender-reversed version of Knocked Up. In Trainwreck, Schumer plays Amy, a late-twenties/early-thirties child of divorce who works at a Maxim-like glossy and is more interested in sex and drinking than A Real Relationship. Bereft of sexual hang-ups or body issues—which is undeniably refreshing and important to see on screen—Amy just enjoys hook-up culture as much as it can possibly be enjoyed by a woman. She fucks whoever she wants, and is shown giving her partners instructions on how to pleasure her in one-night-stands where she calls the shots to ensure her orgasm. (This latter trait is crucial to keeping things real; again, it’s refreshing to see.) Amy tends to be attracted to gym rats, just as Ben Stone of Knocked Up preferred skinny women with large breasts, some of whom he ranked on a whiteboard in his living room as a warm-up for his naked celebrity movie database. Similarly, it’s only the men in Amy’s life who want to settle down and get serious while she continually pushes them away. Steven (wrestler John Cena), the roided-out bro she’s been consistently hooking up with, gets teary-eyed when she reveals that she’s been dating (i.e. fucking) other men, as he’d always dreamed of making her his “CrossFit queen.”

These early scenes of Amy’s dates with Steven—and others such as a Staten Island resident she dubs “Puerto Rican Golem”—are over-extended with multiple jokes. Rather than heightening any particular comedic concept, these feel more like “if you don’t laugh at that, try this”—swings and misses, more often than not. This kind of joke flooding is standard in all of Apatow’s features, each of which runs in excess of two hours; Apatow even praised Schumer and her sister for being able to create additional material on-set. But with Trainwreck, it also becomes purely tedious. The opening fourth of the film is shot through with moments in which Steven “accidentally” reveals his homoerotic desires: while talking dirty in the sack, he tells Amy “I thought you were a man from behind” and then immediately, vigorously climaxes. It’s too routine to be subversive, relying on cheap stereotypes for the same punch line— the gag that muscle-bound gym rats grunt and get sweaty with other men, and so obviously they’re all kinda gay, is neither fresh nor groundbreaking. (A later moment where Nikki, Amy’s best friend at work, awkwardly tells an African nurse “I had a black boyfriend once,” and gets “I bet your parents were proud” in response displays a similar Carlos Mencia–level grasp on topical, comedic wit.) But it would be disingenuous to complain about the romance part of the rom-com equation, because it’s obvious about where it will go from the start. Amy is assigned to write about sports medicine whiz-surgeon Dr. Aaron Conners (Bill Hader) by her capricious Brit editor Diana (Tilda Swinton, in her greatest comedic role) for a feature. Amy beds Aaron after a boozy dinner, he starts having feelings for her, and the Nora Ephron’s ghost-approved story goes exactly where you would expect it to: they get together, break up, then get together again. In this arc, we’re given the carefree and pleasure-obsessed “New Woman” versus the meticulous and emotional “New Man,” even though neither type is actually that new. Amy’s confused career girl guzzles white wine at every emotionally uncomfortable moment, whether she’s weathering a Stepford Wife’s spiel about how great it is to be a mom or worrying about how Aaron could accept how totally messed up she is—just as Cathy Guisewite’s Cathy popped chocolates and acked her way through independent womanhood.

Meanwhile, Aaron’s sensitivity and desire for a funny, equal companion has been a fixture of screwball comedies since Bringing Up Baby. (His neutered doc is not that dissimilar from Cary Grant’s semi-neurotic Dr. David Huxley, though at least Dr. Conners gets some sexual release.) To paraphrase Christopher Knowles’s final knee play of Einstein on the Beach: “It will be a familiar story, a story that is so very, very old, and yet it is so new. It is the old, old story of heterosexual love.” Amy, just as Ben (or Andy in The 40 Year-Old Virgin) before her, puts her childish things—a bong, one-hitter, and multiple bottles of alcohol—into a cardboard box towards the end of the film to prove she’s a serious person and serious about making their relationship work. (Here, she gifts them to her wisecracking neighborhood bum Dave Attell, who thanks her for both booze and a place to sleep.) However, the female spin on this “maturation” manifests itself in a mind-blowingly stupid way: Amy performs an elaborately choreographed dance sequence with the New York Knicks cheerleaders specially for Aaron after the team’s first game post–Amar’e Stoudemire’s corrective knee surgery. (As one of my colleagues has noted, part of Trainwreck’s fantastical wish fulfillment is the idea that the Knicks would be a viable franchise.) A creaky scene in which Marv Albert, Matthew Broderick, LeBron James, and Chris Evert stage a “love intervention” for Aaron after he breaks up with Amy shows a preference for one-joke star cameos over something grounded in character.

Would all of this have been easier to stomach had Schumer been better at physically expressing emotion? Shots are framed to give primacy to Schumer’s face, whether she’s rattling off one of her eight jokes per scene or at the office simply pretending not to be a queen bee among the workers, and the film suffers because of it. As a seasoned performer, she’s competent in sketches or during her standup, but here alternates between looking visibly nervous or just being a blank. (Mike Birbiglia, who wrote and starred in his own quirky-confessional Sleepwalk With Me, easily gives the film’s best performance as her doughy, awkward brother-in-law.) Amy’s racist/sexist/homophobic/pill-popping father dying of MS (played by the empathy-resistant Colin Quinn) is intended to inject a little pathos and give a reason for her scrappy aversion to monogamy, but fails on both counts because of her lack of acting chops. It’s also worth noting that for someone supposedly so averse to monogamy, she never once struggles with a desire to sleep with other guys while with Aaron—it turns out she was just another girl waiting for Mr. Right all along.

A missed opportunity for Schumer to sharpen her brand of comedy into something more than merely ideologically appealing, Trainwreck only showcases her limitations. Foundas on Film: The Five-Year Engagement, Safe, and Sound of My Voice

Foundas on Film: The Five-Year Engagement, Safe, and Sound of My Voice