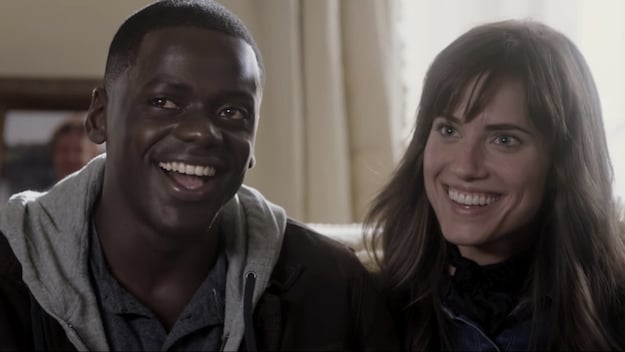 Directed by Jordan Peele of the comedy duo Key and Peele, Get Out is the horror film that we’ve been waiting for. It arrives just in time, at a moment when genre filmmaking can harness familiar tropes to reflect a post-election world that feels increasing surreal, backward-looking, and unfamiliar.

Chris Washington (British actor Daniel Kaluuya), a young photographer focused on black, urban street life, is going on a country weekend trip with Rose (Allison Williams), his girlfriend of four months, who, to his dismay, has neglected to tell her family that she is dating an African American. Rose assures him that her parents are not racists (a comment that elicited explosive laughter from the audience I watched the movie with), and they depart, leaving Chris’s dog in the care of his friend, Rod, a TSA agent (raucously played by comedian Lil Rel Howery). Things get shaky fast, starting with a car accident and a tense confrontation with a suburban police officer. Arriving at the Armitage estate, Chris meets Rose’s professional, apologetically liberal parents, Dean and Missy (Bradley Whitford and Catherine Keener), and her pugnacious brother Jeremy (a smarmy Caleb Landry Jones). Rounding out the household are two bizarrely robotic African American servants, Walter and Georgina (Marcus Henderson and Betty Gabriel); also on hand is Stephen Root as Jim Hudson, a blind art dealer who’s previously admired Chris’s artwork (in a role rising above an “old white man” lampoon, as do all the white actors, however motley).

It turns out to be the weekend of the family’s annual garden party, and the next day a funereal procession of middle-aged and elderly white guests arrive. They scarcely conceal their admiration of Chris’s physique and their curiosity about his imagined sexual prowess. Confused by his prior icy reception by the black servants, and a terrifying dream brought on by a nocturnal encounter with Missy, who is a hypnotherapist, Chris tries to disappear behind his camera lens. He is surprised to spot another young black man (Keith Stanfield) in his viewfinder at the party. Chris reaches out to him as a sympathetic brother, unleashing the frightening events that follow. Peele’s adept direction balances comedy and menace, with nuanced performances, especially from Kaluuya, who is a thoughtful, emotive presence. And the casting of Williams, of which I was suspicious, proves ideal, recalling her self-involved character Marnie from Girls. (Imagine Joanna Drayton—Hepburn and Tracy’s willful daughter who inexplicably snags and brings home Dr. Sidney Poitier in Guess Who’s Coming to Dinner—as a succubus.) Unlike another recent popular genre pastiche, which nostalgically samples celebrated film musicals of the past, their shortcomings unchallenged, Get Out self-consciously and subtly mines the conventions of the horror genre to create a film that resonates on multiple levels. It applies the universal concerns of horror movies (such as providing catharsis for our fears) to specific issues of race and racism, and particularly of blackness, effectively linking a nuanced storyline to the familiar signifiers of the genre—a sense of paranoiac dread, sudden scares, and requisite carnage—making visible the all too familiar microaggressions experienced daily by African Americans. In doing this, Peele references and draws upon the techniques of classic scary movies (Rosemary’s Baby, Night of the Living Dead), thrillers (Rear Window), and comedy and social problem movies (The ’Burbs).

Get Out is a great movie for people who dislike or dismiss horror expecting “gratuitous” explicit violence and nudity, because of its humor, PG sex scenes, and the analogies drawn to contemporary lived experiences of race relations. Get Out is also one of the rare horror movies that features a black protagonist, playing with the generic adage that black characters are habitually the first slaughtered. It also challenges the credence of African American audiences that black characters would instinctively run away from danger rather than bungling towards it like their hapless white counterparts, and presents a black male as the vulnerable figure of audience identification. Peele shows empathy for his characters, seeking to explain the Other rather than presenting him or her as a beast or merely monstrous.

So Get Out can be variously enjoyed as an entertaining thriller/comedy, or additionally read as a (much appreciated) fist bump to cinephiles of color as well as a complex evocation of eugenics, paternity, expropriation, and the interrelated/interracial legacy of slavery, while deploying stalwart horror motifs like the unknown, the woods, the haunted house, what/who’s in the basement, urban displacement, hypnotism . . .  The only thing missing is quicksand! True to the horror genre’s habits, the elderly, aging, and the past are regarded as especially unnerving, antique objects. Discordant old-timey music, bygone decor and technology feel sinister here and are associated with whiteness, and the Armitages’ coldly symmetrical, midcentury rec room, with its anachronistic console television, becomes a prison. While under hypnosis, Chris slips into a kind of televisual seeing as he falls into what is called the “Sunken Place” of his inner consciousness, in which he sees the images far above him with the appearance of a flickering, small-gauge home-movie frame.

I first saw Get Out at Brooklyn’s BAMcinématek one afternoon with a mostly white audience and more black people than I usually see there. Afterward, despite the sold-out screening and joyful audience of movie-talkers, I was melancholy walking around nearby Fort Greene. While the film was perceptively funny, there was just enough anger to give it a (vampiristic) bite and a gory, revelatory finale, and I was haunted by questions and lingering dread. What does it mean to look, to dress, act, or to be “black”?

The movie’s core horror is the entire or almost complete expropriation of black people physically, culturally, and creatively, leaving only some black consciousness retained deep inside the Sunken Place. It is a state of being in which the body is effectively paralyzed in place and emotions can no longer be expressed freely. That painful and scary notion reminded me of the unnerving denouement of The Vanishing, where to be curious—motivated by psychic grief (an emotion underexplored in horror)—to explore the unknown consciousness of another, by choice or by force, brings the film’s protagonist to a petrifying and deadly realization. Likewise, Get Out suggests that black people can become buried alive in whiteness, much in the way the minstrel’s blackface mask engulfs performers of color, but taken to an existential extreme. Or like the gentrification of a neighborhood. That’s why there was something profoundly discomfiting to me walking around on a sunny day in a vibrant, community that was once predominantly African American. During my second viewing (prior to the scary Oscars broadcast), this time with a majority of African American viewers and aware of upcoming shocks, I admired the details and hints threaded throughout the story (such as the revelation of the Armitages’ grandfather coming in second to Jesse Owens). These are woven together at the end yet leave obscured whether gentle Chris has become the beast he was stereotypically envisaged to be—maddened as in theater’s perennial blackface role, Othello, who is plainly referenced by Peele.

Ultimately, Get Out’s true terrors are universal and are voiced succinctly in a line from Moonlight, a film where characters also seek solace/refuge/desire in the transformation of the appearance and the body: “Who is you, Chiron?” What makes us who we are, what is our purpose? Can we view ourselves through the eyes of (an)other? And what about those Oscars?? Indeed, the broadcast ended with a return of the racial repressed as Moonlight emerged victoriously from the precise Sunken Place so chillingly depicted in Get Out!

Ina Diane Archer is an artist and filmmaker living in Brooklyn. She is pursuing an MA in Moving Image Archiving and Preservation at NYU and is the former co-chair of NYWIFT’s Women’s Film Preservation Fund. By Emma Myers
Loathe thy neighbor: the controversial Sundance film that involves performance art, gentrification, and artificial insemination
Subscribe to the Magazine