Drumroll please! The 2018 runaway favorite of Film Comment readers—apparently unthreatened by new distribution networks—was Alfonso Cuarón’s ROMA. This year, the opinions of our readers and critics diverged: where the 2018 Critics’ Poll ranked Zama as the top film, readers saw things a little differently, with Lucrecia Martel’s Amazonian period film coming in at #13. By and large—and much like 2017’s poll—titles that were more widely distributed (unlike Zama), ranked higher for readers. That being said, both readers and critics gave First Reformed (#2 here), The Favourite (#3), Shoplifters (#4), and Burning (#5) high marks, while big(ger)-budget, widely distributed films received more attention from readers, with Can You Ever Forgive Me (#16), Hereditary (#18), Annihilation (#19), and Isle of Dogs (#20), receiving placement in the Top 20. For each ballot, a first-place choice was allotted 20 points, 19 for second, and so on.

Read your comments on the top films below. Cuarón’s films are always visually impressive and ROMA is no exception, but what makes his most recent feature technically stand out is the sound design, specifically the mixing, even more than in Gravity.—Matthew Tesoro

ROMA follows in the tradition of the great neorealists Vittorio De Sica, Roberto Rossellini, and Satyajit Ray. I add Alfonso Cuarón to that list. Cuarón has directed a personal, richly textured, and transporting portrait of a family in Mexico City and the women who raised him.—George Zaver

A portrait of a historically overlooked, stigmatized, and mistreated profession. A lovingly produced display of strength and resilience.—Reid Ralston Few modern American films are as daringly spiritual as First Reformed, which takes on the burden of faith and the challenge of forgiveness and creates an ecclesiastical anti–Taxi Driver.—RJ Tougas, Winnipeg, Canada

Infusing the austere, transcendental style he wrote a book about in 1972 with the sex and violence of the loner genre that his own film career has extensively examined, First Reformed is a culmination of everything Schrader has been building toward for the last 40-plus years.—Ryan Bates

I’m not sure First Reformed earned its transcendental finale (films such as Ordet or The Gospel According to St. Matthew are more profound in the simplicity of their epiphanies), but when all is said and done, First Reformed is the perfect distillation of the last two years and will serve as a fitting epitaph for the 21st century.—Paul B. Watson The Favourite is true farce, a historical picture that sheds the austerity and stuffiness of its era and launches headlong into the zaniness of deadly court politics and madcap power plays.—Eliot Hay, St. Joseph County, IN

I like movies that are different and play with genres and Yorgos Lanthimos definitely did that here. What a great screenplay. I love the three leads (yes, no supporting roles) and the Kubrickian cinematography.—John Cochane, Maricopa County, AZ

The triple threat of Colman, Weisz, and Stone pays off in ways you wouldn’t believe. Colman broke my heart. Weisz embittered me. Stone took my breath away. We should have given all three of these women a Supporting Actress Oscar, but Colman’s win will have to suffice.—Sarah Karnes, San Juan County, WA Kore-eda once again steals my heart, sometimes to warm it and sometimes to break it. Wonderful performances and perfect production design, Shoplifters once more demonstrates Kore-eda as a magician of realism, naturalism, and mature, sincere emotion.—RJ Tougas

Sakura Andô was so good in Shoplifters that me and my friend decided to rename our own annual Oscars after her. And she won all the prizes.—Jakob Henselmans Burning is moving image [as] novel. I’ve thought about it every day since watching it.—Rusty Baldwin, Douglas County, KS It is hard for me to imagine that Spike Lee may be one of the most underrated U.S. directors these days, especially given the range and quality of his work over the past 30-plus years. The new film, I hope, will restore him to his rightful place at the top of the pack. Funny one moment, terrifying the next, and sometimes both at once!—J.R. Thelin, Buena Vista, VA

BlacKkKlansman is hands down the film of the year. It manages to succeed as political commentary, a narrative with chops, and acting of the highest order. An essential film by a master filmmaker.—Jane Steuerwald If Beale Street Could Talk, like Moonlight, is another elegiac and beautiful tone poem, genuinely moving and rapturous in its ecstasies and despairing and furious in its injustices.—Eliot Hay

No scene in If Beale Street Could Talk isn’t about love, and no scene fails to convey beauty, even through pain.—Jesse Webber, Montgomery County, MD Cold War is masterpiece of tone and craft. The layering and stacking of actors within the frame. The feeling that every side character is completely inhabited, with a full interior life. And perhaps, the single best shot of the year: when Zula jumps in the river and floats along, face out of the water, singing.—Will Bareford, Brooklyn, NY

Director of Photography Łukasz Żal’s use of telephoto zoom lenses (in contrast to the wide angle primes his contemporaries tend to use for films of similar scope) creates such elegant drama. Combined with the deep focus (f stops between 8 and 11) and 4:3 aspect ratio, I felt like I was in the room with Zula and Wiktor. Cold War is an incredible achievement in photography and deserves to be celebrated.—Aaron Hedquist, Washington, D.C. Sorry to Bother You looks at oppression more broadly, at the intersections of race and economics in our culture. Writer-director Boots Riley rides his anti-establishment ethos beyond realism into something more sinister, and more hilarious.—Gavin Dahl, Redstone, CO

I feel guilty pushing Sorry to Bother You to number four on my list. There were a few real cinematic wonders I had to slip in ahead of it, but Sorry to Bother You was the most fun I’d had at the movies since I was in film school.—John Saari, Portland, ME For the sheer giddy joy it brought me, The Ballad of Buster Scruggs is the first movie in my adult life that I’ve watched twice in a row.—Pawel Targonski, New York, NY

A wicked push/pull between the cinema of the American frontier as “The Western” and the brutal reality of its actual historic time and place creates the sense of maddening tension that this anthology thrives on.—Brett Scieszka, Los Angeles, CA Though 2018 was not a vintage year, Leave No Trace left a mark on me like no other film.—Dipesh Parmar You Were Never Really Here is the most visceral, raw motion picture experience of the decade. The claustrophobic performance of Joaquin Phoenix, the overlapping rhythms of the score and editing, and the seared mise en scène combine for a brutality on a subject most would not touch.—Jeffrey Scott, Dunkirk, MD 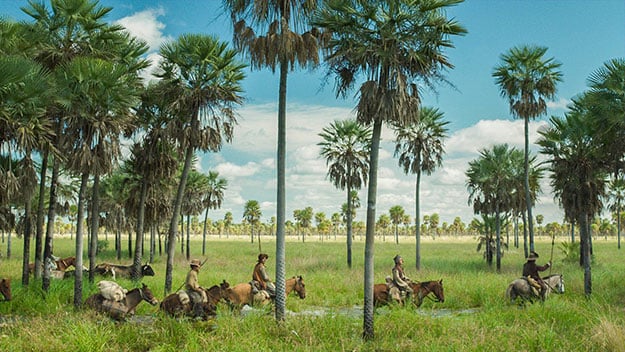 I only saw The Rider because the film I’d come to see was sold out. That was a very fortunate accident. This picture, in which the real people basically play themselves, is a beautiful, honest exploration of manhood, versus the common (and useless) ideas of what manhood is supposed to be.—Chris Dashiell, Tucson, AZ I caught Happy as Lazzaro in fragments on a laptop via Netflix and it still managed to transcend.—Andrew Miller 16. Can You Ever Forgive Me? Marielle Heller, USA

Can You Ever Forgive Me? is an incredibly entertaining and well-executed film. It was shot in an intimate way that highlights Melissa McCarthy’s magnificent, heartfelt performance. Richard E. Grant was excellent as well.—Shonda Lackey Eighth Grade was the most accurate movie about youth I have seen.—Emma S. A modern horror classic that cuts deep into the bleak heart of family dynamics. One of those films that defines the word “unshakable,” and has one of the greatest performances of all time from Toni Collette. I’ll never forget it for as long as I should live.—David Hollingsworth, Fayetteville, NC Annihilation will probably continue to stand as one of the best movies of the decade. Underappreciated since its release in January, it’s a beautiful blend of horror of the unknown and that dread that we are our own worst enemies. Surreal, sci-fi, and humane, there are few films like it in the history of cinema. That director Alex Garland achieves such a grand quality of mood, prescience, special effects, and performances should be celebrated.—Hans Morgenstern, Miami Beach, FL Anderson’s daring to work in a foreign idiom, guaranteeing thorny questions for most viewers and recriminations from the nitpicking woke feels more like an asset than a distraction. Frances McDormand’s limited role is both comfort food and anchor: a beacon in an admittedly colonial but ultimately forgivable effort.—Brett Scieszka, Los Angeles, CA

Beyond the Top 20: Flops, Favorites, and La Flor I’ve still got a lot of movies to watch, at the top of the list: Dead Souls and An Elephant Sitting Still. Nevertheless, I am grateful that I had the opportunity to watch La Flor, probably the best film of the decade. Truly a powerful experience.—Arturo Fabbro, Delicias, Mexico

There was an amazing output of classic restorations added to The Criterion Collection in 2018, with the crowning glory going to—finally!—Michael Powell and Emeric Pressburger’s A Matter of Life and Death. Leo McCarey’s The Awful Truth was another gem, matched by a glittering Some Like It Hot by Billy Wilder, and, lastly, a bejeweled offering of glamour gal Carole Lombard’s only Technicolor picture, Nothing Sacred.—Jonathan McMillan, Coquitlam, Canada

I know it wasn’t for everyone, but I feel that Suspiria was a perfect example of a remake: the premise of the original was carried over, but completely reevaluated from Argento’s original vision.—Andrew Tricarico

On Frederick Wiseman: we are very fortunate that one of the greatest documentarians is still making films. Unobtrusive with an unmatched eye. Resets the viewpoint of the audience. Makes the mundane significant. Watch a Wiseman doc and you’ll be ruined for the hyper-produced, hyperactive docs that are now in abundant supply.—Randall Yelverton, Peoria, IL By Film Comment
Work and play: scholar Kevin B. Lee discusses how labor, pleasure, and the special state of attention that we call cinema
Subscribe to the Magazine