Film of the Week: Atlantics 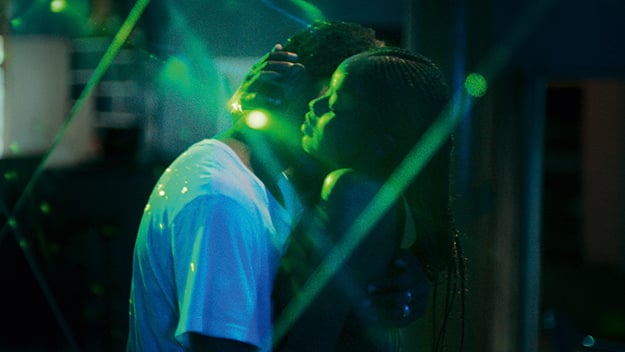 Few recent films have changed direction as often and as unpredictably as Mati Diop’s Atlantics. It begins in a vein of social realism—almost Ken Loach, Senegalese-style, with an anecdote of industrial dispute—then becomes a Romeo and Juliet story of star-crossed young love, before turning into a supernatural tale of mystery and revenge, with an unlikely role for a hapless young police inspector. Atlantics is so much a film of surprises that a second viewing—six months after its Cannes premiere—can’t quite equal the thrill of seeing it for the first time, and you begin to notice that, even at a relatively tight 104 minutes, the content feels a little thinly stretched. Even so, this is undeniably one of the boldest films of the year, crackling with invention, beauty, and anger.

For much of her career, Diop has been best known as an actor: she made her debut in Claire Denis’s 35 Shots of Rum, then worked with Antonio Campos (Simon Killer, on which she has a story credit), Matías Piñeiro (Hermia & Helena), and others. She has also directed several shorts, including the 45-minute documentary A Thousand Suns (2013), which paid tribute to Touki Bouki, perhaps the best-known work of her uncle, the celebrated Senegalese director Djibril Diop Mambéty. She also made an earlier, 2009 short named Atlantiques (with an “s”; the French title of her new feature, confusingly, is Atlantique in the singular), about a young man’s attempt to cross the ocean from Senegal to Europe.

This crossing, the struggle of so many courageous and often doomed migrants, has been the theme of various European films in the last few years, among them Gianfranco Rosi’s Fire at Sea and Jonas Carpignano’s Mediterraneo, both of which study the journeys from the point of arrival, and Boris Lokjine’s Hope, which traces its African characters’ route northward, through Algeria to the sea. Treatments of the theme have understandably tended to be realistic. Diop (born to a French mother and Senegalese father) approaches it from a radically different direction, closer to the magical realism—for want of a better description—characteristic of her uncle’s work, but in a way she makes entirely her own and irreducibly feminist as well. Atlantics starts on a building site in Dakar, Senegal, where laborers are working on a new urban development, its centerpiece a massive tower later seen looming like an eerie sci-fi presence over the local skyline at night (CGI shots, presumably: the building project, I understand, is real and already under way, although the tower itself is yet to materialize). The workers are not getting paid, and we see them clamoring angrily in an office, trying to get a supervisor—himself a working stiff who’s suffering like them—to cough up what is due to them. One young man, Suleiman (Ibrahima Traoré), is seen musing over his situation on the back of a truck taking him and his co-workers back to their home along the coast. Then we find him at a road crossing, exchanging gazes with the young woman he loves, Ada (Mama Sané); a handful of shots denote their mutual passion in wonderfully concise and tender shorthand, traffic rushing between them but barely seeming to interrupt the flow of desire between the young pair.

The couple go walking, then smooching by the sea; they’re made for each other, clearly. Then we learn that Ada is shortly to be married in a traditional Muslim wedding to Omer, a man she clearly is not interested in. With only a few days of freedom left, she sneaks out of her bedroom window at night to hang out with a group of her fun-loving girlfriends (“those sluts,” sniffs her traditional-minded friend Mariam) at a beachfront bar where the women dance to African R&B while ghostly green laser lights hover in the air. But tonight something has changed—the boys who frequent the bar have gone. Without saying goodbye, they have taken a small boat across the Atlantic, hoping for Europe and a better life. What the girls know—and if we’ve read anything about such desperate migration attempts, or seen films about them, we know too—is that the men have almost certainly signed their own death sentence. Their absence is signified by a strikingly desolate series of shots of their deserted bedrooms, sad mattresses draped on the floor, and in one telling image, an abandoned bottle of Man II Man cologne on a sideboard.

Yearning for Suleiman, Ada enters her own death-like state, best conveyed by a joyless moment sitting alongside lofty, shades-wearing playa Omer (Babacar Sylla) at his deluxe beach club—chill-out music, infinity pool, and all. Then comes the wedding, the family elders assembled, Ada sitting face hidden under a veil that covers her whole body. The centerpiece of the wedding, as far as her friends are concerned, is the fancy marital bed, a lush confection in gleaming white satin, around which they take pouting selfies—a nice comic touch of social satire that reminded me of another Senegalese film with touches of lifestyle satire, Ousmane Sembene’s Xala, in which the pretentious hero washes his car with Perrier. Ada’s beach-bar friends—glammed up in their shades and ornate hairdos—tell her she’s landed on her feet. Take the money, they say, enjoy the finer things in life and make the most of it—after all, Omer will be away for several months of the year. But someone, or something, has other plans for Ada—and the next time we see the bed, it is a charred mess of carbonized iron springs and ash. A young police inspector, Issa Diop (Amadou Mbow), is assigned to the case and asks Ada some searching questions. She is under investigation, but not only from him; her suspicious in-laws insist on her taking a virginity test and she passes, but this insult to her dignity pretty much kills off the marriage right there. Meanwhile, Issa doesn’t quite inspire confidence as a detective, finding himself mysteriously prone to exhaustion, fainting fits, and anxious sweats.

The fire happens some 40 minutes into the film; 20 minutes later, Atlantics has vaulted into another zone of strangeness altogether. Ada’s friends are seen walking in a trance through town at night, under eerie orange fluorescent lights; they are headed to the palatial house of Mr. Ndiaye, the boss of the building project, where they confront him, insisting that he pay the workmen their due. But in their night walks, the women are not quite themselves, but rather implacable wraiths, their eyeballs opaque pearl-white, like zombie women (in this year’s other great art film about supernatural possession, Bertrand Bonello’s Zombi Child, the haunted had black pupils: perhaps African and Haitian traditions differ on eye color and magic). At this point, Atlantics has over an hour to go, and has more or less used up its narrative surprises: Ada will fall out decisively with her jerk of a husband, the white-eyed women will continue to lean on Ndiaye till he gets his comeuppance, Issa will go on flailing around in bewilderment until the decisive moment at which he gets to tell his increasingly infuriated boss, “The case is closed” (a matter of opinion, since plenty still remains teasingly unresolved). Then Diop, co-writing with Olivier Demangel, ties everything up with a scene of surpassing beauty at the beach bar. The haunted women sit in front of a mirrored wall, on the other side of which, seen as their reflected doubles, are their absent men, lost in another world—a fabulously eerie Cocteau-esque touch, simple magic but superbly eloquent.

The film’s second half may be low on narrative, and somewhat overextended. Even so, Atlantics continues to communicate strongly as an increasingly impressionistic, poetic weaving of sounds, images, textures: the recurrent image of those spacy green lasers caressing the dancing women, a house glowing orange against the night sky, and magical repeated images of the sea. We know the water is the source of absolute menace, a place of almost certain death, but—as photographed by Claire Mathon—it’s also a site of surpassing beauty, sometimes a coppery surface, sometimes resembling a vast pink skin, waves rippling like muscles under a silky surface. The score by Kuwaiti electronic music composer Fatima Al Qadiri beautifully enhances the eeriness with chilly choir-like harmonies over pulsing patterns, apparently sampled from a kora, the West African string instrument.

The film ends with a strange exchange of selves and identities, neatly brought to a head in that mirror play. Diop’s drama is a classic ghost story of the return of the dead but in an unusual gender-swap perspective. The women are not only avenging their men—and by extension, all the doomed of an African generation who have suffered or died in their attempts to migrate—but in a sense actually become them. Ada’s last words in the film, as she faces herself in the mirror, feels a little awkwardly on the nose: “Ada, to whom the future belongs—I am Ada.” But you can’t deny that Ada and Diop have earned the right to reach this point, and besides, there’s much subtler stuff happening on the way there—not least in the calm defiance of Mama Sané’s performance, her cool, measured directness nicely offsetting the slippery unpredictability of Diop’s fiercely imaginative debut. Article from the November-December 2019 issue

By Sierra Pettengill
In her score for Atlantics, Fatima Al Qadiri conjures up mesmerizing, moving sounds from the deep Article from the July-August 2019 issue Article from the May-June 2000 issue

Article from the November-December 2019 issue

By Sierra Pettengill
In her score for Atlantics, Fatima Al Qadiri conjures up mesmerizing, moving sounds from the deep

Article from the July-August 2019 issue

Article from the May-June 2000 issue