There’s a photo, taken by Juergen Teller in 2002, of Asia Argento and Savannah Knoop on a beach together. At the time, Knoop was in the thick of the six years they spent embodying the feral, androgynous literary wünderkind JT LeRoy. LeRoy did not actually exist. He was just a pen name for Knoop’s sister-in-law, the writer Laura Albert. In a literary scandal for the burgeoning Internet age, Albert paid Knoop to act as her teen-boy avatar, dolled up in a tacky blond wig and oversized sunglasses. During this period, Albert promoted two acclaimed novels and penned a short story for this very publication. The whole scheme imploded in late 2005, in a series of exposés written in New York magazine and The New York Times. In the photo, Argento is characteristically uninhibited; her arms and legs flung in a lopsided Christ pose, her near-naked body streaked with sand. You have to look a bit harder for Knoop. Crouched in negative space, dressed all in black, they could almost pass as driftwood. A jaundiced contortionist would envy Knoop’s talent for minimizing them in the frame.

The same cannot be said for Kristen Stewart, who portrays Knoop in JT LeRoy, a retelling of the haute tabloid calamity from director Justin Kelly. Stewart is at her best, as she is in this film, when allowed to channel the caffeine-manic neurosis of her public persona into her roles. She’s all anxious tics, darting eyes, extempore interjections. Even under JT’s haphazard, lumpy disguises, it’s difficult to imagine her as anything other than the center of attention.

Now in their late-thirties, Knoop is gender neutral and using they/them pronouns. They co-wrote the film, adapting it with the director from their own 2008 memoir. JT Leroy pointedly presents an opposing perspective from Jeff Feuerzeig’s 2016 documentary Author. Narrated by Laura Albert, that film seldom mentions Knoop, referring to them only as the “body” which Albert could give her creation. Knoop and Kelly return the favor, writing Albert (Laura Dern) as a fraught bundle of eccentricities who eludes further analysis. She dispenses her motivations in the form of a dryly written and performed expository monologue that might well have been culled from an official, 300-words-or-less author bio. Dern succinctly and mechanically details Albert’s past: while living in a group home she would call suicide hotlines under the guise of made-up male characters as she felt it caused people to take her more seriously. The rest of the film sidelines Albert, playing Dern as a comical nag whose volume and jealousy are continually dialed up. This careless skewing of perspective oversimplifies Albert, in reality a fascinating, infuriating, and inarguably talented person, but it also makes it clear that this time Knoop is in focus. The body speaks.

Gender-neutral or non-conforming representation throughout film history leaves much to be desired. It’s typically scraped from cross-dressing and body-swap comedies to be recontextualized. A prime example is Katharine Hepburn, hunched and bow-tied in Cukor’s Sylvia Scarlett (1936) being included in the trans pantheon. JT LeRoy makes passing gestures toward Knoop’s gender non-conformity, delivered as clipped, cryptic asides from a sad-eyed Stewart, in medium shots that linger just long enough to suggest something. “What if you wake up one morning and want to be somebody else?” Dern espouses in an early scene. “Well, yeah, I… know that feeling,” Stewart replies. Later, Dern chirps, “You’ve got all of these selves inside of you… it feels so good to not be in this body,” to which Stewart offers a drawn out “…I get that…” When Knoop continually refuses food that would “give [them] curves,” the film shrugs dismissively as to whether this suggests their commitment to the part, their dysphoric body, or the eating disorder that both Knoop and Albert shared in real life. Stewart’s talent for pregnant hesitation, words burbling in her brain but failing to materialize in any articulate way, is well-suited for portraying dysphoria. I immediately recognized the disquieting itch of not having the language to express one’s misalignment with the rules and regulation of gender. It can feel a bit like circling a landing strip in an eternal holding pattern; each descent a nonverbal strive for physical comfort, but never a conclusive arrival. It’s a deficiency of something undefined, always dwelled upon but near impossible to coherently explain when coming out to friends, lovers, or therapists. Stewart’s knowing portrayal of this intimate itchiness is a tiny corrective, perhaps, but a necessary one. There’s plenty about the JT LeRoy narrative from a queer perspective that, while eaten up by the media and arts stars of Y2K has rotted since. Albert’s characterization of JT as a “survivor”—arguably to elicit sympathy and attention for herself—extended to her writing that JT had survived a botched sex-change operation and contracted HIV. In Author, when news of Albert’s deception began to leak, her partner Geoff Knoop is heard sighing, “the trans community is gonna fucking lynch you.” Asia Argento’s adaptation of The Heart Is Deceitful Above All Things portrays JT’s gender confusion being foisted upon him by his fiery truck-stop sex-worker mother (played by Argento), a near-biblical figure who smeared his face with lipstick and called him a “beautiful girl.” Needless to say, suggesting this as an exemplary trans narrative is not only harmful but also painfully dumb. JT LeRoy occasionally missteps, continually drawing eye-rolling parallels between gender dysphoria, eating disorders, and Laura Albert’s dissociation, but at the very least it shies away from making an ugly spectacle out of transness, unlike Albert’s writing and Argento’s film.

“Gender is a bit of a myth if you ask me,” Kristen Stewart said in a Canal+ video interview at Cannes last year, her sneaker kicking anxiously and her expression animated. Proclaiming that she would “totally” play a man, she continued, “everyone’s individual relationship with gender is totally theirs to define.” Since she began to publicly acknowledge her queerness, Stewart has become a sort of public conduit for queer joy; a larger-than-life idol for the decidedly meeker of us to live vicariously though. JT LeRoy follows quickly on the heels of the actress playing the lover of noted axe-wielding romantic Lizzie Borden, and several photos of the 2018 Cannes jury in which Stewart, with short-cropped hair and a blue suit, is seen sizing up Cate Blanchett with an insatiable delight (perhaps a more worthy nominee for the Queer Palm than some of the actual filmic competitors). “She makes every movie she’s in gay,” my friend said in awe after seeing JT LeRoy. It’s true. Stewart as Knoop is so effervescently gay, enthusiastically delving into the gender-bending role of JT. She is equally believable in her yearning for Diane Kruger’s Eva, the film’s nod to Argento.

The film’s best scene is a campy, fumbling re-creation of Knoop’s first photo shoot as JT, with Albert dressing up as her secondary character “Speedie,” JT’s friend and manager with an ear-splitting cockney accent. It’s hammy and haphazard and shot handheld, showcasing the movie’s two best qualities: Dern’s scenery chewing and Stewart’s increasingly ridiculous art rat outfits. In the lead up to the sequence, Knoop stares into a mirror, listening to a recording of Albert as JT and wrapping an ace bandage around their chest. The shots are patient and sensitive to the details of the process. The scene recalls another Kristen Stewart performance, in Olivier Assayas’s Personal Shopper (2016), in which Stewart’s boyish Maureen gives into temptation and tries on the harness that she bought for her haughty boss. Surveying her body in the restrictive clothing, Stewart starts jerking off, seduced for a moment by the feminine version of herself. Personal Shopper otherwise shows very little interest in gender and sexuality, but Kristen Stewart once again queers the room. In Knoop’s memoir Girl Boy Girl they recall that moment, wrapping the bandage in front of the mirror, and feeling “exhilarated.” In these brief shots, Stewart manages to convey this exhilaration. I felt a warm tug of familiarity, like the binding pull of tight clothing: the feeling of learning to control and modify your own body.

Mackenzie Lukenbill has programmed films for NewFest, Interference Archive, and the Spectacle Theater and written for MUBI, Screen Slate, and Impose Magazine. By Nick Pinkerton and C. Spencer Yeh
Hello darkness: a conversation about Avengers: Endgame, genre, and the homogenization of the multiplex 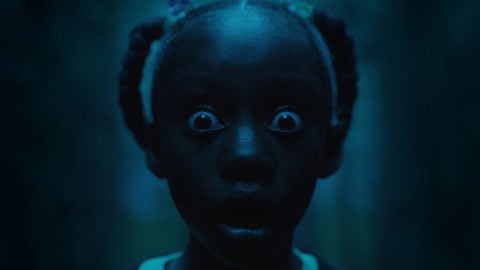 By Nick Pinkerton and C. Spencer Yeh
Hello darkness: a conversation about Avengers: Endgame, genre, and the homogenization of the multiplex

By K. Austin Collins and Devika Girish
Face off: a conversation about Jordan Peele’s Us and issues of horror, race, class, and criticism itself
Subscribe to the Magazine