In the opening paragraph of Arthur Conan Doyle’s “The Adventure of the Second Stain,” Dr. John Watson explains that his friend Sherlock Holmes “has definitely retired from London and betaken himself to study and bee-farming on the Sussex Downs.” In the moving yet perilously fragile Mister Holmes, director Bill Condon and his incandescent star, Ian McKellen, pick up with Holmes in 1947, roughly three decades after his retreat to his Sussex apiary. He’s become an expert on royal jelly—the secretion of worker honeybees that nourishes all larvae and in concentrated doses creates queens. He’s included it in his own diet, hoping to restore his faltering mind. At 93, he pursues every feasible panacea for the ravages of aging. At the movie’s start, he’s returning from a trip to Japan with a long-sought sprig of prickly ash, which may also have curative powers.

Whether with royal jelly or prickly-ash jam, Holmes aims to revive his memories of his disastrous final case. Back in 1919, Watson recorded Holmes’s attempt to crack the murder of an innocent, depressed housewife. He treated it as Holmes’s climactic triumph—the Great Detective going out with a bang. Now Holmes doesn’t believe that the case was even a homicide; he’s convinced that Watson, loyal to a fault, altered both the facts and the truth of the matter. Holmes feels in his gut that he failed this beautiful woman and knows in his bones that this defeat propelled him toward retirement. He desperately wants to recall the crucial details and put them down on paper, without embellishment.

No one has embodied the presence of an absence better than McKellen as the nonagenarian Holmes, who racks his brain for details of a professional downfall—and instead discovers the missing ingredients of his life. (The presence of absence is a key theme of Mitch Cullin’s 2005 source novel, A Slight Trick of the Mind.) McKellen conveys the latent urge for lyricism in a man who has always thought that logic must be paramount whether confronting high-stakes crime or everyday mortality. The actor is equally magnetic and original in flashbacks, as the spruce 65-year-old who spryly and arrogantly embarks on resolving what seems to be a case of marital misunderstanding. 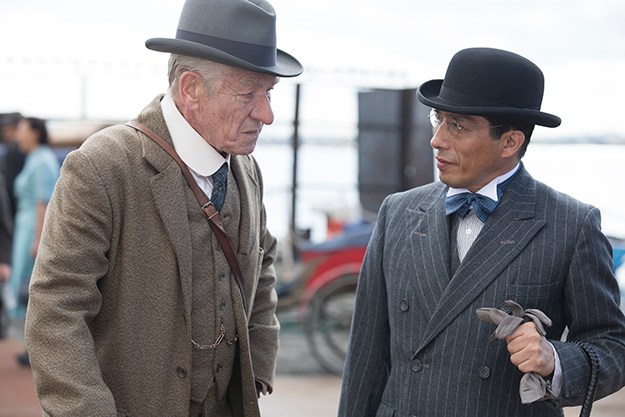 Condon’s elegant counterpoint of the two ages of Holmes enables McKellen to revise the character without undercutting his grandeur or devaluing his intellect. What ultimately helps Holmes achieve clarity is not some exotic herb or apiary product, but human contact. His new Japanese friend, the dapper, emotionally needy Tamiki Umezaki (Hiroyuki Sanada), both inspires a fresh avuncular impulse in Holmes and provokes him into considering whether kindness and generosity might justify blurring fact and fiction the way Watson always did. And 10-year-old Roger Munro (Milo Parker), the son of his widowed housekeeper, Mrs. Munro (Laura Linney), awakens Holmes’s capacity for mentoring.

Mr. Holmes is as touching as it is peculiar—a minor movie spiked with major pleasures. Rather than a surging mystery or a scintillating Conan Doyle pastiche, it’s a bedtime story for grownups about the delayed getting of wisdom. Screenwriter Jeffrey Hatcher (Stage Beauty, Casanova) transforms the novel’s discursive depiction of Holmes’s late-blooming empathy into a crystalline fable of his journey from preening ratiocination to big-hearted humanism. Hatcher and Condon adopt E.M. Forster’s credo, “Only connect!” Their Holmes must release his untapped ardor, join it to his dazzling intellect, and “live in fragments no longer.” Apart from McKellen’s staggeringly compassionate performance, the film rarely unites “the prose and the passion,” so “both will be exalted, and human love will be seen at its height.” But it makes a bewitching and invigorating try.

The graceful conceit of Mr. Holmes is that Conan Doyle’s creation is a real historical figure bemused by his own myth. He wears a top hat instead of a deerstalker cap (an illustrator’s invention) and prefers cigars to pipes (though he did enjoy smoking his brierroot until Watson turned it into a trademark). In his prime he was a consummate cocky genius. But even in his dotage, when he must jot names on his cuff to remember close associates, he remains a charismatic and bedeviling figure. In the present-tense action of Mr. Holmes, McKellen imbues the doddering Holmes with urgency and stature. His intense concentration doesn’t suggest mere cogs turning in the mind but an artist of ideas struggling to regain his lucid vision. And in the main flashback sections, McKellen embodies an imperious champion of deduction. Momentous quests catalyze each section of this movie. In flashbacks to Japan (set earlier in 1947), Holmes’s search for prickly ash is also a hunt for signs of life in a devastated country. At the heart of the 1919 flashbacks is the grieving housewife Ann Kelmot (Hattie Morahan), who resists falling back into her placid domestic role after suffering two miscarriages. Her husband, Thomas (Patrick Kennedy), hires Holmes to get to the bottom of her enigmatic comings and goings. They must fathom the depth of her attachment to the music of the glass armonica: graduated bowls mounted on a shaft, spun with a treadle and played by touch. The instrument’s otherworldly tones just might enable players like Ann to summon the dead.

Hatcher and Condon set up parallel narratives that should resonate like the bowls in that armonica. From the witty opening scene of Holmes stuck in a train compartment with a willful boy and a protective parent, the filmmakers people their movie with watchful or grief-stricken wives and mothers, absent or oblivious fathers and husbands, and spirited, upstart sons. Umezaki mistakenly believes that Holmes knew the father who abandoned him. Mrs. Munro lost her husband when he jockeyed to join an RAF bomber crew instead of staying with his buddies in the motor pool. She fears that she’ll lose her son’s devotion if Holmes enflames his intelligence and imagination.

No matter how exquisitely Condon arranges them, these subplots fail to generate emotional sweep or trigger profound reverberations. They’re either too florid or too basic. The Japanese flashbacks are full of forced visual poetry—images like prickly ash sprouting in a ravaged Hiroshima garden can’t carry their symbolic weight. And though Mr. Holmes hinges on familial and romantic love, it proves thin on ecstasy, excitement, or rage. As Condon demonstrated in his previous collaboration with McKellen, Gods and Monsters (98), this director knows how to plant complex, intimate comedy-drama in textured period settings and to refresh cultural icons, whether Sherlock Holmes or Frankenstein’s monster. But Gods and Monsters is all of a piece and develops cumulative power. Mr. Holmes works only in fits and starts. It’s supposed to be ironical and heartbreaking that there’s barely a puzzle in sight. Holmes resolves the conundrums that do come with simple, straightforward observations. The film’s true riddles, though, are meant to be emotional. “The revelation of our Mr. Holmes,” McKellen said in a Guardian webchat, “is that the real Sherlock is full of self-doubt and capable of learning to like and even love other people.” Holmes learns that he botched the Kelmot affair because of his inability to connect with Ann, a woman yearning for a kindred spirit—someone as alienated and perceptive as himself. His relationship with Roger, who becomes a reliable and even heroic beekeeper, proves to be his late-in-life salvation.

The moviemakers don’t work out these developments with a style or brilliance that feels specifically Holmesian. Wags have already dubbed this film Still Sherlock, but even Julianne Moore’s Alzheimer’s-afflicted college professor in the clinical Still Alice strove to find more distinctive ways to take charge of her destiny than writing herself notes or researching holistic cures. We in the audience know that age humbles everybody. Nonetheless, we want to see this paragon of intellection pull more tricks from his sleeve than names scrawled on a cuff.

Happily, Condon’s craftsmanship and deftness with performers, and Hatcher’s gift for patterned melodrama, often come together with a sneaky force. Condon and Hattie Morahan convey Ann’s maternal deprivation through simple, eloquent means. For example, he dissolves from Ann surveying her nursery, with its rocking horse and giant abacus, to the room emptied and stripped of purpose. Condon parodies Basil Rathbone vehicles like The Woman in Green with a funny film-within-the-film, Sherlock Holmes and the Lady in Grey, replete with acting and editing that italicize every moment. It’s delicious but also self-defeating, bringing home to the audience that Mr. Holmes could use some B-picture momentum of its own. (The Adventures of Sherlock Holmes, an A picture starring Rathbone, remains the sharpest Holmes movie ever made, far spunkier than Rathbone’s deluxe debut in The Hound of the Baskervilles, and the most neglected great entertainment of 1939.) 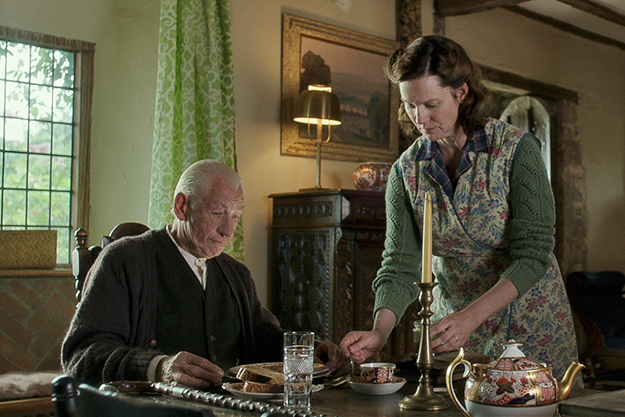 But even when its energy fades, Mr. Holmes is artful and appealing. Linney brings much-needed strength and cunning to the wary, skeptical Mrs. Munro, and young Parker is a revelation as her son—precocious rather than cute, and equally empathetic and cutting. When he yanks at his mother’s apron strings, the movie is as much about the cheerful cruelty of youth as it is about the ruthlessness of age. McKellen partners with each of them beautifully. He and Linney turn Holmes and Mrs. Munro into virtuoso kitchen-table combatants. When she declares that his jar of prickly-ash extract “looks like it came out the down-spout,” he sagely replies, “It came from Japan.” “That makes all the difference,” she notes with airy irony.

McKellen and Parker summon all the mischief and joy possible when a protégé surprises his mentor with unexpected humor and intelligence. They conjure a marvelous mood of male conspiracy and become bona fide cross-generational comrades. Roger has some of the best lines in the movie, and Parker delivers them to perfection. The boy tries to reassure Holmes that he has many years left; after all, Roger had a great-uncle who lived to be 102. “Well, then, that seals my fate,” says Holmes. “What are the odds that you would know two men who lived that long?” “Well,” Roger answers, “I didn’t actually know him.”

Because of McKellen, we do know Sherlock Holmes. As Gandalf in Peter Jackson’s Hobbit and Lord of the Rings trilogies, he led dwarves, hobbits, and elves to vanquish hordes of orcs and goblins. As Magneto in four of the X-Men films, he outwitted fellow mutants and outlasted robot and human nemeses. But at age 76, McKellen has pulled off his mightiest movie feat—and he’s done so in a single, modest production. He persuasively embodies a cerebral genius who experiences sudden bouts of pungent feeling while battling mental and physical enfeeblement. He enlarges our vision of a classic hero by adding humanity to deduction. Deep Focus: The Hobbit: The Battle of the 5 Armies

Deep Focus: The Hobbit: The Battle of the 5 Armies