In 1964, Bel Kaufman, a middle-aged, Berlin-born New York City schoolteacher, published her first novel, Up the Down Staircase. It was the story—told innovatively in notes, memos, essays, fragments, suggestion-box insults, and jottings—of Sylvia Barrett, an idealistic young woman getting her first taste of the realities of working in a rough-and-tumble, ethnically mixed urban public school. The novel was an instant success, selling 1.5 million copies within the first month of its publication. A movie sale was a natural, and within the context of that mid-’60s moment when urban blight, the shaping of young minds, and the uphill fight against systemic entropy (no matter what the system) were frequent magazine-cover topics, director Robert Mulligan and producer Alan J. Pakula (who hadn’t yet stepped behind the camera) couldn’t have been more apt choices to shepherd the story to the screen. Mulligan and Pakula, both around 40, were socially conscious filmmakers who had teamed on five movies over the previous decade; they had dealt with race in To Kill a Mockingbird (1962), abortion in the Steve McQueen/Natalie Wood comedy-drama Love with the Proper Stranger (1963), and (tentatively) homosexuality and suicide in Inside Daisy Clover (1965).

Experienced with casting young female leads, they chose Sandy Dennis, who was virtually unknown to moviegoers at the time of casting but whose breakthrough film, Who’s Afraid of Virginia Woolf?, would open while Up the Down Staircase was in production and win her an Academy Award by the time Staircase was released the next year. The film was a major hit in the summer of 1967; it served as a kind of race-and-gender-reversed complement to the very successful To Sir, with Love, which opened at the same time. But instead of Sidney Poitier winning over a bunch of tough London kids, it presented a more balanced battle: would Sylvia’s students (or her colleagues) break her down or toughen her up?

Impressively shot by Joseph Coffey, a little-remembered cinematographer with only three feature credits, Up the Down Staircase is one of the first ’60s movies to look like a ’70s movie. The locations are real—it was shot in high schools in Harlem and in the then-blighted area just west of Columbus Circle and south of the brand-new Lincoln Center campus. (The movie is a treasure trove for urban archaeologists who want a street-by-street record of New York’s development, even if Dennis sometimes seems to teleport two miles to the south or north simply by rounding a corner.) The color is desaturated; the streets, with their boarded-up, graffitied shopfronts and cracked pavements, steam with a Lumet level of grime and squalor, and the camerawork is as jittery as Dennis herself as it follows her down the street. Under Mulligan’s sensitive guidance, she anchors the film—and she has to, since, although Mulligan and Pakula filled out the adult cast with pros like Eileen Heckart, Ruth White, and Jean Stapleton, they had cast amateurs to play the high school kids. Their lack of polish is evident but also effective; Staircase is no documentary, but their non-movie-star faces and untrained line readings have a moving innocence that conveys its own form of realism. And while the movie can’t match the blunt unsentimentality of some of Kaufman’s writing (she fought her publisher, successfully, to get a single use of the word “fuck” into the text), the film feels just real enough so that, watching it 50 years later, one can imagine those kids in actual Manhattan high schools. Which many of them were. Mulligan and Pakula lured them into service over their summer vacations, paying them between $12 and $27 a day as extras or $350 a week as principal actors. In the spring of 1966, as production approached, it all got a little too real for the city’s Department of Education, which threatened to withhold cooperation out of fear that, according to a New York Times report, “the film would present a derogatory picture of the city’s school system.” But the studio—and, as it turned out, all filmmakers—found a champion in John V. Lindsay, the liberal Republican (later Democrat) who had just been elected mayor and was determined to bring film production to New York and eradicate the institutional roadblocks that had long caused filmmakers to look elsewhere. As he had recently done for Francis Ford Coppola’s You’re a Big Boy Now, which successfully lobbied the city to shoot in the New York Public Library, Lindsay overrode bureaucrats and revolutionized film production in New York in a way that still resonates today, creating special police units to assist filmmakers, streamlining applications to shoot on the streets, and instituting a new policy that, as one report put it, “in the future, no film project will be denied a permit by a city department on the grounds that the film will be unflattering to the city.”

Critics were split. Some, like Roger Ebert, were encouraged by any studio film “that might be concerned, even remotely, with real experiences that might once have happened to real people. And we need more actresses like Sandy Dennis, who looks as if she may be alive and not a plastic robot turned out by the little elves who constructed Doris Day and Sandra Dee.” But others complained it didn’t go far enough. Joe Morgenstern, then at Newsweek, wrote that the movie “tiptoed timorously around the crazy chaos of American slum schools,” and in the Village Voice, Andrew Sarris called it a “failure for asking questions it was afraid to answer.”

Kaufman herself was pleased with the picture; she was invited to screen it in Moscow, where an audience of hundreds was enthralled. (She also returned to an astonishingly long dual career of teaching and writing, continuing to do both until shortly before her death in 2014 at 103.) The movie—and her novel—are unquestionably products of their time, and both contain compromises that reflect rapidly changing rules about what was and was not permissible. The book could make reference to a student who died after attempting a self-inflicted abortion with knitting needles; the movie could not. On the other hand, the movie could flesh out, at least somewhat, the character of an African-American student who, in the pages of the novel, comes off as clichéd and underimagined. Up the Down Staircase remains a fascinating snapshot of an evolving film culture and of an evolving city, as revealing for what it can’t show as for what it can. And while it makes an obvious double feature with the much glossier (and sillier) To Sir, with Love, I’d suggest another pairing: watch it with Frederick Wiseman’s 1968 documentary High School, which is the real thing packed into 75 essential minutes.

How to see them: Up the Down Staircase is available on DVD and streams on Amazon, GooglePlay, iTunes, Vudu, and YouTube, as is To Sir, with Love. High School is also available on DVD. 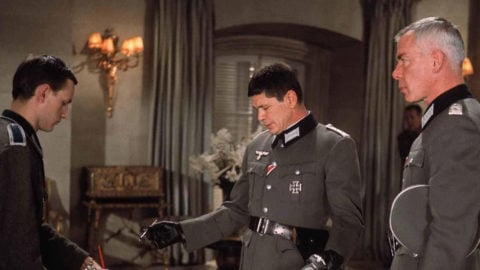 By Mark Harris
Mad about you: Philippe de Broca’s anti-war cult classic put the inmates in charge of the asylum

By Mark Harris
Mad about you: Philippe de Broca’s anti-war cult classic put the inmates in charge of the asylum
Subscribe to the Magazine