In Our Time: Abbas Kiarostami’s 24 Frames The family relationship between still photography and film is intimate and rivalrous; each, at times, seems to envy the qualities that are unique to the other. The Iranian director Abbas Kiarostami was also a dedicated photographer, as well as an accomplished painter and illustrator. “I’ve often noticed that we are not able to look at what we have in front of us,” he said, “unless it’s inside a frame.” A narrative is also a kind of frame; a filmmaker not only composes shots but decides what to include and what to leave out of the story. Kiarostami spoke of moving in his work toward a kind of minimalism, believing in “a method of creation through omission, not through addition.” Why not pare everything down to one silent and motionless image, then? But some nagging doubt pulled the opposite way, perhaps prompted by the other film-specific meaning of “frame”: the individual photographs that, running past the projector at the right speed, create the illusion of motion. In a statement that precedes what became his final film, 24 Frames, Kiarostami speaks of wondering whether reality can be captured in a single frame, and setting out to add motion to some of his own still photographs, transforming them into brief vignettes of around four minutes each.

It is a curious enterprise. Kiarostami could, of course, simply have shot films instead of photographs: the magic trick of making pictures move was mastered well over a century ago. Instead, he chose a different route: working closely with collaborator Ali Kamali, he used digital animation to add layers of action to the original pictures. The result has a ghostly, unreal quality, a constant reminder that what you are watching is painstakingly crafted and imagined, not recorded. But while the technology employed is cutting edge, the inspiration seems to spring from something basic at the core of movies: the feeling that still pictures are not enough, the desire for a more complete simulacrum of life. Slow and wordless, meditative and at times hypnotic, 24 Frames provides an opportunity to ponder what duration adds—or subtracts—from a still picture.

To illustrate its method and conceit, the film opens rather audaciously by animating Pieter Brueghel’s iconic painting “The Hunters in the Snow.” The effect is gradual, subtle and restrained: first smoke rising from chimneys, then crows taking wing, snowflakes falling, finally a dog trotting around and some cows passing, all accompanied by appropriate sound effects. The painting’s central figures do not move: there is no attempt to inject a narrative, only to bring life and movement, and normal change over a span of time. 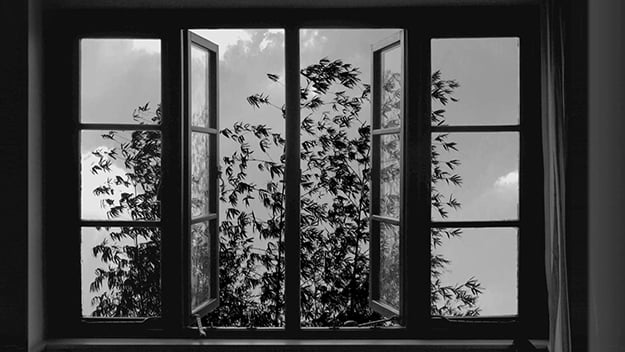 This first experiment introduces the techniques and the spare, austere sensibility that will be carried through the film. The Brueghel painting also proves to be the theme on which many of the subsequent “frames” will be variations: crows and other birds appear over and over, as does snow, and the mute world of animals. Many of the pictures are of such monochromatic subjects that it is difficult to tell whether they were shot in color or black and white; when color does appear it is mostly muted. Several of the images are framed by a window, through which we watch a tree blowing in the wind or birds squabbling or cars and motorcycles passing on a city street. Once, the frame is a car window that rolls down, presumably to allow the photograph to be taken. People appear in only two of the frames (three, counting the Brueghel), though their presence is often suggested through sound or off-screen action—including the implied presence of the photographer. Kiarostami said that he was trying to imagine the moments before and after his shutter snapped and isolated a single instant; to put the frozen image back into the flow of time.

Snow or rain falling, surf rolling in, wind rustling through tree branches, all set a dreamy mood. Herds of cattle or reindeer pass in endless lines; sheep huddle against the cries of wolves; deer graze in clearings; horses gallop in the snow; crows alight, look around, fly off again. The action is often repetitive, developing gradually like a minimalist composition. Despite the haiku-like subjects, there is something reminiscent of the earliest forms of cinema, which were simply snippets of the world in motion: “actualities” of crowds or traffic; or the brief, endlessly repeated actions of zoetropes; or Eadweard Muybridge’s studies of animal locomotion. The repetitions and the variable effectiveness of the frames suggests experimentation, a series of attempts to capture an elusive concept. It is no surprise that a director who muddied boundaries between documentary and fiction, and often focused on the act of making films, continued exploring new forms to the end. He seems to be making sketches, feeling his way in what is essentially a brand-new medium.

To compare the short films to poems is perhaps facile, though fitting for a man who was also a prolific poet. They are never stories, but sometimes the vignettes have a climax: a shot felling a deer or a seagull, a cat catching a bird, a black flag falling over on a beach. This recurring appearance of death or collapse culminates in the penultimate frame, in which two bare trees stand behind a stack of firewood; the sound of a chainsaw grows louder, until the two trees, one by one, shiver and topple. Sound sometimes conveys what is happening that we can’t see, as with the chainsaw, or with a frame that begins with soft shadows against a window-blind, accompanied by sounds of someone unlocking a door and entering a room, followed by the blind lifting. Music either supports or counterpoints the mood of the images: Puccini’s painfully beautiful aria “Un Bel Di Vedremo;” film composer Joseph Kosma’s chanson “Les Feuilles Mortes” (“Autumn Leaves”) sung by a busker in one of the few urban scenes with people; tango music underscoring the pas de deux (or is it a fight?) between two horses. 24 Frames is a posthumous film. Kiarostami worked on it over the course of three years, and when he died in 2016 the nearly-finished film was completed under the supervision of the director’s son Ahmad Kiarostami. These circumstances give an added weight to the repeated images of death, to the haunting presence of crows and the pall of snow. The final frame alone directly addresses cinema: the last shot of William Wyler’s The Best Years of Our Lives (1946), a kiss between Teresa Wright and Dana Andrews, appears on a computer screen in a darkened room. A woman is slumped on the desk in front of it, her black hair in disarray; the screen is in front of a large window, which shows trees at night bending and keening in the wind. The kiss is slowed down—a few seconds stretched to four minutes—reversing the process of the film as a whole. It looks at first like a still: Wright’s radiant face haloed by a large picture hat, Andrews’ profile turned away from the camera; they come together almost imperceptibly, with her hat falling off in a swooning climax. I wish this frame were not overlaid by a bombastic rendition of Andrew Lloyd Weber’s “Love Never Dies,” but despite the heavy-handed music cues, this scene, with the night wind, the recumbent woman, the kiss caught out of time, is a lovely and mysterious evocation of cinema as at once intimate and interior, and opening onto the vast and wild.

“The only way to change things is to look at everything again very slowly,” Isabelle Huppert says in Hong Sangsoo’s Claire’s Camera (2017). This line, perhaps the most penetrating in a slight but charming film, seems to aptly describe what Kiarostami is doing. (It also recalls the miracle of Agnès Varda and JR’s Faces Places [2017], in which large-format photographs, laboriously mounted on buildings and other structures, become a radical act of love by seeing, magnifying, and honoring the everyday.) Hong’s film is set in Cannes, where by chance the paths of two women cross: Manhee (Kim Min-hee), a Korean employee of a film distributor working at the festival, and Claire (Huppert), a visiting French school-teacher who likes to take photographs. She insists that when she takes someone’s picture, he or she is changed. Her camera makes Polaroids, which she often gives to her subjects. We don’t really see the pictures themselves, only people’s reactions to them. It is the action of taking them that counts, representing Claire’s rigorous attention and unobtrusive curiosity, which over the course of the film both uncovers and perhaps heals the personal and professional entanglements of Manhee and her Korean co-workers.

Photography shows us things invisible to the naked eye, whether it is the moment when a galloping horse takes all four feet off the ground, or a murder in a public park, or just a facial expression too fleeting to catch. When Kiarostami took the original photographs, he was presumably trying to capture something in the world: the hunting motif, from the Brueghel painting through the animals being shot, might also be a metaphor for photography itself. By digitally elaborating on these images, it seems he is trying to paint something seen in his mind’s eye, a memory or an imagined scene. This mixing of the real and the unreal is summed up in that final image: a photograph of a film, or rather a film of a photograph of a film, suspended between stillness and motion, between watching and dreaming.

“It is the artist who tells the truth and photography which lies,” the sculptor August Rodin declared, “For in reality, time does not stand still.” The image that wound up being Kiarostami’s last suggests that on the contrary, time can stand still, and this is a truth the artist know and the machine—be it a camera or a computer—merely helps him illustrate.

24 Frames continues its run at the Film Society of Lincoln Center through February 15. By Jordan Cronk
Another round: the idiosyncratic and increasingly prolific Korean filmmaker discusses his two films at Cannes this year, Claire’s Camera and The Day After
Subscribe to the Magazine