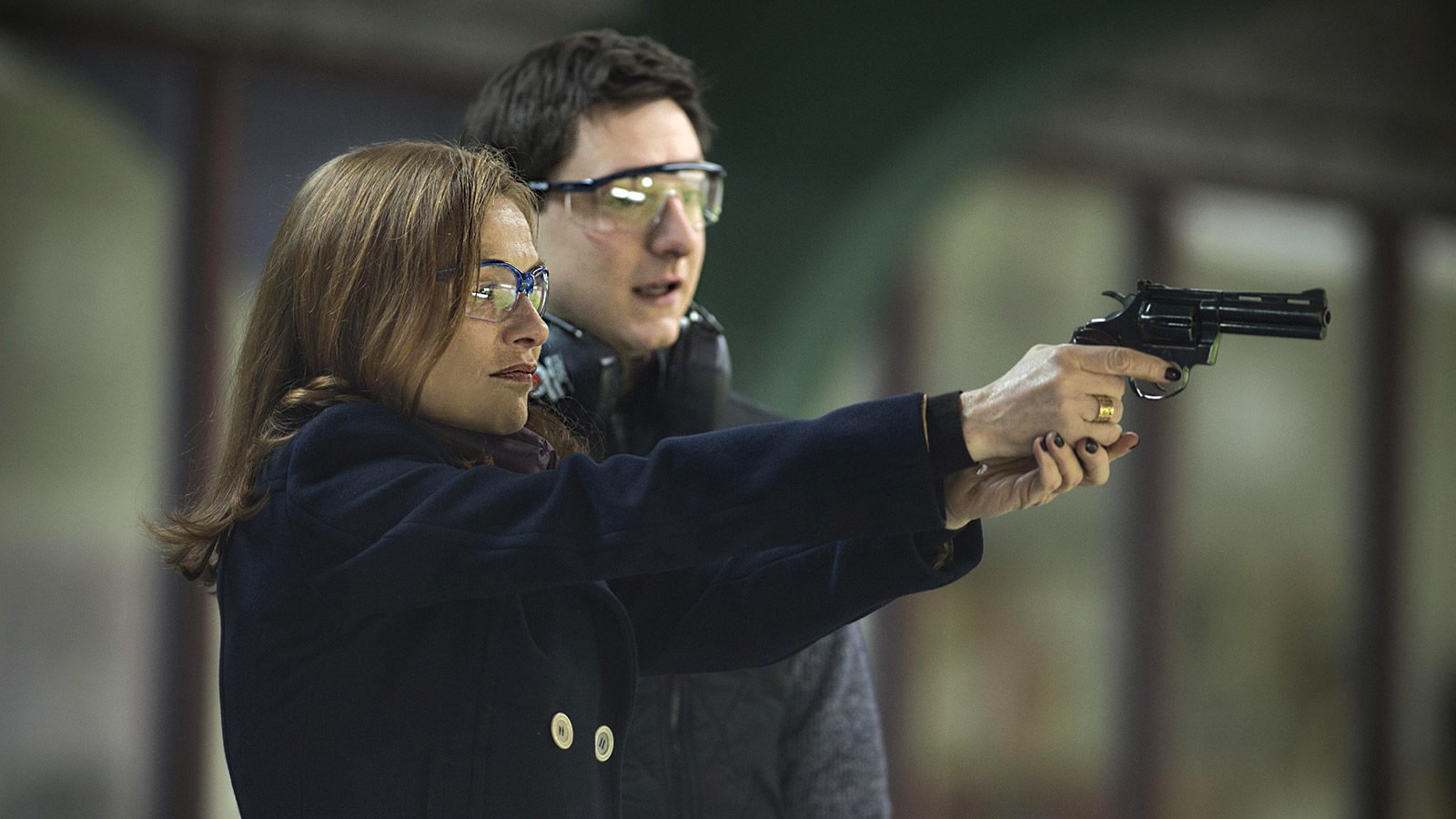 By Dennis Lim in the July-August 2016 Issue

Paul Verhoeven’s up-and-down career has accommodated several cycles of derision and rehabilitation. His most notorious films started out as punching bags (or punch lines) before being reclaimed as misappreciated critical causes. But no redemption seems necessary with Verhoeven’s first feature in a decade (and his first in French), Elle, which emerged in the home stretch of this year’s Cannes Film Festival as an unlikely favorite among the press corps. Is the audience no longer shockable? Or are these simply more compatible times for this instinctive provocateur’s brash cynicism, blithe amorality, and nothing-is-sacred worldview? On paper, Elle would seem to be one of Verhoeven’s more incendiary concoctions: a wry, almost-screwball comedy of manners about one woman’s rather unusual response to a rape. Adapted by David Birke from the French novelist Philippe Djian’s Oh… (and conceived as an English-language film before Verhoeven was turned down by every American actress he approached), Elle begins in extremis, amid screams and grunts, as we first hear, then see, Michèle (Isabelle Huppert) being brutally violated in her kitchen by a hooded intruder (her cat watches, along with us). In the aftermath, she calmly sweeps up the mess, takes a bubble bath, orders in sushi. Is she in denial, or is the film suggesting that, for Michèle, being raped was no big deal? As a more conventional film would, Elle goes about unmasking and punishing the perpetrator, but it takes a circuitous route there, via a push-pull mind game of domination and submission and an exploration of sadomasochistic desire that ranks with Blue Velvet in its black-comic audacity.

In a festival that began with a rape joke at Woody Allen’s expense (by opening-ceremony host and Elle star Laurent Lafitte) and that featured competition titles (by Cristian Mungiu and Asghar Farhadi) in which sexual assaults serve as convenient plot instigators, Verhoeven’s film stood apart for the unflinching directness with which it addresses its central trauma. In fact Elle returns over and over to the rape, each time altering the dynamic between perpetrator and victim: first Michèle flashes back to it, rewriting it in her head as an avenging fantasy, then she effectively invites her attacker to reenact it. As with Verhoeven’s best work, Elle sustains a tension between the brisk certainty of the filmmaking and the ambiguity of its heroine’s actions and motivations. Michèle, no less resilient than the Holocaust survivor of Black Book (06), refuses the mantle of victimhood. Elle situates this contradictory woman within a constellation of personal and professional relationships: with her sexually avid mother, her ex-husband and clueless son, the female colleague whose husband she’s sleeping with, and the mostly male employees devising misogynistic scenarios at the video-game company she runs. What exactly this woman wants, thanks in no small part to Huppert’s impish performance, is a continual source of mystery and comedy. Verhoeven is often called a misanthrope, but it may be more accurate to consider him a gleeful connoisseur of human psychopathology; it is hardly a surprise that Elle, a veritable encyclopedia of wayward impulses and desires, is also his most playful and tender film.

Another taxonomist of unorthodox eroticism, Alain Guiraudie made his Cannes competition debut with his latest shape-shifting pastoral, Staying Vertical. In Guiraudie’s previous film and critical breakthrough, Stranger by the Lake, a cruising ground becomes a murder scene, an outdoor stage for the dueling forces of eros and thanatos. In the new film, sex and death merge even more sensationally in a setpiece that combines euthanasia, borderline necrophilia, and a blast of Pink Floyd-ish prog rock. This is but one out-there encounter in an oneiric odyssey for the protagonist, Léo (Damien Bonnard), a blocked filmmaker cruising the French countryside in his Renault, seeking inspiration for an overdue script and finding all manner of carnal stimuli. He’s drawn to a young man who lives with a much older custodian (possibly lover), and begins an affair with a shepherdess (India Hair), with whom he almost immediately has a child.

Guiraudie’s films are modern-day fairy tales, rooted in concrete glimpses of his native southwestern France but also given to free-associative flights of fancy. Staying Vertical cycles among a limited number of locations—farmhouse, pasture, a winding mountain road, a gray coastal town—as its characters rearrange themselves in an egalitarian diagram of desire. Guiraudie’s great subject, which his films engage in both content and form, is freedom, perhaps never more so than in Staying Vertical. Taking a sidelong look at what most other movies would flag as social issues—single parenthood, assisted suicide—the film also flirts with the mythic, in the interludes with a swamp-dwelling healer and the ever-present specter of the wolves roaming the periphery. The title has the ring of both a rallying cry and a dirty joke, though the film above all asks to be read as a rumination on what it means to be a human being, a vertical animal. The vast spectrum of life is here, from frontally filmed birth to ecstatic death, sex as the origin of the world (several shots overtly reference Courbet) and also the end. While the Cannes of today, with its club of pantheon auteurs, typically leaves little room for true discoveries—as Guiraudie’s That Old Dream That Moves was, back in 2001—the Critics’ Week, the one parallel section devoted to new filmmakers, had a strong year, and a most deserving winner in Oliver Laxe’s Mimosas (the film-within-the-film in Ben Rivers’s recent Morocco-set The Sky Trembles and the Earth Is Afraid and the Two Eyes Are Not Brothers). Laxe’s first feature, You All Are Captains (10), in which he played a version of himself, a filmmaker running a workshop for children in Tangier who stage a mid-movie mutiny, was at once a documentary of its own making and a restless metafiction about how narratives can be activated and reframed.

A more straightforward enterprise on the surface, Mimosas is a quest story and landscape study, drawing on Laxe’s time in Morocco and his immersion in Sufi mysticism. There is a similar sense of slippage as in Captains, albeit to more metaphysical ends. Shakib Ben Omar, who appeared in the second half of Captains as Laxe’s replacement, here plays an intense young man tasked with escorting a caravan to safety. Taking a taxi far into the desert, he seems to travel to another time as well. He joins a band of men on horseback—and the dead body they are transporting—on a trek marked by both physical and spiritual tests, through the treacherous, majestic terrain of the Atlas Mountains (captured on 16mm film by cinematographer Mauro Herce). A Western with shades of the uncanny, Mimosas has the openness of a parable: it doesn’t dramatize so much as embody the mysteries of faith.

Markers of time and place are also disorientingly absent in one of the festival’s genuine whatsits, Alessandro Comodin’s Happy Times Will Come Soon, which screened out of competition in Critics’ Week. The film proceeds in cryptic leaps: a long passage following two young fugitives in the wild, a series of talking heads recounting a local lupine folk legend, a loose dramatization of that myth, and so on. Comodin won admirers with his 2011 feature debut Summer of Giacomo, and this follow-up, though perhaps too obviously beholden to the likes of Lisandro Alonso and Apichatpong Weerasethakul, contained some of the most haunting passages of the festival. Happy Times also confirms that Italian cinema is particularly fertile ground for the productive commingling of documentary and myth, as most recently seen in Pietro Marcello’s Lost and Beautiful and Alessio Rigo de Righi and Matteo Zoppis’s Il solengo. The Death of Louis XIV

Albert Serra, one of the most singular and radical filmmakers working today, was accorded an out-of-competition slot in the official selection for The Death of Louis XIV, his latest foray into cinematic antiquity. Jean-Pierre Léaud, recipient of an honorary Palme d’Or at the closing ceremony, stars as the Sun King, slowly wasting away from gangrene in his candlelit bedchamber. A hushed, dilated, improbably absorbing counterpoint to any number of movie death scenes, filled with painstaking details gleaned from Saint-Simon’s memoirs and other historical texts, Louis XIV is about not just death but also its representation. The king’s was a demise performed in front of others, including a retinue of doctors prone to denial and misdiagnosis, and assorted courtiers and relatives, watching with rapt attention as the enfeebled monarch summons the effort to don a hat or take a nibble of a biscotto.

As darkly funny as it is moving, The Death of Louis XIV reveals the absurdity of these anachronistic rituals, but even more so of death itself. There is a certain poignancy in Léaud, now 72, synonymous with French cinema for over half a century, playing the longest-reigning French king in his final days. Gazing out from the most voluminous of wigs, barely speaking or moving for much of the film—staying horizontal, as it were—Léaud delivers a remarkable performance that concerns matters both grimly physical and dauntingly abstract. We see a body in decay but also sense the depletion of power, the evacuation of life. The Death of Louis XIV, winner of this year’s Prix Jean Vigo, is Serra’s most classical film as well as the clearest expression of his career project. His films bring the mythic past to life through a rejection of spectacle, by distilling events to the sparest of anecdotes and imbuing figures with the mundane weight of existence. In The Death of Louis XIV it is none other than death, the great leveler, that reanimates history as lived experience.