Make It Real: Form and Void

In Voyage of Time, Terrence Malick throws everything at us, and finds the wisdom in wonder

By Eric Hynes in the January-February 2017 Issue

As artistic acts go, it’s colossally hubristic. The culmination of years of filming and decades of preparation, Terrence Malick’s Voyage of Time—which premiered in feature-length and shorter IMAX versions in festivals last September—attempts to cinematically represent no less than the history of existence. From the big bang to suburban sprawl, from the evolution of the species to the devolution of the recorded image, Malick’s first work of nonfiction doesn’t lack for ambition, pursuing perhaps the biggest and unruliest whale of all. Or maybe it’s an elephant, to borrow from Manny Farber’s lexicon, stomping across a far more expansive terrain than the drilling of termites’ art.

These two variations (and, according to the director, at least two additional cuts await presentation) are as visually arresting as you might expect.  But the endeavor is also overwhelmingly, even weirdly scrupulous. How to represent primordial smears of intergalactic gaseousness? How to zoom into microscopic cell divisions? What inanimate movements or animal behaviors best exemplify each collective strive forward? Whether his tools are photographic, digital, or chemical, his vantage airborne, grounded, or underwater, Malick’s reach is true. Time progresses, represented through shots of consistently short duration—they’re never hasty, but tend to vanish the second you’ve bearings enough to savor them—with nothing resembling or functioning as B-roll. Their deployment is demonstrative, and effectively low-key emphatic: this, this, this, this, this; the cuts coming across as commas, not periods; the imagery lowercase but consistent, inexhaustible, and reliably remarkable.

Yet Voyage of Time, especially the 90-minute feature-length version, subtitled Life’s Journey, isn’t really declarative at all—at least not in sum. While it may unfurl as a series of statements, a progression of proofs for what is and has been, it’s actually webbed in doubt, uncertainty, and anxiety. The film is simultaneously more ambitious than any previous science or nature-oriented documentary—already a grand, even macrocosmic genre—and yet atypically humble and unstable. Physical evidence is undercut by subjective perception and irresolute emotion. It hasn’t the fictional narrative elements of Malick’s The Tree of Life, to which this film was apparently once considered a companion, though it remains a spiritually close sibling. Like precursors such as Planet Earth and Microcosmos, Malick’s film employs voiceover throughout. But unlike those and many others, with their stentorian Attenboroughs and Branaghs and Freemans, Cate Blanchett’s indeterminate address in Voyage of Time: Life’s Journey doesn’t underscore or explain what we’re seeing. It rather wonders why and how. It answers the science of what’s seen, with the philosophy, religion, and art of what isn’t and can’t be. It questions everything Malick has painstakingly captured, and conjectured. It confronts us with variations, not only in the IMAX versus theatrical sense (Brad Pitt’s VO in the former is indeed quite different, gesturing more directly, and less poetically, to what’s on screen), but in what we make of what’s there, what we’re capable of understanding based on the limitations of what we can take in. “Who brought me here?” asks Blanchett. “Where are you leading me?” “Will you abandon me?” Imagine a film beginning where 2001: A Space Odyssey left off, with Blanchett as the starchild amazed and terrified of the narrative she’s inherited.

A close spiritual and tonal precursor to Malick’s film is Carl Sagan’s Cosmos, the 13-episode series produced for public television in 1980. While perhaps an unlikely artifact of comparison to Malick’s Hollywood production, Cosmos is also outrageously ambitious, deigning to explore no less than everything out there, yet suffused with humility, following twinned impulses to know it all while acknowledging the limitations of knowledge. Granted, his endearing, nerdily Brooklyn-accented voiceover hasn’t the dramatic designs of Blanchett’s. But Sagan’s script does share a tendency to ground us even as the film visually takes flight. “We are made of star-stuff,” he says, typically both grand and folksy, during the preamble to a 1990 update of the series. “We are a way for the cosmos to know itself.” There’s a healthy dose of Milton in that phrasing, but it’s also infused with modern notions of scientific matter. We’re everything and nothing; we’re here but also hardly.

Both projects are in dialogue with the universe and with themselves, pitched inward even while addressing the outer reaches of infinity. “The nature of life on earth, and the quest for life elsewhere, are two sides of the same question,” Sagan says in episode two. “The search for who we are.” The same could be said of any quest, or line of questioning. And it could be said of any documentary as well, with filmmakers telling others’ stories, and watching others’ lives, as a way of making sense of their own. Yet rarely does this admission get placed in the foreground, and certainly not within this subgenre of science and nature films. The whole point, it would seem, is to convey, explain, and contextualize the world beyond us—not the world as it haunts and antagonizes us. But once you’ve heard that anxiety articulated, once you’ve heard Sagan liken humans to specks of dust while marveling at the cosmos, and Malick’s high-diction narrator pine for “time beyond sorrow” even as the greatest wonders of the earth track before your eyes, you realize that anxiety is present in all of these films. We project human emotions and relations onto penguins marching because we need relatable stakes, and because it’s hard to reckon with behavior we can’t fully fathom, with existences that don’t need our attention in order to matter. The tools of cinema are employed to bring us closer to things that might otherwise be unfathomably far away. Underwater photography in Cousteau’s films, zoom lenses in the nature films of the ’60s and ’70s, ubiquitous time-lapse, the super-duper slow motion pioneered in Planet Earth. Curiosity draws us in, but so does our need to grasp and tame. The voiceover—the guide, the conduit, the godlike comforter—explains it all in our language. The terms are set for our sakes, not for that of the beyond. The fact is that we need the help.

Werner Herzog’s films certainly merit discussion here. Works such as Encounters at the End of the World, Cave of Forgotten Dreams, and the recent Into the Inferno, dive headlong into the world’s (literal) dark tunnels without attempting to ameliorate audience anxiety. And just as many hear self-parody in Malick’s mode of quavering devotional VO, it’s not hard to anticipate how Herzog might spin grim facts of nature into existential fiats of futility. But therein lies a crucial difference. Embedded in much of Herzog’s discourse is a personal conviction in the dark heart of man, in a lack of meaning in the universe. Whether or not you agree with such pessimism—I’m afraid I often do, begrudgingly—there’s something also comforting in its reliability. The diagnosis isn’t pretty, but at least there’s a diagnosis.

With Malick and Sagan, however, there are only more questions. Each brings us into a conversation through a recognizable vocabulary. Malick’s is aural, often employing a loosely religious diction and tone, and Christian-themed orchestral and choral works. Sagan’s is visual and genre-oriented, setting the series inside an endearingly sci-fi, Star Trek-meets-Dr. Who set he calls the “Spaceship of the Imagination.” But language is only used to pose deeper and further questions. “Did love make me?” Blanchett asks—but of whom? “I fear you. You whom I should love.” She could be talking to God. Or nature. Or looking in the mirror. In Voyage of Time, it’s all the same. What matters isn’t of whom or what we’re asking, it’s that we’re asking—incessantly, helplessly. This can been terrifying, but it can also offer a measure of comfort. The same is true of even science and nature films that deal with these anxieties less frankly, and of documentaries in general. Comforting not in the way of packaged answers, but as a reminder that the world doesn’t revolve around us, that we don’t always have to bear the burden of meaning. 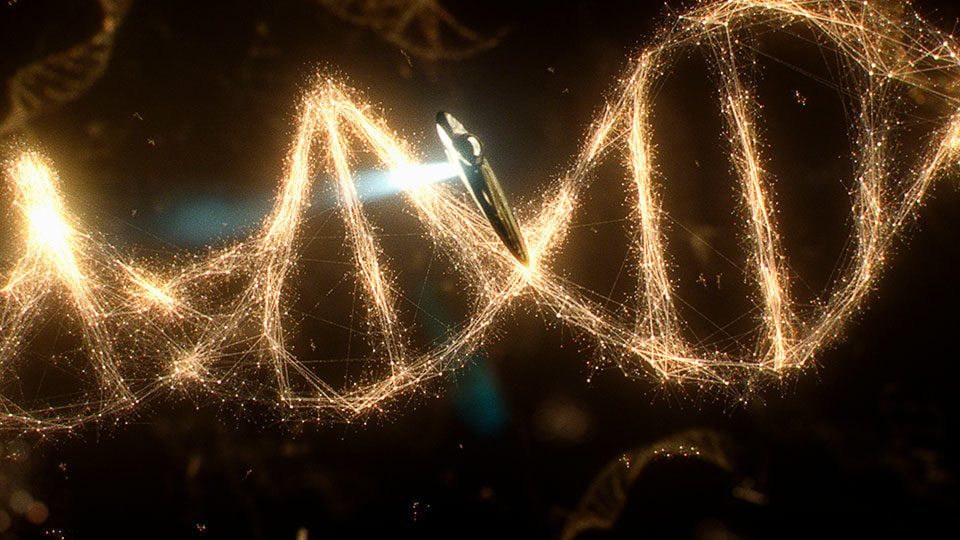 Sagan talks of the age of the cosmos, during which man has existed an infinitesimally short period. In Voyage of Time, humans don’t start showing up until the final minutes of the film—we’re a later, comparatively insignificant development. There’s little comfort in the unknown, little comfort in the notion that our lives might lack in meaning or import within the grand scheme of things. But when paired with the curiosity of Sagan’s and Malick’s projects, with their hunger to grasp and synthesize all that can be, we might be able to achieve a productive level of humility, where we can simultaneously look to the stars and internalize our star-stuff. In these films, art and science, the measured and the metaphorical, documentary and the speculative imaginary aren’t in conflict but rather in endless conversation, keeping each other honest, keeping each other company.