By Giovanni Marchini Camia on February 18, 2020 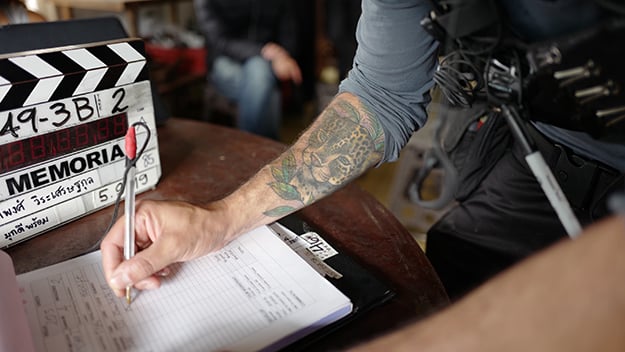 Dawn. Driving to the set, we pass the Centro de Memoria, Paz y Reconciliación. The word memoria is ubiquitous around Bogotá. In newspaper headlines, on museum exhibitions, graffitied across walls. In these contexts, it denotes the efforts at constructing a collective memory around the armed conflict that has afflicted Colombia, in varying degrees of intensity, since the 1960s. A memory suppressed by the official discourse, due to the violence’s ties to government corruption and its concentration in rural areas.

This isn’t why Apichatpong called his film Memoria, or only tangentially. In simplest terms, the title refers to the script being based on memories, his own and those of others, that he compiled during his extensive travels across the country. Through the protagonist Jessica [Tilda Swinton], a recently widowed expat, the film will convey his outsider’s impressions of Colombia and, by extension, his perception of the nation’s psyche. As such, the conflict and its trauma are ingrained in the fabric of the narrative. Without ever receiving mention, I expect they will be a presence throughout, hovering at the edges of the frame, much like the dictatorship in Cemetery of Splendour. In this respect, the location for the next three days of filming is especially evocative. We’re at the national university, where Jessica first runs into Agnès [Jeanne Balibar], an archaeologist she later accompanies on a work expedition hoping to find the source of the auditory hallucination that is causing her insomnia.

Founded in 1936 and informally called the White City on account of the color of most buildings, the Ciudad Universitaria de Bogotá has an intensely felt, very particular aura. The vast campus, originally modeled after the Bauhaus in Dessau, Germany, stretches across 300 acres of land dotted with modernist buildings of various ages, separated by expanses of grass and winding footpaths. Over the decades, it has become a locus of left-wing political action. The walls of the run-down buildings, seventeen of which have been declared national cultural heritage, are covered in colorful murals and graffiti bearing leftist slogans. On the main square, where Agnès is introduced in a sweeping pan, a massive stencil portrait of Che Guevara (vandalized with green paint) is flanked by another of Jaime Garzón, a Colombian journalist and activist murdered by paramilitaries in 1999. It’s a setting palpably pregnant with history—or “full of memories”, as Apichatpong puts it when discussing the university’s unique atmosphere.

The same is true of the production itself. Again and again, I’m struck by déjà vu. This morning’s set is in the faculty of medicine and when I arrive, I’m brought back to the shoot of Cemetery. That film’s first scenes were shot in an elementary school classroom converted into a hospital ward, and here the art department have replaced all the furniture in a seminar room with hospital beds and medical equipment. Sayombhu [Mukdeeprom, the DP] and his gaffer Giovanni [Barrios] don’t speak a common language, so they largely communicate through pantomime and by relying on the universality of technical terms, like the Mexican DP Diego García had done in Thailand. A medium shot of a patient asleep in bed with sunlight dancing across her face is strongly reminiscent of the sleeping soldiers in Cemetery, their features illuminated by rotating neon colors. As on the previous shoot, we have our meals in the cafeteria.

Recurrences, both within and across films, have always been essential to Apichatpong’s cinema. Considering the parallels on set, I’m intrigued by the possibility that these echoes might also derive from the circumstances of production, just as the serenity of his work methods seeps into the atmospheres of the films themselves. It will be fascinating to see how the radical differences to this shoot will shape the film, given that it’s his first feature shot in a country other than Thailand and in a foreign language—or two, even: Spanish and English. It’s also his first time working with professional actors (disregarding the anomalous The Adventure of Iron Pussy) and without all but two members of his regular Thai crew—Sayombhu and Sompot [Chidgasornpongse, the director’s assistant]—the core of which had accompanied him since the start.

And with a budget a little over twice that of Cemetery, Memoria is his most expensive film to date. The script comprises a much greater number of locations as well as some unprecedentedly fancy toys, such as a 500-foot dolly, apparently the longest in Colombian film history, which I’m told required sourcing every dolly track available in the country. Today, Apichatpong is particularly happy with a construction crane, for some reason painted in psychedelic rainbow colors, that stands outstretched in the parking lot with two giant M90 lights atop its platform—the ‘sun’ shining through the set’s third floor window.