1992’s Candyman had a wide focus, making use of horror tropes to traverse America’s slave-owning history and the gentrification and racist violence that took its place in the Cabrini-Green housing projects of 1990s Chicago. Tony Todd, the kind of actor who only needs to be in the same room as a camera to effectively project his presence, imbued the title role with melancholy, menace, and a sense of melodrama that befit his stated vision of the character as his very own Phantom of the Opera.

Nia DaCosta’s reinterpretation, co-written with Jordan Peele and Win Rosenfeld, seeks to drill down into the still-relevant themes of the original film—police brutality, cultural appropriation, and the devaluation of Black bodies—by restating them even more obviously. Here, we follow artist Anthony McCoy (Yahya Abdul-Mateen II), the grown-up version of a child kidnapped by the Candyman in the 1992 film. He’s recently moved to a slick, new apartment in the gentrified area that was once Cabrini-Green with his art-dealer girlfriend Brianna (Teyonah Parris). The legend of Candyman (the son of a slave and lover of a white woman, whose lynching made him an eternal specter of vengeance) still haunts the area, but with a renewed significance in a contemporary America where high-profile police executions of Black men are near-daily occurrences. McCoy, whose paintings depict symbols of anti-Black violence like nooses and chains, is experiencing a creative block exacerbated by a newfound unwillingness to commodify Black trauma. Ironically, he soon finds inspiration in the few remaining apartment complexes of the original Cabrini-Green grounds, and in its ur-legend of Black trauma—Candyman himself.

DaCosta’s Candyman claims to be a Black reclamation of Bernard Rose’s white-cast, white-written film, which played on the spectacle of forbidden interracial love to craft a gothic tragedy bursting at the seams with blood and camp. Since its protagonists are artists, and it is mostly set in the sterile world of galleries and exhibitions, the new Candyman finds maybe too many opportunities to pontificate on the evils of appropriation and Black trauma. When a pretentious white critic suddenly takes an interest in McCoy’s work after two people who had viewed his new exhibit, featuring mirrors and inviting the spectator to say Candyman’s name, are found murdered, she receives an earnest lecture from McCoy on why Black art is often misunderstood or outright dismissed by contemporary audiences. At points, the film feels like a satire of the vapid greed ubiquitous in the art scene, and the vulture-like hunger non-Black audiences have for Black pain. DaCosta even teases the tantalizing idea that, because of McCoy’s exhibit, Candyman could possibly go viral.

But Candyman takes itself too seriously to be much fun. The dialogue and the reworkings of the Candyman myth all present themselves too schematically as stern proclamations about the lingering pain of Black murder—a worthy subject that is nonetheless handled drearily here. Perhaps the film’s most irritatingly pedantic element is the convenient expansion of Candyman’s story: the film turns the name into a mantle of sorts—a franchise, if you will— that is taken up by other Black men brutalized by their generations’ prejudices (slavery, Jim Crow, police). “Candyman is how we deal with the fact that these things happened, that they still happen,” a character says at one point, in case the audience wasn’t grasping the message. DaCosta’s Candyman becomes a tool not just for vengeance, but for righteous, generation-spanning racial justice. This feels fitting given our culture’s current obsession with retooling old stories into vehicles for didacticism.

New interpretations have a tendency to flaunt their “relevance.” But Candyman was always relevant. The original painted the character as a seductive, hypnotic figure. That film’s baroque, almost art-house sensibility added a welcome aesthetic complexity that Nia DaCosta’s film lacks, despite (or perhaps because of) its technically impressive cinematography and some bewildering instances of CGI. The film’s self-important message, written in bold neon letters, saps it of scares. Before Candyman ends, there is one final injustice involving a Black person executed by the police. DaCosta tries to fashion a crowd-pleasing climax of retribution from this last scene, but ends up trading the chewy, prurient pleasures of horror for overwrought sermonizing.

Nicholas Russell is a writer and critic from Las Vegas. By Beatrice Loayza
In the cut: Spiral offers a topical spin on the popular franchise but makes one wonder: do we need solemn excuses to enjoy cheap thrills? 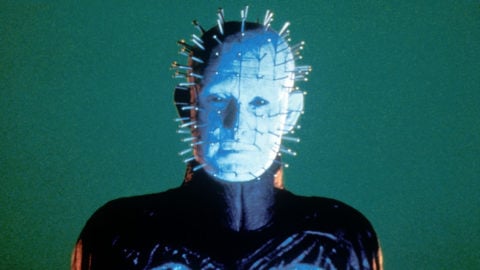 By Michael Koresky
What’s your pleasure? Clive Barker’s Hellraiser couples S&M with a heavy dose of homoeroticism that makes it an unapologetic violation of heteronormative standards By Matt Morrison
The frighteners: Bernard Rose on his Frankenstein, Mickey Keating on Darling, and Corin Hardy on The Hallow

By Beatrice Loayza
In the cut: Spiral offers a topical spin on the popular franchise but makes one wonder: do we need solemn excuses to enjoy cheap thrills?

By Michael Koresky
What’s your pleasure? Clive Barker’s Hellraiser couples S&M with a heavy dose of homoeroticism that makes it an unapologetic violation of heteronormative standards
Subscribe to the Magazine Article from the May-June 2019 issue

Free to Be You and Me

By Soraya Nadia McDonald
In Jordan Peele's Us, the doubled characters of Adelaide and Red pose vexing questions about assimilation in America

By Matt Morrison
The frighteners: Bernard Rose on his Frankenstein, Mickey Keating on Darling, and Corin Hardy on The Hallow