There’s a story about Martha Coolidge which speaks volumes. She was casting her first narrative feature, Valley Girl (1983), and was stuck finding an actor to play Randy, the male lead. She glanced at the “reject” pile of headshots, picked up the one on top, and said, “We need someone like this guy.” “This guy” was an unknown named Nicolas Cage. His audition was phenomenal, and his chemistry with Debbie Foreman (cast as Julie, the “Valley Girl” of the title) was electric. It was only later that Coolidge realized he was a Coppola. (She had worked for Zoetrope for a couple of years, but had never met him.) Cage has said he felt weighed down by his last name, and this was the first time he was cast in something “on his own.” An interesting side note: the producers of Valley Girl were men, and hesitant about Cage as a romantic lead. They didn’t think he was sexy. Coolidge said, “Trust me. He’s sexy.”

Written by Wayne Crawford and Andrew Lane, Valley Girl was extremely low-budget, and shot in 20 days. Having spent a couple of years immersed in the burgeoning music scene of 1980s Los Angeles, Coolidge used all of that knowledge in the film, especially in the scenes when Julie ventures into a rock club with her new beau. Coolidge suggested two scenes to be added: when Julie and Randy fall in love and when they break up, essential contributions. The original script was a humorous sketch of the culture clash between Hollywood and the Valley. Coolidge, though, sensed something else, the opportunity to get at the feeling of teen desire, the painful sweetness of first love, of what happens between two people drawn to one another like magnets. In Coolidge’s commentary track for Valley Girl, she explains:

“I felt from old movies that the most important thing that you can do in a movie is to play wanting. It isn’t actually the getting of the person that is hot on the screen. It’s the wanting. It’s the electricity… The eye contact, the reflecting of each other that people do, and that the old actors from old Hollywood really knew how to do, because they couldn’t show nudity then, they couldn’t show all the things they could show today, and I wanted very much for Randy and Julie to really have that great desire and electricity together. This is the theory of electricity and wanting.” You can feel this in the montage in Valley Girl, when Julie and Randy walk, laugh, kiss, with a series of different lit-up neon signs behind them. It captures the feel of a warm summer night when you’re 16 and in love. In re-watching it, I flashed on Quentin Tarantino’s gorgeous neon-sign montage in Once Upon a Time… in Hollywood. Michael Bowen, who played the preppy ex-boyfriend in Valley Girl, and has since gone on to appear in a number of Tarantino’s films, said that Tarantino was always quoting lines from Valley Girl at him; he knew them by heart! If it’s a subconscious homage, it is an incredibly tender one.

Another of Coolidge’s contributions was diversity in background casting, making her way ahead of her time. The stereotype of the Valley was that it was all-white, but of course that isn’t the case, and Coolidge cast many different types of people for the Valley party scenes. It may not look like much by today’s standards, but compared to the blinding white of John Hughes’s entire filmography, it stands out, and makes you wonder how the landscape might have been different had Martha Coolidge and not John Hughes been the Narrator of Teen Experience in the 1980s.

Valley Girl was a surprise hit. In a 1991 Film Comment cover story on Coolidge (featuring Laura Dern on the front), critic Robert Horton singles out the scene where Julie and Randy fall in love at a punk club in Hollywood: “That just-right moment, the red light and the shift in music timed with the cut, was my first impression of Martha Coolidge . . .  It’s the kind of thing that buys a lot of goodwill, and ever since then I’ve found myself rooting for her.” Me too.

While working on this piece, I mentioned to a couple of people the subject matter, and when I said, “Coolidge directed Valley Girl—” every single person said, “I love that movie!” and listed scenes they remembered, even though, in many cases, they hadn’t seen the movie since it was released almost 40 years ago. My brother-in-law said, “There’s that montage scene with ‘I Melt With You’ playing underneath it…” He hadn’t seen the film in decades! Coolidge’s next movie, Real Genius, two years after Valley Girl, has also had a long shelf life, despite not being a hit at the time. The director cast a young Val Kilmer in the lead role, showing again her uncanny gift for plucking people out of the pack. Just a year into his career, Kilmer is a revelation as carefree genius Chris Knight, who helps others to loosen up and have fun. He is a far more appealing and motivational figure than Ferris Bueller—playing a similar role in his friends’ lives—who arrived the following year. Not a Pretty Picture (Martha Coolidge, 1976)

Coolidge hails from Connecticut, and attended the Rhode Island School of Design. After graduating from RISD, Coolidge interned at the American Film Institute, working under Robert Wise. She has often spoken about the experience, saying, “The traditional aspects of storytelling—there’s nobody better to learn that from than the old-school guys.” She has also taken acting classes, specifically to learn more about actors’ processes. She started off making documentaries, two of which can be viewed here on Coolidge’s Vimeo page. An Old-Fashioned Woman (1974) features Coolidge interviewing her grandmother. In 1976, she directed Not a Pretty Picture, in which she attempts to come to terms with having been raped in high school. The movie is way out on the edge, avant-garde almost, and very “meta”, but the end result is not distanced or abstract. She cast actors to play herself at 16, her friends, the rapist—and then she films the rehearsal process, stopping to discuss things with the actors. It’s an extraordinary project.

Coolidge was part of a new wave of American female filmmakers in the ’80s, people like Amy Heckerling, Euzhan Palcy, Nancy Savoca, Penny Marshall, Susan Seidelman, Penelope Spheeris, Jennie Livingston, and Kathryn Bigelow. Many of these women directed box office hits, movies considered classics today, like Fast Times at Ridgemont High, Desperately Seeking Susan, and Big. Things changed in the ’90s, with Bigelow one of the few directors from this group still in play (and she directed action films, a stereotypically male genre). Coolidge, finding it difficult to get projects off the ground, switched to television, for the most part. Over the years, she’s directed television movies and episodes of The Twilight Zone, CSI: Crime Scene Investigation, Drop Dead Diva and Sex and the City. Film projects were less frequent, but there are some standouts. Angie (1994) is almost a forgotten film, but it features Oscar-winner Geena Davis and James Gandolfini (post-True Romance but pre-Sopranos). Angie is a poignant character study of a decidedly imperfect heroine, the kind of film “they” just don’t make anymore.

But before Angie came the mighty Rambling Rose, with a script by Calder Willingham (Paths of Glory, One-Eyed Jacks, The Graduate). The film was about 17 years in the making; producers shied away from the sexual content and the hysterectomy plot point. Eventually, Laura Dern got ahold of the script, and brought it to her then-boyfriend, producer Renny Harlin. Coolidge said later, “I had to make that movie. It became mine the second I read it.” While the film is told from the POV of the young boy (Lukas Haas), it is Rose’s story. Rose’s boundaries have been compromised by sexual abuse, and Coolidge treats the character with tenderness, not prurience or disdain. I saw it when it opened, and loved it, but was particularly stunned by one of Robert Duvall’s moments. “Daddy” (Duvall) and “Mother” (Diane Ladd) meet with a sinister doctor (Kevin Conway), who recommends a hysterectomy for the promiscuous Rose. Daddy agrees it’s probably a good idea, and Mother rises up in outrage. In response, Duvall goes as deep as he has ever gone, experiencing layers of painful self-reckoning, before admitting—devastated with himself—that he was wrong. I was able to ask Coolidge about that moment when the film screened at Ebertfest, and she said Duvall did the moment just once: “It was definitive.” 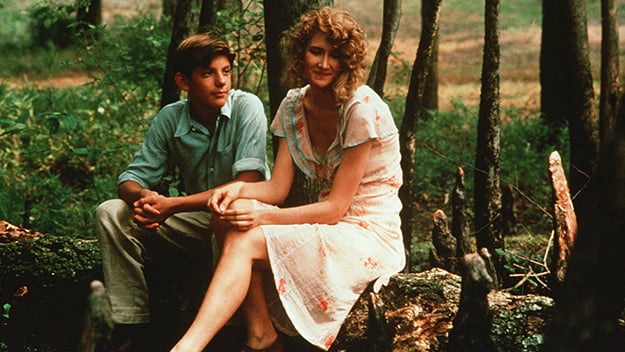 Coolidge gives actors lots of room, and yet is able to step in if an actor gets stuck (maybe this is from her acting training). When filming the breakup scene in Valley Girl, neither actor was really “getting it.” Coolidge took Cage aside, saying to him: “In this scene, you are hurt, but not defeated.” Cage has referenced that piece of direction often, saying how important it was to him, and how he still uses it in his work to this day.

When Coolidge was nominated president of the Directors Guild of America, she was the first woman to serve in that capacity. According to an article in Vanity Fair, for decades “speakers at Directors Guild meetings began their comments with ‘Gentlemen and Miss Lupino,’ as Ida Lupino was their only female member.” Coolidge’s tenure (2002-2003) was brief and stormy: she encountered resistance from some male members, but spearheaded diversity efforts (and continues to do so).

But what have we missed out on, culturally, with Coolidge’s absence from the big screen? Where were her opportunities after turning a low-budget film like Valley Girl into a financial hit? What other stories could have been told, had she been given more opportunities? As she wrote in a 2012 op-ed for The New York Times, “studios are always on the lookout for the next ‘boy wonder.’” This has always been true in the industry, from Orson Welles to Steven Spielberg.

Coolidge’s piece is a clarion call still echoing in our ears: let’s keep our eyes peeled for “girl wonders,” too. Because they’re out there.