All images from Aliens (1986, James Cameron)

In the director’s cut of Aliens (1986), James Cameron’s sequel to Ridley Scott’s nihilistic, gloomy Alien (1979), there’s a moment when Ripley (Sigourney Weaver) watches a rescue plane crash, dashing any hope of an easy exit from LV-426, the alien-infested exomoon to which she has returned voluntarily, this time with a group of ferocious Marines, many of whom resent her authority. As everyone races for cover in a nearby structure, Ripley, twitchy with PTSD, hesitates. Corporal Hicks (Cameron regular Michael Biehn) turns back, sees the look on her face, and asks, “You all right?” Hicks’s quick check-in of concern is the beginning of a bond that courses through the film on its own idiosyncratic current. It never becomes a romance, but as the situation deteriorates a quiet space opens up between them where they become powerful allies. The film surges with images of motherhood, birth, amniotic fluid, and child rearing, and Ripley—a figure both butch and femme (Weaver’s stock-in-trade)—finds herself in accord with a rare warrior who vibrates with openness and vulnerability (Biehn’s stock-in-trade, seen also in The Terminator). Their dynamic doesn’t get a lot of screen time (and much of its subtlety was lost in cuts for the theatrical release, restored in the director’s cut), but its presence is crucial to Aliens, piercing through the tension with moments of softness, respect, even desire. Hicks and Ripley are an unlikely pair, but “unlikely pairings” are the bread and butter of romance, Hollywood-style, and Hicks and Ripley are in the continuum of tough guys and tough dames, who come together against the societal odds, to meet on equal terms.

The other men on the mission react to Ripley in predictable ways. Paul Reiser’s Burke is condescending and slimy. Bill Paxton’s Hudson is all bluster (he, predictably, falls apart after the first alien encounter). Most of the Marines have a steep learning curve in accepting Ripley’s authority. Aliens plays with the classic trope of Underestimated Woman who “shows up” a group of men, but undercuts said trope with Corporal Hicks, who bucks the trend. The guy is such a cool customer he sleeps like a baby through the ship’s bumpy descent to LV-426. Bristling with weaponry and armor, he’s as macho as they come, but so macho he requires no learning curve. Her strength doesn’t threaten him. When she shows off her skills in the power loader, Hicks grins ear to ear, enjoying her triumph over other people’s low expectations. When he asks her “Are you all right?” he’s not sniffing out her weakness. He’s a human being reaching out a hand to another human being. There are many such moments to follow, as Ripley and Hicks merge into a coalition. One of the highlights is when Ripley reminds Burke that Hicks—a lowly corporal—is next in the chain of command. Aliens is not just about Ripley stepping into her power; Hicks does so as well, and neither have to sacrifice anything to let the other shine. This is how things should work.

Although the genres are different, the Ripley-Hicks relationship features remnants of glittering 1930s comedies, when duos like William Powell and Myrna Loy dominated the screen in The Thin Man, or Cary Grant and Rosalind Russell traded vicious barbs in His Girl Friday, all while he frankly acknowledges her superiority to everyone in the room, including himself. When Hicks asks Ripley how long it’s been since she’s gotten some sleep, she replies, “I can handle myself.” He cracks gently but pointedly, “Yeah. I’ve noticed.” If Burke had asked her the same question, he would have done it in a tone that diminished her.

Recently, Wesley Morris wrote about the sad demise of rom-coms, saying, “They take our primal hunger to connect with one another and give it a story. And at their best, they do much more: They make you believe in the power of communion.” This “power of communion” can create a kind of utopia, a trembling space of possibility where mutual misunderstandings between men and women become, if not irrelevant, then manageable (and maybe even sexy). A. S. Byatt’s 1990 novel Possession was about many things, but one of its central interests was how difficult it is in a fractured postmodern world (particularly in academia) for people to hear each other, to obey E. M. Forster’s command to “only connect.” Through the course of Possession, two scholars, a man and a woman, mutually disdainful of the other’s area of study, trip over a mystery and must solve it together. There’s a lot of polluted water under that cultural bridge, but by the end a fragile space has opened. As Celine says in Richard Linklater’s Before Sunrise, “I believe if there’s any kind of God it wouldn’t be in any of us, not you or me, but just this little space in between. If there’s any kind of magic in this world it must be in the attempt of understanding someone sharing something. I know, it’s almost impossible to succeed but who cares really? The answer must be in the attempt.”

You wouldn’t expect the harrowing Aliens to have embedded in it that “little space in between,” where Hicks and Ripley “only connect.” He trains her in weaponry; she trains him in alien behavior. It’s like a dance. Male ballet dancers have one main job: to lift the women up. In so doing, they show off their strong thighs and tremendous power. You can’t have one without the other. When it’s all operating well, everybody wins. As Liz Phair sings in “My Bionic Eyes”

Show me a man you cannot break
And I will show you heaven.

Hicks can’t break. Hicks is heaven. It’s no surprise that there are Internet libraries full of Ripley-Hicks slash-fic. 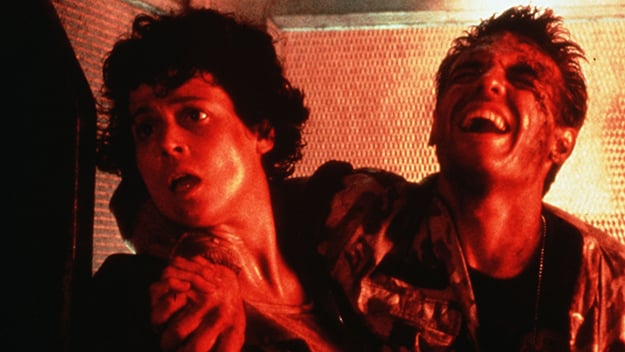 It is only in the director’s cut of Aliens that we learn Ripley’s first name is “Ellen.” All business, she charges past the injured Hicks, before stopping to say in an almost hopeful tone, “See you, Hicks…” When he says, “Dwayne. It’s Dwayne,” in gigantic close-up, the subtext turns text. Weaver, caught in his gaze, in the shattering of rank, in the rise of something being acknowledged, says, without prompting, “Ellen.” Eyes glinting with flirty mischief and intimacy, he sends her off with, “Don’t be gone long, Ellen.” It’s as though they’re suddenly in bed, in a world where they could be who they want to be to each other. As father-figure to the abandoned child Newt, as husband-figure to Ripley, Hicks is essential in creating the “found family” of the reproduction-obsessed storyline of Aliens. It’s impossible to imagine the film without him.

Aliens is a gender-twisting miasma, where Female-ness is multiform: it’s a monstrous spectacle in the procreating Alien Queen; it’s the muscular Vasquez (Jenette Goldstein) taking no prisoners in her words and deeds; it’s Ripley, her tall, lanky frame quivering with trauma and strength; it’s Newt, with her birthright of tenacious survival smarts. Talk about opening up space. There’s nary a “traditional” woman in sight.

Susan Weaver chose “Sigourney” as her stage name after a character briefly mentioned by the flapper Jordan Baker in F. Scott Fitzgerald’s The Great Gatsby: “Please come and see me…Phone book…Under the name of Mrs. Sigourney Howard…My aunt…” What is so great about this is that “Sigourney” is the husband’s name, not the wife’s. Weaver was fully aware of her gender-destabilizing persona. She got her start as Christopher Durang’s muse, whose plays run along these fault-lines, social and cultural norms lampooned with a cynical campy sensibility. Weaver is a unique figure in film, particularly for a leading lady, and the “romance” with Hicks creates a charged atmosphere where both characters get to rise and thrive. Like very few things (in life or in film), it’s perfect.