The term “formalist” is partnered with the word “rigor” often enough that it’s hard to say one without automatically following it up with the other. Like morbidly obese or stark-raving mad, formalist rigor isn’t just descriptive of a process—it codifies that process as well as the words themselves. As employed in this formulation, rigor isn’t just an ethic, it implies a kind of patterned strictness, a form that contains and defines content with regularity and fidelity. In art, formalist rigor can verge on the scientific or mathematic, with predetermined rules followed faithfully, often transparently. In cinema, think of films comprised of one shot, or a series of shots of the same length, or of certain decisions about the filmmaking apparatus—tripod shots only, handheld only, consistently controlled pans or zooms—carried through to the end.

Yet what of a formalism that’s dialed back a bit, that’s flexible, organic, and responsive? Such elasticity isn’t better or lesser than rigorist approaches—in documentary film in particular, it’s just a different mode of seeing, expressing, and interpreting the world. In two superb new films, strong formal gambits are executed with varying degrees of plasticity. In Brett Story’s The Prison in Twelve Landscapes, which premiered at the True/False Film Fest and recently closed Art of the Real at the Film Society of Lincoln Center, the title’s James Benning–like proposition is leavened by a central and meaningful irony, as well as a less-than-metronomic deployment. And in AJ Schnack’s Speaking Is Difficult, the latest short from Field of Vision, the series from First Look/Intercept overseen by Schnack, Charlotte Cook, and Laura Poitras (for whom I conduct interviews with filmmakers), sequences that might seem to progress with ruthless regularity actually breathe unevenly and intuitively.

There’s actually both precision and abstraction in Story’s title. Indeed it’s comprised of 12 segments recorded in 12 locations, but that awkward grammatical article isn’t mere affect. It’s not this, that or “a” prison she’s looking for, it’s “The Prison” as institution and idea, American style. Her idea about that idea is clever, damning, and convincing: that to best understand the culture of incarceration in 2016 isn’t to film inside but rather outside of correctional facilities, where America’s prison industrial complex affects innumerable and fundamentally vital aspects of life—from laws and economies to the ways we treat and understand one another. Actual prisons don’t come into view until the very end of the film, but we feel and see their effects throughout. The Prison in Twelve Landscapes

While the critique of Story’s conceit holds up extremely well, what I found so engrossing about The Prison in Twelve Landscapes—what makes it work as a movie, and not just an argument—was its unevenness. As they succeed, each section is a departure in terms of location, content, scope, and duration. Some are impressionistic and elliptical, like an early section set in Eastern Kentucky, where the local industry has shifted from strip mining to prison construction, and others feel like self-contained shorts, such as a visit to a Bronx mail/storage facility where it’s revealed that record companies still produce cassette tapes specially for prison use. A section on registered sex offenders gets scored to intolerant talk radio, while in Detroit an employee at Quicken Loans gives us a cringe-worthy onscreen tour of their fancy, characterless gentrified digs.

Cool, emotive, meandering, direct—Story allows for a range of tones and tacks before finally tipping her hand with an archival-based look at the racism behind the Nixon-era War on Crime. The sequence is swiftly and powerfully followed by an extended visit to St. Louis County, where a black resident tells of harrowing degradation over an unpaid garbage disposal fine, and where the camera pans across an epic line of non-white faces waiting to pay similarly petty tariffs outside a court house. Such fines nakedly profit from the poor by collecting on violations often directly related to that poverty; the interminable lines themselves are a form of punitive social control. It’s the most didactic sequence in the film, but held back until the end, after more subtle evidence of a broken system has accrued, it feels earned. Story’s 12-part structure is both an assertion and a vessel, and crucially the latter serves the former, allowing for both anecdote and essay, whisper and shout, without any of it reading as either a tonal or formal violation. Sometimes the formalism is rigorous, other times it’s vigorous, but regardless, subject is prioritized rather than the conceit itself.

The conceit of Speaking Is Difficult is so simple and perfect (and affecting) that its implementation can seem more regimented than it is. Starting with San Bernardino, California (dateline December 2, 2015) and ending with Tucson, Arizona (dateline January 8, 2011), the film visits, in reverse chronology, 25 locations where mass shootings have taken place in the United States. Between the reverse chronology, the emphasis on locations rather than characters, a tripod-based shooting strategy, and a matching of that blank-stare approach with harrowing 911 calls and police recordings, Schnack’s 14-minute film isn’t short on rules or parameters. But as with The Prison in Twelve Landscapes, those definitions focus our attention on what’s not there, on what’s uncontainable by the form. As Schnack’s locations keep coming, I’m torn between feeling grateful and resentful for the progression. The events are so grim that I need the respite, but I’m also never through contemplating what happened, or imaginatively repopulating the landscape, before a cut to black cues another sequence, starting it over again. The scenes don’t blur in my mind—each location registers all too vividly—but my emotions carry from one to the other, doubling my immediate memories over the memories that these pictures and sounds represent. The Prison in Twelve Landscapes

The number of shots at each location varies, as does the content of those shots—sometimes what we see is so banal that it’s hard to imagine the horrors that transpired there, while at other times the flow and density of life passing before our eyes makes it all too easy—and as does the length of each sequence. The audio recordings give each location a terrifying immediacy, and give shape to the sequences far more than the shots or overall structure does. Rather than a merciless deployment of 25 austerely shot vignettes of place, the visual component of Speaking Is Difficult is ultimately more like a series of empty landscapes, like a starter kit for amateur artists onto which we paint our own visions of what we imagine based on the audio. The form is perfectly laid out for us, but content is completed by the viewer. And as with Story’s film, leaving that room for the viewer provokes thought, empathy, ownership—far more than any info dump doc or activist propaganda film ever could. These are appeals to see and to hear, as freshly as possible, the world we live in and the world we’ve created. The form directs our attention—overtly and entrancingly so—but precisely what’s observed, and what’s made of it, is left for us to experience and contemplate. We’re taken to these places, then left to figure how far we’re willing to travel. By Film Comment
Nothing but the truth? Three programmers discuss this year’s lineup of nonfiction and experimental film (and everything in between) 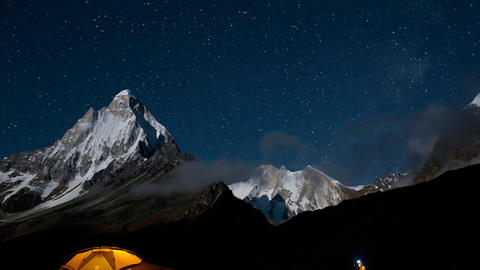 By Film Comment
Nothing but the truth? Three programmers discuss this year’s lineup of nonfiction and experimental film (and everything in between)

By Eric Hynes
Adam McKay made a documentary. At least, 70 years ago we would have called it that. Our intrepid columnist explains
Subscribe to the Magazine